At least 28 people, including five children, were killed and 30 others injured when a suicide bomber shouting 'Allahu Akbar' blew himself up inside a mosque packed with worshippers for Friday prayers in Mohmand Agency in Pakistan's restive northwest tribal region. 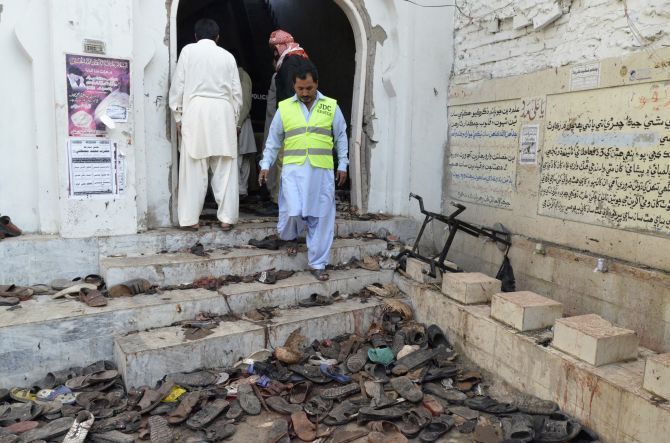 The attacker blew himself when the prayers were in progress at the mosque in the Anbar tehsil of the agency bordering Afghanistan.

"A suicide bomber was in the mosque. He shouted 'Allahu Akbar' and blew himself up," Assistant Political Agent Naveed Akbar told media persons.

He said that Friday prayers were being offered around 2pm when the powerful blast took place.

At least 28 people, including five children, were killed in the attack and 30 others injured, Pakistani media reported, citing officials.

"Many people were gathered inside the mosque when a suicide bomber blew himself up," an eyewitness said.

Rescue teams and police rushed to the spot. The bodies and the injured are being shifted to local hospitals for medical treatment.

Injured were also taken to hospitals in Bajaur Agency, Charsadda and Peshawar for treatment.

There was no immediate claim of responsibility, but Pakistani Taliban routinely targets courts, schools and mosques.

Prime Minister Nawaz Sharif has expressed his grief over the loss of lives in the blast.

"The cowardly attacks by terrorists cannot shatter the government's resolve to eliminate terrorism from the country," he said in a statement.

The attack came on a day when Sharif vowed to continue the war against militancy and terrorism till elimination of the last terrorist.

During a meeting with Army chief General Raheel Sharif on Friday, the prime minister expressed the resolve to continue the war against terrorism and militancy.

The army had launched operation 'Zarb-e-Azb' in June 2014 to flush out militant bases in the northwestern tribal areas.