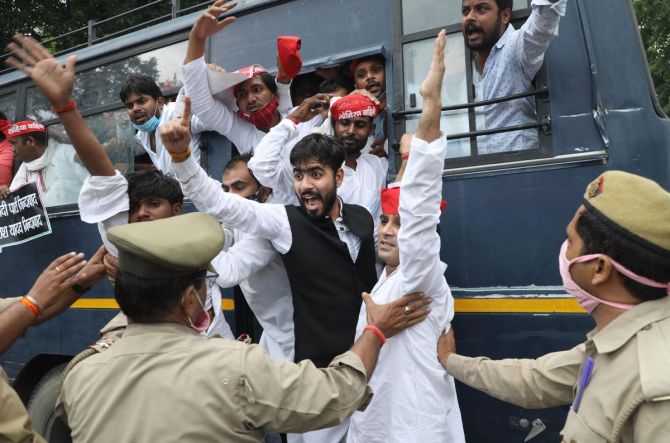 IMAGE: Police personnel detain Samajwadi party workers during a protest against the central government for conducting NEET and JEE exam amid the coronavirus pandemic, near Raj Bhawan in Lucknow, on Thursday. Photograph: PTI Photo

Noting that over 17 lakh out of nearly 25 lakh candidates have already downloaded admit cards for the medical and engineering entrance exams, Union Education Minister Ramesh Pokhriyal 'Nishank' said his ministry has been receiving e-mails from students and parents that these exams should not be further postponed.

The minister's remarks came a day after seven chief ministers of non-Bharatiya Janata Party ruled states agreed to the need for filing a review petition urging the Supreme Court to reconsider its recent order rejecting the postponement of the competitive exams.

Congress and various opposition parties have demanded that NEET and JEE examinations be deferred due to the COVID-19 pandemic and floods in parts of the country, even as the Union government has made it clear that they will be held as per schedule with due precautions.

On Thursday, Odisha Chief Minister Naveen Patnaik also spoke to Prime Minister Narendra Modi over the phone and requested him to postpone NEET and JEE exams, in view of the COVID-19 pandemic and the flood situation in the state, a senior CMO official told reporters in Bhubaneswar.

Two days ago, Patnaik had also written a letter in this regard to Nishank.

During his conversation with the prime minister, the chief minister explained that Odisha is in the grip of a pandemic as well as flood, and students might face difficulties in appearing for the examinations, the official added.

Amid the growing chorus for postponement of the exams, over 150 academicians wrote to the prime minister to assert that delaying the medical and engineering entrance exams any further will mean compromising the future of students.

Directors of several Indian Institutes of Technology (IITs) also said that more delay in conducting these exams will lead to a 'zero academic year' and any quick alternative to the crucial exams will dilute the quality of education and have cascading effects.

"National Testing Agency (NTA) officials told me that over 7 lakh candidates have downloaded JEE-Main admit cards while over 10 lakh aspirants have downloaded NEET admit cards. This shows that students want the exams be held at any cost," Pokhriyal said.

He also added that 'we have received mails from students and parents who are in favour of holding exams as they have been preparing for the exams from at least two three years.

'The Supreme Court too opined that full academic year can't be wasted. After two deferments, exam dates have been finalised'.

Accusing the Congress of playing politics, BJP general secretary Bhupender Yadav said the opposition party 'believes students must lose a year so it doesn't lose an opportunity for politics'.

The group of over 150 academicians from various universities in India and abroad also said in the letter to Modi that 'some are trying to play with future of students to propel their own political agenda'.

'The government has announced the dates for JEE-Mains and NEET any further delay in conducting the exams will result in waste of precious year for students.

'The dreams and future of our youth and students cannot be compromised at any cost.

'However, some are trying to play with the future of our students simply to propel their own political agenda and oppose the government,' the letter said.

Meanwhile, Dravida Munnetra Kazhagam president M K Stalin on Thursday urged the Chief Ministers of Andhra Pradesh, Telangana, Kerala and Odisha to join seven other states and approach the Supreme Court to seek deferment of this year's NEET and the JEE.

The Left parties also opposed the Centre's decision to hold the exams in September amid the COVID-19 pandemic and said it completely undermines the health concerns of students.

However, heads of various IITs had a different opinion on the issue.

Sarit Kumar Das, Director, IIT Ropar, who is also a member of the Joint Admission Board (JAB) of IITs, said the decision to conduct the exams in September has not been taken overnight but after due consideration.

According to Virendra Tewari, Director, IIT Kharagpur, 'the exams have a global reputation for seeking excellence and are considered one of the toughest and prestigious examinations in the world. A quick alternative to these tests will certainly not be as gratifying as competing for this examination by all fair means.'

Tiwari also said an alternative could be misused as a precedent to dilute the entire admission process to the IIT system which may prove to be harmful for the quality of undergraduate education at the IITs.

"I urge the aspirants to take it up as a challenge and show their mettle and sincerity to the world," he added.

These exams have already been deferred twice in the wake of the novel coronavirus pandemic. JEE-Main was originally supposed to be held from April 7-11, but postponed to July 18-23, NEET-UG was originally scheduled for May 3, then pushed to July 26.