Indo-US ties not to counterbalance China, says US

President Barack Obama's enthusiasm for a stronger Indo-US relationship is not to "counterbalance" China's growing influence over Asia, a top American official has said.

"I don't think you heard anybody say that in the course of the President's three-day visit (to India), we're looking to counterbalance China in any way," Robert Blake, Assistant Secretary of State for South and Central Asia, Robert Blake, told journalists in New York and Washington during a digital video press conference.

"The President repeatedly made clear that we want a positive, cooperative and constructive relations with China in the same way that India does," he said. Blake asserted that Obama's trip was to support India's expanding role in global institutions and Asian institutions, but the backing is not at China's cost.

"I think this is much more about how to expand India's role in some of these global institutions and in some of the Asian institutions, and we expressed clearly our support for that. But we do not see that growing role as coming at the expense of China," he said, pointing that Secretary of State Hillary Clinton had recently said that "we do not seek to contain China."

for Permanent Membership in the UN Security Council, US media pointed out that this was to counterbalance China. "By endorsing India for a permanent seat on the United Nations Security Council, President Obama on Monday signaled the US' intention to create a deeper partnership of the world's two largest democracies that would expand commercial ties and check the influence of an increasingly assertive China," the New York Times said.

The Los Angeles Times reported "the endorsement, though of little practical value at the moment, is aimed at boosting relations with India, and is a signal of the administration's vision of Asia at a time when China's influence is growing." Acknowledging former President George Bush's trip for the civil nuclear deal, Blake asserted New Delhi and Washington were entering into a "more mature" relationship following Obama's visit.

"It will mark the first time that we have real embarked on serious specific global cooperation," Blake said, ticking off several areas such as agriculture, cooperation in Afghanistan, women's development and maritime cooperation. "This is really a global strategic partnership now and we've started to put the flesh on that in very concrete ways," he added.
Lalit K Jha and Betwa Sharma
Source: PTI© Copyright 2020 PTI. All rights reserved. Republication or redistribution of PTI content, including by framing or similar means, is expressly prohibited without the prior written consent.
Related News: Barack Obama, Robert Blake, China, India, New York Times
SHARE THIS STORY
Print this article
Gandhi among Obama's heroes, says US
Access to Headley is a closed chapter: US 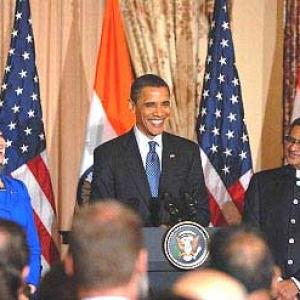