China on Tuesday urged US Secretary of State Mike Pompeo to stop sowing discord between Beijing and countries in the region, undermining regional peace and stability, amidst his visit to India for a high-level dialogue aimed at further ramping up their overall defence and security ties, and boost strategic cooperation in the Indo-Pacific. 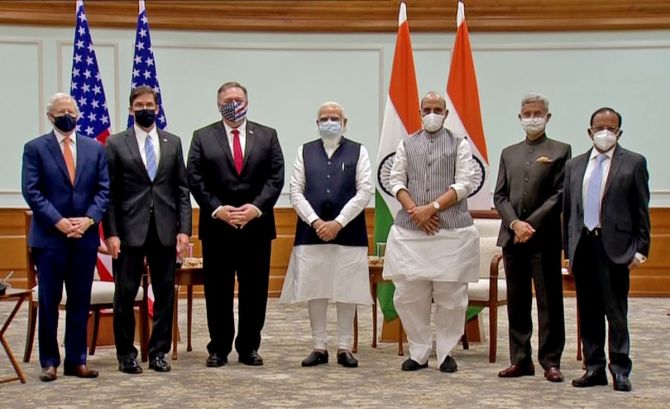 Pompeo arrived in India on Monday along with Defence Secretary Mark T Esper for the third edition of the US-India 2+2 dialogue with their counterparts, External Affairs Minister S Jaishankar and Defence Minister Rajnath Singh.

After his India visit, Pompeo is due to visit Sri Lanka and the Maldives.

Asked about Pompeo's visit to India and other South Asian countries during which the top US diplomat's focus would be on China's threats, Chinese foreign ministry spokesman Wang Wenbin told a media briefing in Beijing that 'Pompeo's attacks and accusations against China are nothing new.'

'These are groundless accusations which reflect that he is clinging to the Cold War mentality and ideological biases. We urge him to abandon the Cold War and the zero-sum game mentality and stop sowing discord between China and regional countries as well as undermining the regional peace and stability,' Wang said.

His remarks came amidst India and the US signing the landmark Basic Exchange and Cooperation Agreement that will allow sharing of high-end military technology, classified satellite data and critical information between the two countries.

The signing of the long-negotiated BECA between the two strategic partners also signals further boosting of bilateral defence and military ties, and it comes against the backdrop of India's tense border standoff with China in eastern Ladakh.

In August, Pompeo said that China poses a threat to the West that is in some ways 'worse' than that posed by the Soviet Union during the Cold War.

'What's happening now isn't Cold War 2.0. The challenge of resisting the CCP (Chinese Communist Party) threat is in some ways worse. The CCP is already enmeshed in our economies, in our politics, in our societies in ways the Soviet Union never was,' he had said in a speech to the Czech senate.

In July, Pompeo criticised China for its aggressive moves against its neighbours, including 'instigating' a deadly confrontation with India in eastern Ladakh, saying Beijing cannot threaten countries and bully them in the Himalayas.

'The recent clashes initiated by the People's Liberation Army are just the latest examples of the Chinese Communist Party's unacceptable behaviour,' Pompeo had said.

'It's important that democracies like ours work together, especially as we see more clear than ever the true scope of the challenge posed by the Chinese Communist Party.' 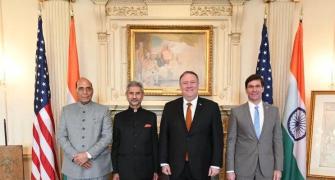 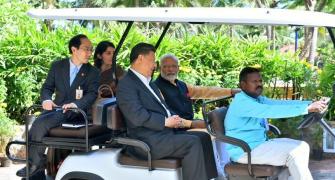 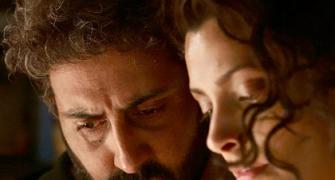