Some farmers in Haryana destroyed their wheat crop in protest against the Centre's new agriculture laws, prompting political and farmer leaders to appeal to them not to resort to such drastic measures. 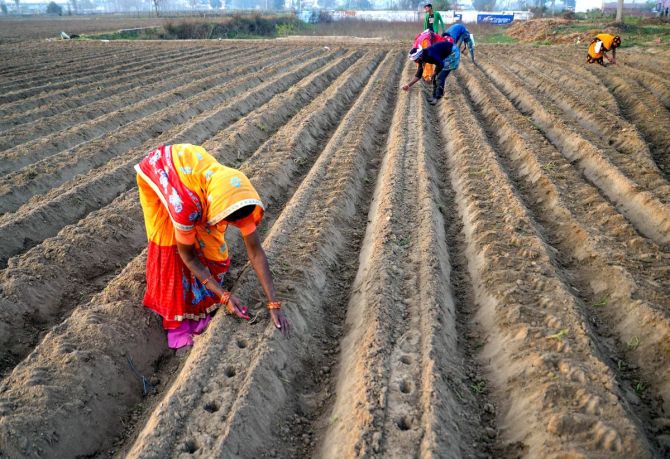 Some farmers in the state's Karnal, Jind and Ambala districts had destroyed wheat crops over two to four acres of their land.

In Karnal's Mundigarhi village, a farmer destroyed his wheat crop on four acres on Tuesday. The farmer told reporters that he did it in protest against the new farm laws.

Another farmer at Manakpur village, around 3 km from Ambala City, flattened his wheat crop over one acre.

Gurpreet Singh, who wanted to destroy the crop over five acres, was prevented from doing so by local BKU leader Gulab Singh.

Gurpreet told reporters that he was annoyed over the attitude of the Union government as it was not repealing the farm laws.

In the past a couple of days, some farmers destroyed their crop on few patches of land using their tractors, prompting Haryana BKU chief Gurnam Singh Chaduni to appeal to them not to take such a step.

Chaduni appealed to them not to take such a step, saying the Centre will not be moved by such measures.

"Since the past a couple of days, we have been receiving reports that farmers are destroying crops. It pains to see this as farmers raise their crops like their children," Chaduni said.

"Those farmer brothers who are doing this, I want to tell them that the government is not going to accept their demands by such measures. Ten to 15 farmers have already committed suicide, when this did not move the government, will they agree to the demands if crops are destroyed," Chaduni said in a video message.

Talking to reporters in Bhiwani, Agriculture Minister J P Dalal said, "I don't think it is appropriate. There can be other ways of protest."

Farmers in a couple of districts started to destroy their wheat crop close on the heels of BKU leader Rakesh Tikait making an appeal to them at a "kisan mahapanchayat" held in Hisar district where he asked them to be ready to sacrifice their standing crop if their demands are not met by the Centre.

Asserting that they won't return home till the farm laws are repealed, Tikait had last week said farmers should be ready to sacrifice their standing crop for it.

Presuming that some farmers might have misinterpreted Tikait's appeal, Chaduni sought to clarify what he had said.

"What Tikait had said that if need arises farmers should be ready to sacrifice one crop. Where did he say that they should destroy their crop. With folded hands, I appeal that no farmer should destroy crop or commit suicide.

We are fighting, we are not leaving the agitation. We will continue this agitation till the time the government does not accept our demands," said Chaduni.