In a sting operation conducted by a news channel on two of the three lawyers wanted for alleged assault on journalists, students and teachers of Jawaharlal Nehru University at a court here last week, the perpetrators purportedly claimed that they planned to thrash JNU Students' Union president Kanhaiya Kumar in prison too.

In the video broadcast on the English news channel on Monday evening, the lawyers can be seen claiming that they also thrashed Kanhaiya for around three hours while he was in the police custody and said he wet his pants during the beating.

They can be seen claiming to have spared Kanhaiya only after they made him raise a specific slogan praising India.

One of them can even be seen claiming that he would not sign a bail bond only to land in jail so that he could beat up Kanhaiya again inside the jail premises. He went on to say that they had full support of police during the scuffle at the court premises.

Senior police officials have so far refused to comment on the video without verification.

The police had issued notices to lawyers Vikram Singh Chauhan, Yashpal Singh and Om Sharma to join investigation, following which Om Sharma presented himself before the police and was arrested. But the two others are yet to appear. 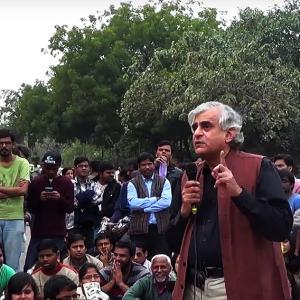