Given Prime Minister Modi’s emphasis on “sharp(ening) coordination” rather than “joint command”, analysts are guessing that a four-star permanent chairman of the chiefs of staff committee is likely, with the title of CDS, if not the functions and five-star rank, reports Ajai Shukla. 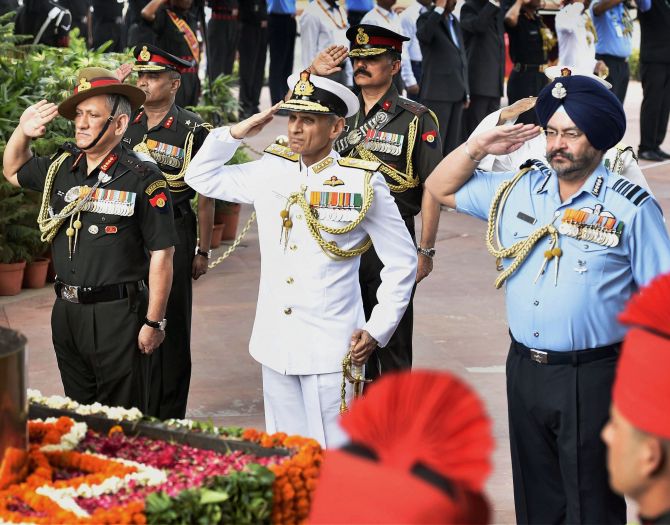 In 1999, the Kargil Review Committee recommended creating a Chief of Defence Staff -- a supreme military commander of the army, navy and air force -- who would also serve as the government’s single point of military advice.

For the two decades since, successive governments shrank from appointing a CDS, citing the need for a political consensus.

In 2001, a group of ministers endorsed the KRC recommendations, but the only joint command structure that emerged was a relatively toothless Integrated Defence Staff, headed by a three-star rank officer, junior to the three service chiefs.

Consequently, the army, the navy and the air force continue to function without essential coordination.

In his Independence Day address, Prime Minister Narendra Modi apparently abandoned the need for political consensus and announced the government was going ahead with appointing a CDS.

“To further sharpen coordination between the services, I want to announce a major decision. India will have a Chief of Defence Staff. This is going to make the forces even more effective,” said Modi.

However, it remains unclear what kind of CDS the PM will implement.

One possibility is what the GoM recommended: A five-star general who would be boss of the four-star chiefs of the army, the navy and the air force and would direct all their functions including operations, training and long-range planning.

The other kind of CDS is what the Naresh Chandra Task Force recommended in 2012 -- a less powerful, four-star officer termed the permanent chairman of the chiefs of staff committee (PCCSC), who would not directly command the three services, but would be the “first amongst equals”.

The PCCSC would coordinate between the three services, enabling efficiency through sharing resources such as training facilities and obtaining economy of scale by carrying out joint procurement of weapons and equipment.

Given Modi’s emphasis on “sharp(ening) coordination” rather than “joint command”, analysts are guessing that a four-star PCCSC is likely, with the title of CDS, if not the functions and five-star rank.

The appointment of a PCCSC would bring limited benefits, since the army, the navy and the air force would continue operating individually in key functions such as combat operations and planning.

Nor would a PCCSC enable the next layer of defence reform, which is the creation of joint theatre commands, in which a theatre chief (who could be from any of the three services) would have under his command all the army, navy and air force troops necessary for carrying out his operational tasks.

Currently, only one such tri-service command exists -- the Andaman and Nicobar Command, which functions under the IDS.

Meanwhile, each of the three services has three-to-seven single service commands with overlapping jurisdictions.

Resistance to creating a five-star CDS post has stemmed from three directions.

Politicians have had an unstated aversion to the concentration of all military power in a single person’s hands.

Bureaucrats have opposed a CDS since the four-star service chiefs already have the same status as the cabinet secretary and a five-star CDS would presumably outrank the senior-most bureaucrat.

Finally, there has been apprehension among smaller services, notably the air force, that an army CDS might undermine their positions.

The senior defence community, whose views are conveyed by veterans, approves of the CDS announcement.

Lieutenant General Satish Dua (Retired), a former IDS chief, says, “The appointment of the CDS will be a game-changer, a force multiplier, who will bring synergy and coordination to the three services.”

It is unclear who will be the first CDS, or when the appointment will be formally notified and implemented.

If the CDS is selected from the serving chiefs, Air Chief Marshal B S Dhanoa is currently senior-most.

Dhanoa retires on September 30 and, from October 1, Army Chief General Bipin Rawat will be senior-most.

However, the CDS could well be a more junior officer, deep-selected from the pool of serving generals.

The government has twice overturned the existing command hierarchy in choosing its service chiefs.

In appointing Rawat as army chief in 2017, the government superseded two generals senior to him.

The current navy chief, Admiral Karambir Singh, too, was chosen in preference to another, more senior, admiral.

Anit Mukherjee of the Rajaratnam School of International Studies, an authority on higher defence management in India, sees little benefit in appointing a CDS if he is to be merely an upgraded IDS chief, without the army, the navy and the air force handing over responsibility for substantive functions.

“What are the precise departments, if any, which are to hived off from the three services? Who will control combat operations, and perspective planning? Lack of clarity on this would create tensions between the CDS and the three service chiefs down the line,” said Mukherjee.