Terming Left-wing extremism as the "most violent movement" in India, Home Minister P Chidambaram on Tuesday said that the burden of governance in the Naxal-hit districts must rest with the states.

"The burden of governance cannot be shifted from the state governments to the Central government....In the ultimate analysis, the responsibility of governance in the Left-wing extremism affected districts must rest with the states," he told a national workshop attended by collectors of 60-Maoist hit districts.

The Central government "does not have that much human resources" and can only provide help, he said. He said the battle in the affected districts was not for maintaining law and order but winning the "minds and hearts" of the people there.

Noting that the fight against Naxalism could not be won unless villagers were on the side of the authorities, the home minister said, "Not all villagers are on our side because of trust deficit, governance deficit and development deficit".

"We will help in every way but ultimately the state government must take ownership for what they do in the Naxal-hit districts," Chidambaram said.

The workshop was on the theme of appropriate development strategy for effective implementation of rural development schemes in Maoist-affected districts under Integrated Action Plan.

The home minister said deficits in governance and development cannot be addressed unless trust deficit is addressed.

"If villagers think that Naxals are their friends and the established government is their adversary, you cannot win the battle," Chidambaram said.

"The most formidable challenge to governance is Left wing extremism not terrorism or insurgency," he said, adding there is a need to realise its nature and have clarity on the purpose of this movement before any gains could be made in fighting it.
Source: PTI© Copyright 2022 PTI. All rights reserved. Republication or redistribution of PTI content, including by framing or similar means, is expressly prohibited without the prior written consent.
Related News: Chidambaram, India, HM, Kashmir, Jammu
Print this article
'Chidambaram must visit Naxal-hit Chhattisgarh'
'Chidambaram should meet locals from Naxal areas'
Naxals kill 3 Indians daily: Chidambaram 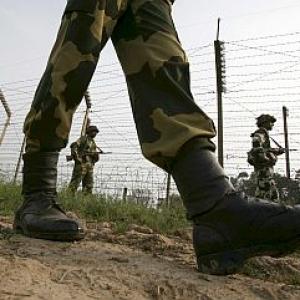 The faultlines in Chidambaram's anti-Naxal strategy