After the recent terrorist attacks in Kashmir earlier this week, Peoples Democratic Party president Mehbooba Mufti on Saturday urged the Centre to start a dialogue with Pakistan to stop the bloodshed so as to ensure peace in the Union Territory. 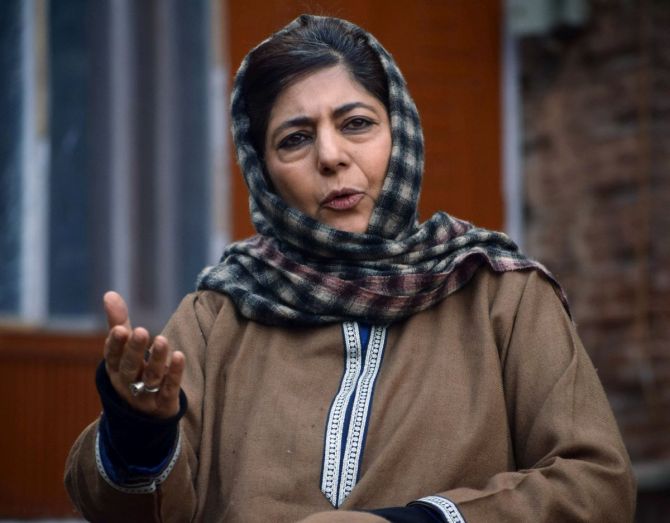 Talking to reporters on Saturday, Mufti urged the Central government to hold talks with Pakistan and the people of Jammu and Kashmir, saying the government must find ways to resolve the issues afflicting the Union Territory to curb violence.

"Till when will people of J-K, Police and jawans be sacrificed. The BJP says repeatedly that Pakistan sponsors violence here (Jammu and Kashmir) then they (Centre) should start the dialogue process -- be it here or with Pakistan," Mufti told reporters.

The BJP government should think and start the process of dialogue so that the bloodshed is stopped, the PDP president added.

Expressing concern over the terrorist activities in the J-K she said, "The government of India must deliberate, for how long the police personnel will be sacrificed in such a manner. This is a big issue which must be resolved for the sake of the people of Jammu and Kashmir."

Mufti made these statements when she met the family members of the Police constable Suhail Ahmad who was killed in Friday's terrorist attack.

"Now look at this young person. He has (left behind) two small children. His father was also killed when he was just four years old. What will they do?" she said.

On February 19, two policemen were killed in a terrorist attack in Srinagar's Baghat area of Barzulla.

In another encounter on the same day, three terror associates were also killed in the Budgam area of the Shopian district of Jammu and Kashmir.

One police personnel of Jammu and Kashmir lost his life and another was injured in a separate encounter that broke out between the security forces and terrorists in Budgam district on February 19.