Ahead of the Rajasthan Assembly session, Chief Minister Ashok Gehlot on Sunday appealed to all MLAs to listen to the voice of people to save democracy and stand with the truth in the interest of people of the state. 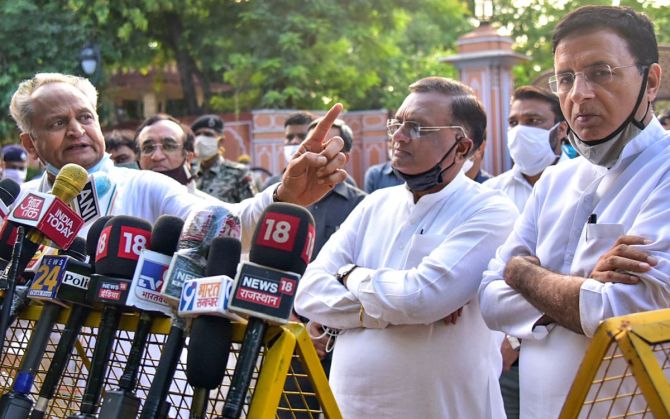 The assembly session in the state, which has been witnessing politicial turmoil after the rebellion by Sachin Pilot and legislators loyal to him, will start on August 14. Gehlot is likely to seek a trust vote during the session

In a letter to all MLAs, Gehlot sought their cooperation in fulfilling the promises of development and prosperity of the state.

"It is my appeal that you should listen to the voice of people in order to avoid wrong tradition, to maintain people's trust in us and to save democracy," Gehlot said in the letter.

Pilot was sacked as deputy chief minister and the president of the state unit of the Congress after he and some MLAs loyal to him rebelled against Gehlot. Many believe that Gehlot still has an edge in the numbers game and is confident of a majority.

"You may be a legislator from any political party, you should ensure and take a decision after understanding voter's feeling that how a people's elected government continues to work strongly for state's welfare,", he said, emphasising that efforts to destabilise government are not succesful.

The chief minister expressed faith that legislators will act in the larger interest of people of the state and will cooperate in fulfilling the promises of development and prosperity.

Ahead of the session, half a dozen Bharatiya Janata Party MLAs from Rajasthan have shifted to Porbandar in Gujarat.

BJP MLA Nirmal Kumawat had alleged that the Congress government in Rajasthan was "harassing" opposition MLAs, and said they were on a pilgrimage to Somnath to seek mental peace.

Congress MLAs are currently holed up in a Jaisalmer hotel as the party has accused the BJP of horse-trading following the revolt by Pilot and 18 MLAs loyal to him.