Eighty-two-year-old Father Stan Swamy, arrested in the Elgar Parishad-alleged Maoist links case, has filed an application before a special court in Mumbai, seeking that he be allowed to use a straw and sipper in Taloja jail in Navi Mumbai, where he is currently lodged. 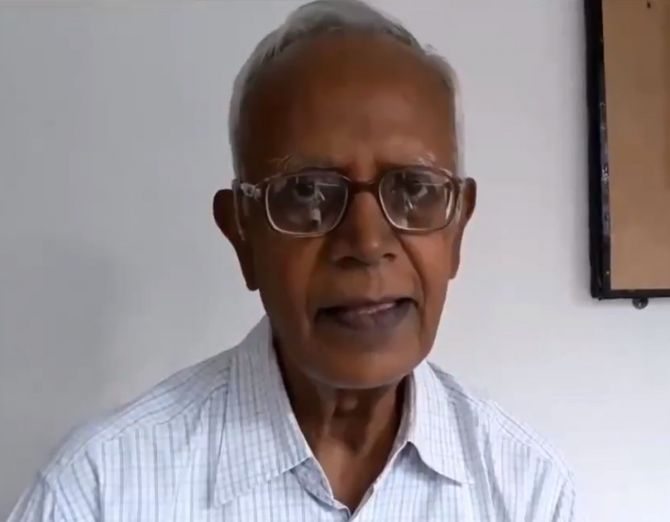 Swamy was arrested from his home in Ranchi last month in connection with the violence in Bhima Koregaon near Pune in January 2018.

The accused, through his lawyer Kritika Agarwal, moved the plea before the special National Investigation Agency court on Friday seeking straw and sipper in jail citing health issues.

The special court judge D E Kothalikar has asked the national probe agency to file its reply on the matter on November 26.

NIA officials have said that investigations established that Swamy was actively involved in the activities of the Communist Party of India-Maoist.

It also alleged that Swamy had received funds through an associate for furthering the agenda.

Besides, he is convenor of the Persecuted Prisoners Solidarity Committee. a frontal organisation of the CPI-Maoist, the NIA officials have claimed.

They said that literature, propaganda material of the CPI-Maoist and documents related to communications for furthering the group's programmes were seized from his possession.

Last month, the NIA had filed a chargesheet in the matter against eight people, including Swamy.

As many as 16 people have been arrested in connection with the case so far under various sections of the Indian Penal Code and the anti-terror law UAPA.

The probe into the Elgar Parishad case was taken over by the NIA on January 24 this year.

The Pune police have claimed that speeches delivered at the Elgar Parishad conclave, held on December 31, 2017 at Shaniwarwada in Pune city, led to the violence at Koregaon Bhima the next day.

The police have claimed the conclave was organised by people having Maoist links.