Stampede breaks out at naval recruitment exam in Mumbai 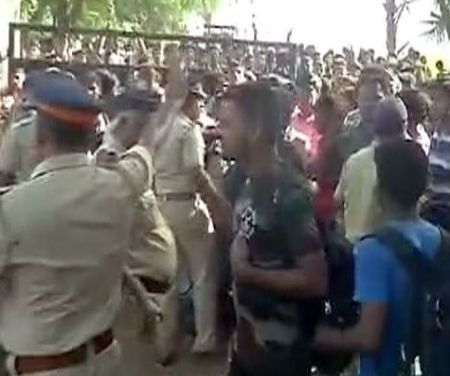 Many people are feared injured in a stampede at a naval base in Mumbai’s Malad, where thousands of candidates had gathered for a recruitment drive on Friday morning.

According to reports, things spiralled out of control after more than 6,000 candidates gathered at INS Hamla. The expected crowd was to be around 4,000. As the crowd swelled, people tried to push their way through the gate.

There are at least four casualties, but the nature of injuries are unknown. The casualties have been taken to naval hospital inside INS Hamla.

The Indian Navy spokesperson said there was a recruitment rally at INS Hamla Malad on Friday morning for Senior Secondary Recruits. “We were expecting a good response from volunteers. However the response was overwhelming and crowd control created a bit of confusion (in the early hours) which was subsequently handled very efficiently by the local police and Navy officials. The recruitment drive is going on smoothly now.”