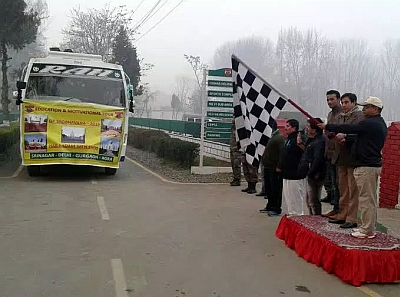 Ignoring the warning of women's outfit Dukhtaran-e-Millat, a group of 30 girl students from various schools in Srinagar have embarked on an Army-sponsored educational tour.

"Towards its commitment for better education of youth in general and women empowerment in particular, the Army on Saturday embarked on an educational tour for 30 girl students of various Higher Secondary Schools of Srinagar," a Defence spokesperson said on Sunday.

The tour of the girl students comes five days after DeM chief Asiya Andrabi warning the parents to desist from sending their girls on such tours.

"It is shameful and deplorable on part of those parents who have consented and enrolled class 11th and 12th daughters for the Army tour. I am not appealing to these parents but warning them to desist from such activities," Andrabi said in a statement last week.

The 10-day tour to Delhi and Agra, which will introduce the children to diverse cultural, socio-economic and historical dimensions of the country, was flagged off from Badami Bagh Cantonment by Major General Mukesh Kumar, 31 Sub Area Commander yesterday, the defence spokesperson said.

"The children are accompanied by two lady teachers from school faculty besides Army persons and some of their spouses," he said.

He said the tour participants will also meet and interact with several Army and civil dignitaries apart from planned interactions with the students from various colleges.

"This will help them in a purposeful exchange of ideas".

The spokesman said the parents, guardians, Principals and teachers, who were present at the flagging off ceremony, lauded the efforts of Army in conducting such career educative and oriented tours for the brighter future of the students, he added.