The TDP members in the Upper House refused to leave the chamber even after the House was adjourned for the day. 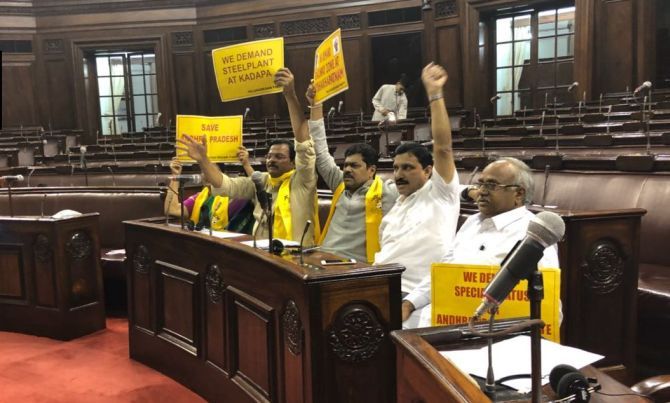 IMAGE: TDP MPs in Rajya Sabha protest even after it was adjourned for the day on Thursday. Photograph: ANI

High drama was witnessed in the Central Hall of Parliament as well as Rajya Sabha when Telugu Desam Party MPs protested at the two places demanding special category status for Andhra Pradesh.

The TDP members in the Upper House refused to leave the chamber even after the House was adjourned for the day around 2.30 pm.

In solidarity, Lok Sabha members from the party staged a similar protest in the historic Central Hall.

Those protesting inside the Rajya Sabha chamber were marshalled out around 8.15 pm.

The TDP members, who had been demanding special category status for AP since the beginning of the part II of the Budget session since March 5, escalated their protest on Thursday.

Speaking to reporters, the party lawmaker C M Ramesh said, "After the RS was adjourned, we remained inside peacefully demanding rights of AP. But marshals pulled us out of the out in a rude way and injured us. We never expected it. It is an insult to people of AP. They are showing their muscle power. We will take this seriously and begin our agitations from tomorrow."

The MPs also said that they explained the reason behind their protest to Rajya Sabha Deputy Chairman P J Kurien. 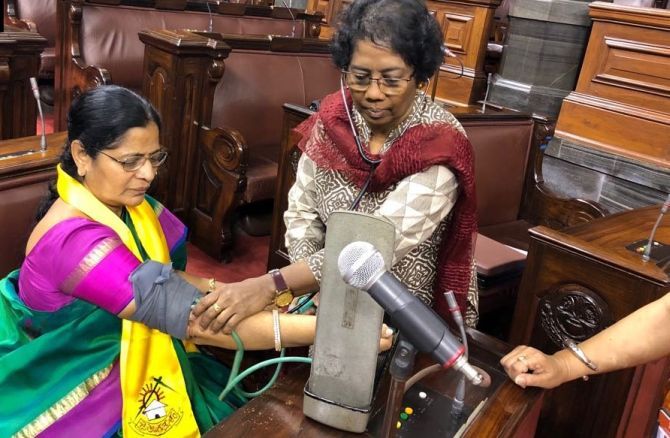 The party last month walked out of the National Democratic Alliance.

5 YSRC MPs say they will resign from Lok Sabha

Meanwhile, five MPs of the Yuvajana Shramika Rythu Congress Party on Thursday announced that they will resign from the Lok Sabha on Friday to protest the 'failure' of the NDA government to grant special category status to AP.

Addressing a press conference, the MPs also said they are outraged as their notices for no confidence motion against the NDA government could not be taken up for discussion in the House due to continuous disruptions.

The YSR Congress MPs had given notices for no confidence motion against the government for its failure to grant special category status to Andhra Pradesh.

The MPs said they would be submitting their resignation letters to Lok Sabha Speaker Sumitra Mahajan on Friday, the last day of the Budget session.

"Resignation letters will be submitted in proper format. There is enough time to conduct by-elections.... We would fight the polls and again continue our demand for special category status," party MP Varaprasad Rao Velagapalli said.

He also accused Prime Minister Narendra Modi and Andhra Pradesh Chief Minister Chandrababu Naidu of 'disrespecting democracy', saying both the leaders 'failed' to keep their promises to the people of Andhra Pradesh.

"YSRCP has given notices for no-confidence motion 12 times and not even once it was taken up for discussion," Velagapalli said.

YSRCP chief Jaganmohan Reddy had announced in February that the party's five MPs would resign if its demand for Special Category Status to Andhra Pradesh was not fulfilled by the Centre.

The YSRCP and the TDP had given notices for no-confidence motion in the Lok Sabha.

Following this, TDP supremo and Andhra Pradesh Chief Minister Naidu had met parliamentary party leaders of various parties in an attempt to garner support for the no-confidence motion.

"Naidu began fighting for special category status out of sheer pressure from the people as our leader has been ramping up pressure on him on the issue. He had no option but to quit the NDA," another YSRCP MP Mekapati Raja Mohan Reddy said.

On Naidu's claims of nexus between the YSRCP and the BJP, he said, "Naidu is trying to club our party with the BJP. This is unfair. The TDP was in alliance with the BJP for four years and now they are blaming us."