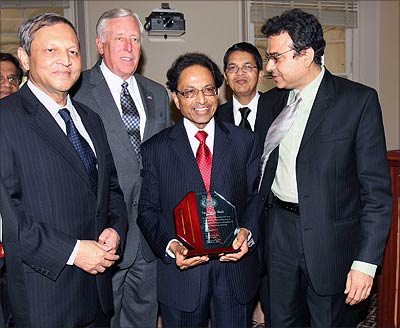 More than 40 members of the top leadership of the American Association of Physicians of Indian Origin, led by president Dr Hemant Patel and the heads of key committees, descended on Capitol Hill last month to interact with US lawmakers.

During an all-day legislative conference and a dinner that AAPI hosted on the Hill for influential lawmakers like House Majority Leader Steny Hoyer (Maryland Democrat), Dr Patel and his team comprising the likes of president-elect Dr Sanku S Rao, vice president Dr Vinod 'Vinny' Shah, secretary Dr Ajeet Singhvi, treasurer Dr Prasad Srinivasan, and chair of the board of trustees as also past presidents Dr Navin Shah and Dr Suvas Desai,  raised concerns over Medicare reimbursements, the lack of any progress on health care reform and the issue of J-1 visas for Indian physicians desirous of coming over to the US to practice in underserved rural and indigent inner-city areas.

Dr Patel, in his presentation to the lawmakers, said that according to projections from the American Medical Association, 45 percent of physicians would decrease or stop accepting Medicare patients if the annual decrease in reimbursements were to take effect. He pointed out that Medicare reimbursements have remained the same from 2001 to 2008, and will decrease by 5 to 10 percent annually in the near future.

The AAPI chief called on lawmakers to introduce legislation to protect physicians' reimbursements, and warned that if these decrease in payments continues unabated, it would make the practice of a large number of doctors untenable, forcing them to give up their practice, particularly since the malpractice premiums have increased exponentially.

He noted that in just the last two years, malpractice premiums had increased by 15 percent, and said this would inevitably lead to 'defensive medicine and jackpot justice, where the total costs of healthcare are inflated by unnecessary tests.'

'Highly litigious fields such as obstetrics and gynaecology, surgery and emergency medicine are experiencing a relative dearth in physicians nationwide due to such high cost premiums,' Dr Patel said, adding that AAPI would support any legislation that imposes effective caps on malpractice claims.

He also pitched strongly for a more simplified and expanded J-1 programme that would enable the import of talented physicians from India to serve in the heartland of America, which is experiencing a dearth of primary care doctors. He cited a recent study conducted by the Council of Graduate Medical Education, which found there would be a shortage of 85,000 physicians in the US by the year 2020.

The AAPI president pointed out that from 1980 to 2005, medical school enrolment had remained stagnant while the American population had increased by more than 70 million. Compounding the issue of health care providers in rural America, not to mention in urban metropolitan cities, approximately 250,000 active physicians were expected to retire by 2020.

Dr Patel argued that the situation called for a collaborative effort between the Congress and the medical establishment to increase the size of medical schools in the US and the number of residency positions to also include foreign physicians.

In an extensive presentation on the problems facing health care professionals, Dr Patel pointed out that the average medical student debt in 2007 stood at $140,000, and due to poor stipends during their internship and residency years, they were unable to clear their loans. Unless such problems were solved through legislation, Patel said, the younger generation would not be inclined to take up the practice of medicine.

Estimates indicate that Indian Americans constitute the largest number of medical students in the country, between 10 to 12 per cent of the total, replacing traditional Jewish American hegemony. Jewish American students, discouraged by the nearly seven years it takes to complete a medical education and residency, and the long hours of duty during the internship and residency years, have increasingly opted for law.

Dr Patel further pointed out that international medical graduates will comprise 21 percent of incoming residents beginning July 2008, and although they constitute about one-fifth of the entering classes, they outnumber US medical graduates by three to one in rural and underserved areas.

He pointed out that existing tight controls on J-1 and H-1 visas for international graduates, and programmes like Conrad 30 (named after the author of the legislation Senator Kent Conrad), have ensured limited seats for such graduate students. He advocated legislation that will allow for faster processing of visas for IMGs, and an increase in the number of visas for medical training tied to the codicil that IMGs would after completing their training remain in the country to serve the healthcare needs of people in underserved rural areas and inner-cities.

While lawmakers conceded that the points were well taken, they were not optimistic that the required legislation would emerge from the Congress in the near future. The likes of Congressmen Frank Pallone (New Jersey Democrat) Dr Jim McDermott (Washington Democrat) and Joe Crowley (New York Democrat), all known friends of AAPI, said no health care reform legislation was likely in the next few months, nor would any bills to expand the J-1 or residency programs come through with Congress in election mode.

The lawmakers said AAPI would need to wait for a new administration and Congress, next year, before the conditions would be conducive to renewing the debate on health care reform.

The lawmakers, interestingly, acknowledged that health care in the country was broken, and needed urgent fixing. Dr McDermott spoke at length of the efficacy of the French health care system and pointed at a recent ABC News report that rated the French system, which offers all citizens universal health care at half the cost Americans pay, as the best in the world by the World Health Organisation.

While not advocating that the French system be cloned in the US, Dr McDermott argued that the US does not have a universal health care system in place "because special interests have used their influence to put profits ahead of people, and whenever someone tries to change it, they spend money to scare people."

The lawmaker, who is a physician by training and has traveled over 22 times to India, called on AAPI to spearhead the move for reform, once the new administration is in place in January. However, such a system in unlikely and is sure to be killed by the conservative Republicans in Congress who are loath to any government bureaucracy being given charge of the country's health care system.

Interestingly, Crowley segued into the topic of the US-India civilian nuclear cooperation agreement, and noting that AAPI had under the umbrella of the US-India Friendship Council lobbied Congress to approve the enabling legislation to facilitate the deal, said domestic politics in India had all but killed the deal.

He hoped that India would act soon, because if the deal was not consummated during the lifetime of the current administration, it was likely that the next President, and a new Congress, would renegotiate the deal on considerably tougher terms.

India's Ambassador to the US Ronen Sen, who keynoted the dinner, thanked AAPI for its health care initiatives and service to the needs of rural poor, particularly in India.

Ann Schaffer, director of the Arthur & Rochelle Belfer Center for American Pluralism at the American Jewish Committee, disclosed that AJC will take an AAPI delegation to Israel shortly, to foster long-term collaboration and cooperation in health care delivery. She said Israel's expertise and technological advancement in the areas of emergency medicine and trauma care could be a model for implementation by AAPI in India, and lauded Dr Patel for his leadership for initiating contacts with the AJC.

"As American Jews and Indian Americans, we have so much in common and the growing relationship between three democracies  India, America and Israel  is strengthened by our efforts to build bonds here at home," Schaffer said.

At the dinner, Dr Navin Shah, who earlier this year received the India Abroad Award for Community Service, was presented with a special legislative award for his activism decades ago on behalf of IMGs, while other former presidents and AAPI luminaries were honoured for their varied services.

Copies of the book Fight for Equality, that Dr Shah conceived and funded and which chronicles the early battles for equitable conditions for IMGs, were distributed to all participants and lawmakers. The book highlights the immigrant doctors' fight for equal treatment in the shadow of the nation's health care titans  the AMA, the Association of American Medical Colleges, the American Hospital Association, the US Department of Health and Human Services, and Congress itself (India Abroad, October 12, 2007).