IMAGE: A senior police officer lays a wreath on the coffins of policemen who were killed in an IED blast in north Kashmir’s Sopore on Saturday. Photograph: PTI Photo

Four policemen on patrol duty were killed on Saturday in an improvised explosive device blast by terrorists in a market in Sopore township, the first IED attack in Kashmir since 2015.

The four personnel belonging to Indian Reserve Police-3rd battalion were on law and order duty in the township in north Kashmir, 50 km from Srinagar, when the IED planted by terrorists in the market, which was shut due to a separatist sponsored strike, went off, police said.

Terror outfit Jaish-e-Mohammad has taken responsibility for the attack, but the Kashmir police said it will have to verify the claim. 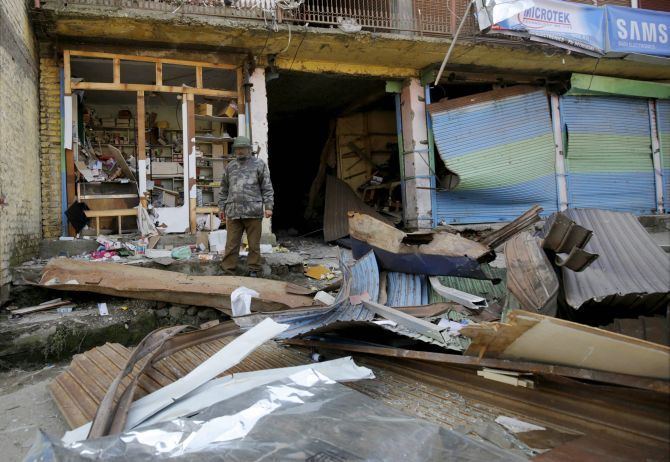 Additional Director General of Police (ADGP) Munir Khan said the use of IEDs by terrorists had ended since 2015 and the security forces will have to chalk out a new strategy in the wake of the blast. IMAGE: Wife of Constable Ghulam Nabi mourns during his funeral procession, at Rohama in Rafiaabad on Saturday. Photograph: PTI Photo

Denouncing the killings, Jammu and Kashmir Chief Minister Mehbooba Mufti urged the people to work shoulder to shoulder to break the 'vortex of violence' in the state.

These young policemen were killed when they were on duty to protect the people in the town. It is highly unfortunate, Mufti said.

J-K Congress chief G A Mir condemned the killing and claimed the incident had exposed the 'tall claims' of the Mehbooba government about the Kashmir situation being normal. IMAGE: Security personnel cordon off the area after the blast. Photograph: Umar Ganie/Rediff.com

Giving details of the incident, ADGP Munir Khan told reporters that shops were closed and vehicles were off roads due to the strike in Sopore when the militants ambushed the police team.

"Our normal law and order deployment reached the lane between 'Chotta Bazaar' and 'Bada Bazaar'. There was an IED blast in which four of our boys were martyred," said Khan, who was recently promoted as additional director general of police, but continues to hold the post of inspector general of police (IGP) Kashmir.

"The IED was placed beneath the entrance of a shop. It was a big IED, there has been a huge crater because of it. Six or seven shops have suffered damage as well," he said, adding, "It was the first (IED) blast since 2015. Its use had almost ended." He said the security forces will have to think about it.

"We will put our heads together and chalk out some new strategies to tackle this thing,” he said.

The JeM, in a statement to a local news agency here, claimed responsibility for the attack. 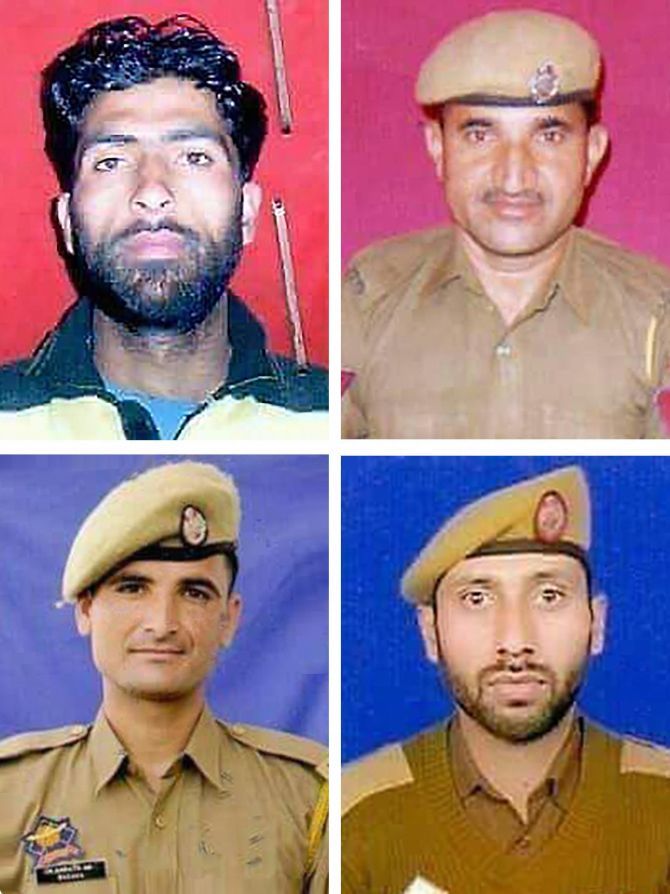 A wreath laying ceremony was held at District Police Lines Sopore to pay homage to the slain personnel.

Khan led police officers and jawans in paying floral tributes to the martyrs, a police spokesman said in Srinagar.