Senior Congress leader and candidate for the party's presidential polls Mallikarjun Kharge on Friday said there is no such thing as "remote control" in his party unlike the Bharatiya Janata Party, where every president is selected through a "consensus". 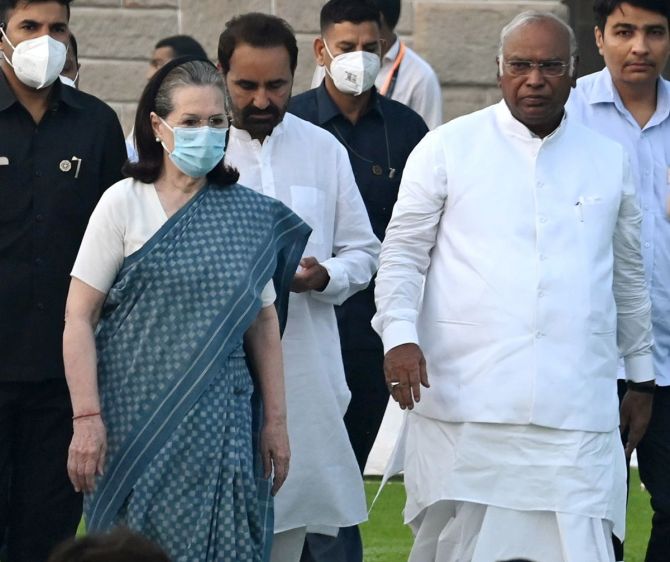 In Ahmedabad to campaign for the election to the party's top post, Kharge asserted that if becomes the head of the grand old party, the remote control would be with him.

He was replying to a query about the BJP's claim that he would act as the "remote control" and "proxy" of Sonia Gandhi after being elected to the post.

"A lot of people say I am a remote control and work from behind. They say I will do what Sonia Gandhi will say. There is no such thing as remote control in Congress, people take decisions together. It is your thinking. A few people are creating this idea," Kharge said.

Attacking the BJP, he said, "How many times has the prime minister held (party president's) election? All the presidents were selected through consensus, and you are teaching me? Where is the remote control in the BJP? When I become president, the remote control will stay with me."

Decisions would be taken by "our committee, elected members, working committee and parliamentary board", he said, adding that he would try his best to ensure 50 per cent of organisational posts are reserved for those below 50 years of age.

Hailing Sonia Gandhi, Kharge said she had made a renowned economist the country's prime minister (Manmohan Singh) rather than taking up the post herself or considering her son for it.

She hails from a family that has sacrificed its members for this nation and has even spoken of pardoning the killers of her husband, Kharge said.

He said if he becomes the party president, he would try to give representation to women, youth, Dalits, backward classes at every level of the party, and also appeal to state units to fight polls unitedly.

Asked about his competitor Shashi Tharoor, the veteran Karnataka leader said he was contesting the polls after colleagues and workers asked him to do so.

"When our workers, delegates and youth say you have to take leadership, then should I run away?" he asked.

He said the Congress faces many challenges, but has the capacity to face and overcome them bravely.

Kharge also recalled that after the flash floods in Kedarnath, Narendra Modi, who was then the chief minister of Gujarat, had called him seeking a special train to bring back the people from his state stuck in the Uttarakhand town.

"At that time, we had tried our best to help them and send them home at the government level. If we work together, then the country will progress," he asserted.