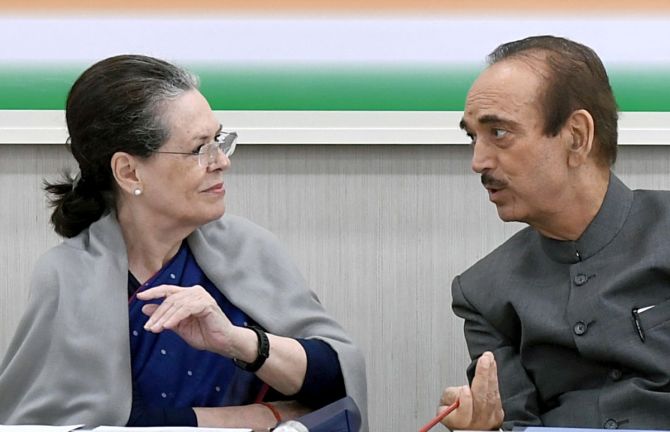 Gandhi also formed a six-member special committee to assist her in organisational matters, apart from reconstituting the central election authority of AICC with Madhusudan Mistry as its chairman, Rajesh Misra, Krishna Byre Gowda, S Jothimani and Arvinder Singh Lovely as its members.

The CEA will elect the new Congress president.

While Chowdhury has been made a permanent invitee of CWC, the other three have been dropped.

The special committee, which will assist Gandhi in organisational and operational matters, will have AK Antony, Ahmed Patel, Ambika Soni, KC Venugopal, Mukul Wasnik and Randeep Surjewala as its members.

The organisational changes bears the stamp of Rahul Gandhi, with majority of the new appointees known to be his close aides, including general secretaries Surjewala, Ajay Maken, Jitendra Singh and KC Venugopal.

Some of the young leaders considered close to him have been given key organisational roles as incharge of various states and figure in the reconstituted CWC as permanent and special invitees.

Surjewala has also been made the general secretary incharge for Congress affairs in Karnataka. He currently also holds the charge of the AICC communications department.

Among the leaders who have been made permanent invitees to the CWC include Digvijaya Singh, Jairam Ramesh, Salman Khurshid, Avinash Pande and Chowdhury, who was earlier a regular member of CWC.

From the 'group of 23' leaders, who had written a letter to Gandhi seeking Congress' overhaul, Azad and Sharma continue to be regular members of the CWC, while Jitin Prasada has been made a permanent invitee to CWC from being a special invitee earlier.

Prasada has also been made incharge of party affairs in West Bengal and Andaman and Nicobar Islands.

Wasnik, another leader who was among the 'letter-writers', has been made AICC general secretary incharge for Madhya Pradesh.

Lovely, also from the 'group of 23' has been accommodated as a member of the CEA.

Anugrah Narayan Singh, Asha Kumari, Gaurav Gogoi and Ram Chandra Khuntia are among those dropped by the Congress as its incharge for states.

The new AICC general secretaries include Harish Rawat for Punjab, Oomen Chandy for Andhra Pradesh, Tariq Anwar for Kerala and Lakshadweep, Jitendra Singh for Assam, Maken for Rajasthan and KC Vengopal for Organisation.

While Bansal has been made incharge of AICC administration, those who will look after state affairs include Rajni Patil (Jammu and Kashmir), PL Punia (Chhattisgarh), RPN Singh (Jharkhand), Shaktisinh Gohil (Delhi and Bihar), Rajeev Shankarrao Satav (Gujarat, Dadra and Nagar Haveli, Daman and Diu) and Rajeev Shukla (Himachal Pradesh).