'If we have to join the government we will have to first decide upon the CMP.'
'Nothing can be decided without having a CMP first.'
Prasanna D Zore/Rediff.com 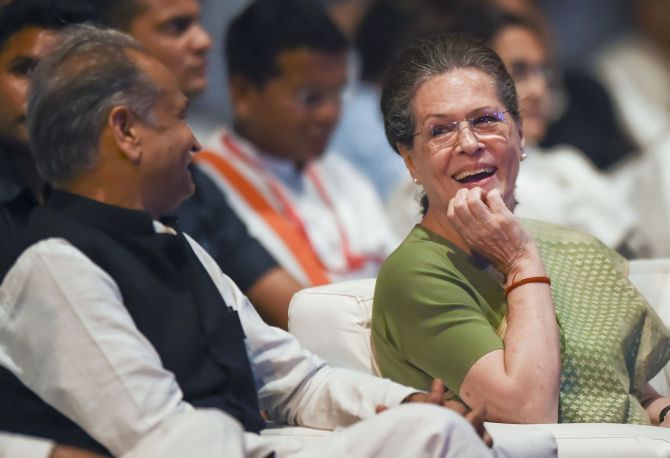 The Shiv Sena in Maharashtra can heave a collective sigh of relief.

Two senior Congress leaders from Maharashtra who have actively been associated in the confabulations to decide whether the Congress should be part of the next state government or support it from the outside have categorically stated that party President Sonia Gandhi has given the go-ahead for the formation of a Shiv Sena-Nationalist Congress Party government in the state.

These leaders said the decision whether the Congress should be part of this government or support such a dispensation from the outside is being discussed threadbare by the central leadership in consultation with the state leadership and elected Congress MLAs, and a view is likely to emerge after meeting of the senior party leaders in Delhi scheduled for 4 pm today.

The Congress's Vijay Wadettiwar, former leader of the Opposition in the Maharashtra assembly and incumbent MLA, said Sonia Gandhi gave the go-ahead for her party coming together with its ideological opponent of 50 years the Shiv Sena during the meeting held at her home on Monday.

"She gave the go-ahead to sit together with the NCP and prepare a common minimum programme. What does that mean?" Wadettiwar said in response to a question if the Congress and Shiv Sena could ever come together.

Former state Congress president Manikrao Thakre, who is also actively involved in the discussions with the central leadership and state Congress MLAs in Jaipur, said Sonia Gandhi called NCP President Sharad Pawar at around 6 pm on Monday and discussed the formulation of a CMP along with state Congress leaders.

"The CWC meeting couldn't reach a conclusion and it was decided that discussions should be held with the state leaders and party MLAs currently in Jaipur. After that discussion Soniaji called Pawar around 6 pm and talked about a common minimum programme that should be acceptable to all the three parties and then go ahead with other formalities. The CMP would be first chalked out by the NCP-Congress and then sent to the Shiv Sena for its nod," Thakre said.

Thakre and Wadettiwar said even though Monday's CWC meeting was inconclusive, the meeting at 4 pm at the Congress president's residence helped bring about a closure.

"The Congress and NCP would soon sit together and chalk out a CMP in the next two days. The go-ahead has been given for deciding upon the next steps to be taken (in the formation of the government)," said Wadettiwar. Admitting for the first time that the Congress won't be averse to sharing power and responsibility along with the Shiv Sena and talking about the delay for the go-ahead from Gandhi, Wadettiwar said, "(Discussions around what the) common minimum programme (should be) took some time. It will be ready within two days."

"If we have to join the government we will have to first decide upon the CMP. But nothing can be decided without having a CMP first," he added.

Thakre too revealed that the Congress would be open to joining the government but only after the stamp of agreement on the CMP from all the three parties.

Asked about the opposition from senior Congress leaders A K Antony and K C Venugopal to joining hands with the Sena, Thakre said, "A democratic party has diverse views and we discuss it together, but the final word comes from the party high command."

Wadettiwar said the letters of support from Congress MLAs is ready and will be submitted to Maharashtra Governor Bhagat Singh Koshyari only after a deal is reached on the CMP. He was responding to allegations from the NCP's Ajit Pawar that it would have been improper on his party's part to submit the letters of support of NCP MLAs in their effort to form a government with the Shiv Sena without having the same from Congress.

"The question about who will be the next CM will be discussed only after all the three parties agree to the terms and conditions of the CMP. Let there be President's rule in the state for some time," Wadettiwar said.

"The next government can be formed even when President's rule is in force. Our only aim is to provide a stable government for five years."