Sonia said that the present dispensation have used every trick in the trade, but the Congress has neither succumbed before this arrogance of power nor will it succumb in future. 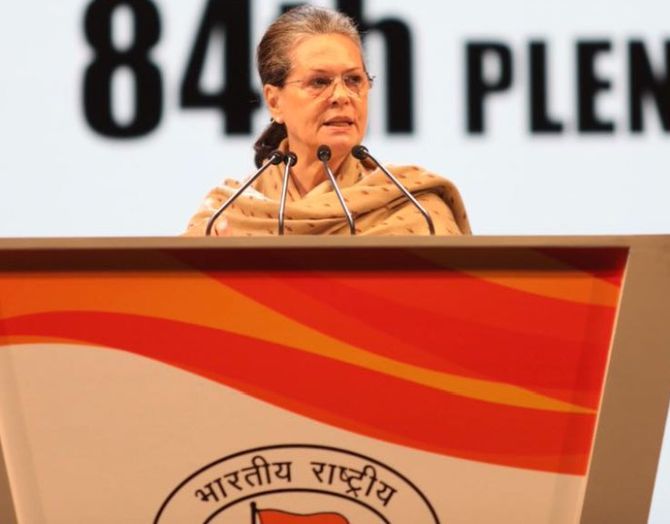 In her address at the 84th Congress Plenary Session, she accused the Modi government of using "all tricks in the trade" to wipe out the Congress and asserted that the party would never bow down.

She exhorted Congress workers to support new party chief Rahul Gandhi and be ready for any kind of sacrifice to strengthen the organisation.

Sonia also asked the workers to free the country of "discrimination, vendetta politics and arrogance".

"We are exposing Prime Minister Modi and his colleagues' false claims, frauds and corruption with proof.

"People have now understood that the 2014 promises of sab ka saath, sab ka vikas and na khaoonga, na khaane doonga and his 'Mann ki Baat' on radio are only dramebaazi (theatrics) and a trick to grab votes and electoral power," she said, referring to Modi's promises of inclusive development and corruption-free governance.

She claimed that the Congress was fighting a "tyrannical" government and the people have begun to realise that the promises made by the BJP in 2014 were hollow.

“In the last four years, this arrogant and power-drunk government has left no stone unturned to destroy the Congress. They have used every trick in the trade, but Congress has neither succumbed before this arrogance of power nor will it succumb in future,” she said.

The United Progressive Alliance chairperson said the party is waging a struggle against the Modi government's "dictatorial" ways, "disregard" for the Constitution, "denigration" of Parliament and their "divisive ideology", besides "political vendatta and conspiracies like intimidating the media".

She recalled how the Congress had changed its plan of going alone as per the 'Panchmarhi Declaration' in 1998 to aligning with like-minded parties at the Shimla Declaration in 2003 and then successfully formed governments in various states and at the Centre in 2004 and 2009.

Sonia Gandhi said the governments under Manmohan Singh formulated many schemes for the welfare of the people and the economy grew fastest during that time.

"Under the leadership of former PM Manmohan Singh, the economy of this country flourished. Our government formed policies which lifted millions of people from poverty. And today, the Modi government is weakening these policies," she said.

The Congress leader claimed that the party was "exposing the frauds of the Modi government".

The party, she said, was making efforts to win back the trust of the people and would work with like-minded parties to oust the BJP.

Reflecting on the party's recent impressive show in assembly polls in Gujarat, and bypolls in Madhya Pradesh and Rajasthan, she said that those who want to throw the very identity of the Congress out of the political arena of the country do not know how much love and affection the people have towards it.

"There is only one priority today and that is how to make Congress party stronger. The Congress is not just a political party, but an ideology," she said, adding that there is a need to bring the Congress back on centre-stage of the political and public discourse.

She called upon party workers to put aside egos and aspirations and work for strengthening the Congress.

"The time has come when each of us should see what we can do for the party," she said.

Sonia  said the aim would be to strengthen the party with which all have an age-old attachment.

"The party's win will be nation's win and the party's victory will be our victory,” she said, adding that the most important thing was to see how the Congress sets the new agenda of the country under the new leadership.

She also recalled the Chikmanglur bypoll victory of Indira Gandhi 40 years ago and asked party workers to emerge victorious like the former prime minister.

“Under the leadership of new party chief, the Congress should once again become the party that frames the basic agenda and should represent the diversity in society and should come up to the expectations and aspirations of the people,” she said.

She also urged the party workers to extend all support her son Rahul Gandhi who took over the reigns of the Congress in "such difficult times".

The Congress is seeking to ally with like-minded parties to stop the BJP from coming back to power in 2019 general elections.