Sonia Gandhi was once again elected leader of the Congress Parliamentary Party at a meeting of party MPs at the Central Hall of Parliament on Saturday and said several "decisive measures" were being mulled to strengthen the party. 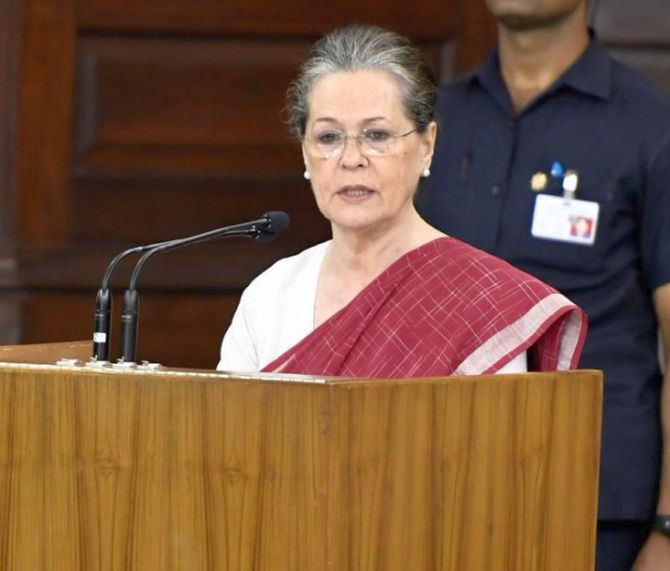 In her speech after being elected the CPP leader, she called upon party MPs not to let their guard down and urged them to play the role of an effective opposition and ensure better coordination and cooperation with like-minded parties in Rajya Sabha.

She told the members that the issues they raise in Parliament must resonate in the minds of the party workers and with the public.

She also said that the party will play a constructive role in supporting the government in reform measures but will oppose it for it "divisive and regressive actions".

Gandhi, after thanking the 12.3 crore voters who voted for the Congress in Lok Sabha elections, also lauded the role of Rahul Gandhi as Congress president for his "valiant and relentless campaign" in this poll.

The meeting was attended by the party's 52 newly elected Lok Sabha MPs and Rajya Sabha members, besides members of the Congress Working Committee and other senior leaders.

Gandhi, who represents Uttar Pradesh's Rae Bareli in Lok Sabha, is the chairperson of the Congress-led United Progressive Alliance.

Sources said the Congress Parliamentary Party authorised Gandhi to pick the party's leader in Lok Sabha. She has convened a meeting of senior leaders in the afternoon to decide on the matter. 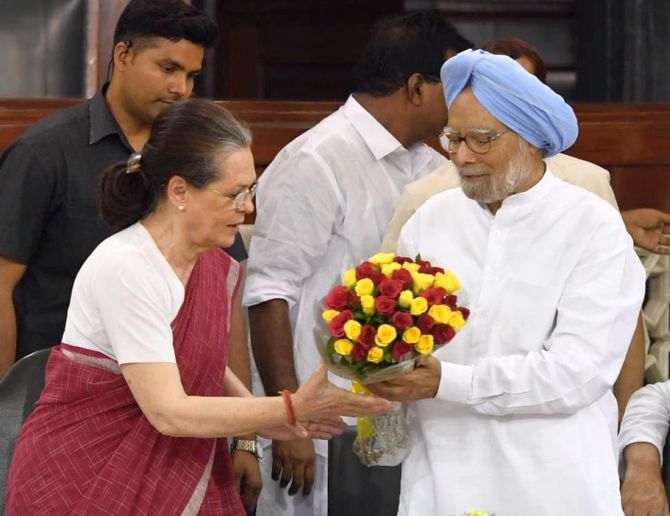 "In this time of crisis, we must acknowledge the numerous challenges confronting the Congress party. The Congress Working Committee met a few days ago to deliberate the next steps and the way forward for us. Several decisive measures to strengthen the party are being discussed," she told the MPs and leaders, while hinting at changes in the party that are in the offing.

Congress president Rahul Gandhi is pushing for his resignation even though the party's highest decision making body has rejected it and urged him to undertake changes in the party.

The sources say that the party is discussing several proposals, including installing a non-Gandhi as the party chief and a body of senior leaders that acts as a guiding force to the new president.

She said even though the party had 44 MPs in last Lok Sabha and about 55 in Rajya Sabha, under Rahulji's leadership the Congress party has fought bravely to expose the government's misdeeds and congratulated the MPs for their hard work.

"We were in the forefront of ensuring that some of the UPA's historic Acts were not diluted. At the same time, we cooperated with the government on a series of reforms, with constructive suggestions. This time too, we will support progressive and inclusive policies but oppose the government strongly whenever they undertake divisive and regressive actions," she said.

While thanking the 12.3 crore voters, Sonia Gandhi said, "Your vote to the Congress party is a vote for safeguarding our Constitution, a vote for economic and social progress, a vote for liberty, and for social justice."

Lauding Rahul Gandhi's role as party chief, she said, "I also take this opportunity to whole-heartedly thank Rahul Ji for his valiant and relentless campaign. As Congress President, he has given his all and toiled night and day for the Congress party."

She said Rahul demonstrated his "fearless leadership" by taking the Modi government head on and highlighted the "injustices" carried out against farmers, workers, traders and small businesses, against the youth, women and the marginalised sections of society. 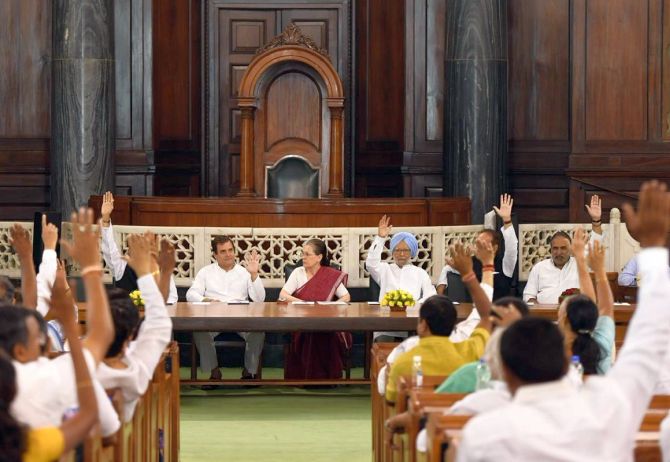 She said Rahul has rejuvenated the Congress organisation in many states, and most recently led the party to victory in Chhattisgarh, Rajasthan and Madhya Pradesh.

"As Congress President, he earned the respect and love of every worker and crores of voters across the length and breadth of our country. Even as I speak, emotional messages are coming from all corners, vindicating his leadership. We all express our gratitude to him for his sincerity of purpose, his relentless effort, his hard work and leadership," she said.

On the reducing strength of the party in Rajya Sabha, the new CPP leader said as numbers will be challenged, it is even more important to ensure better coordination and cooperation with like-minded parties.

"Congratulations to Smt Sonia Gandhi on being elected Leader of the Congress Parliamentary Party. Under her leadership, the Congress will prove to be a strong & effective opposition party, that will fight to defend the Constitution of India," the Congress president tweeted.

This was the first official meeting that Congress president Rahul Gandhi attended after the May 25 meeting of the party's working committee, where he had offered to quit as Congress chief.

The CWC has already rejected his offer to resign and unanimously passed a resolution authorising him to bring structural changes in the party at all levels in a bid to revamp it.

Photographs: @INCIndia/Twitter, ANI
Source: PTI© Copyright 2020 PTI. All rights reserved. Republication or redistribution of PTI content, including by framing or similar means, is expressly prohibited without the prior written consent.
SHARE THIS STORY
Print this article 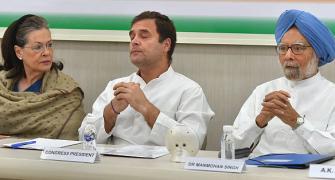 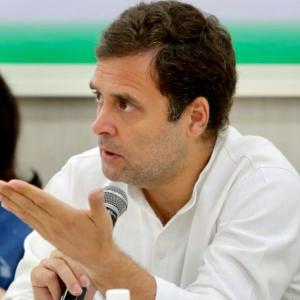