The issue of a separate Telangana state was on Monday discussed by Congress President Sonia Gandhi with senior party leaders, including union Ministers, amid growing demands for an early decision on the matter.

Home Minister Sushil Kumar Shinde and also his predecessor P Chidambaram, who is now Finance Minister, were present in the deliberations.

The issue of Telangana was discussed but there was no decision, a senior leader said.

The meeting assumes significance as there is growing pressure on the party high command to take an early decision on the politically volatile issue which has divided Andhra Pradesh on regional lines.

The Telangana issue was raised in Andhra Pradesh assembly session on Monday in Hyderabad when opposition Telangana Rashtra Samiti disrupted the proceedings demanding a resolution passed by the House seeking creation of the separate state.

Chief Minister N Kiran Kumar Reddy ruled the passage of a resolution in the assembly but hoped the Centre would take an early decision on Telangana issue.

The TRS has time and again said it would merge with Congress if the latter grants separate Telangana statehood.

N Chandrababu Naidu-led TDP had also given hints that it was not against carving a separate state out of Andhra Pradesh. Congress leaders from Telangana, including party MPs, are also up in arms on the issue.

The Telangana issue and the emergence of YSR congress has created a major problem for Congress in the state which was its strong-hold till recently and therefore partymen are wanting that the leadership should take urgent measures to counter the trend.

The Congress in the state is sharply divided on the statehood between leaders coming from Telagnana and those from outside the region. 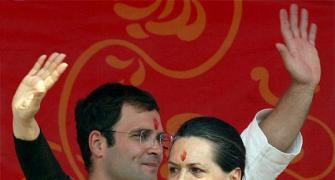 Rahul Gandhi, the soon-to-be mantri?
Assets case: Jagan to be in jail till September 28