Innovator and educationist Sonam Wangchuk, the real life Phunsukh Wangdu of Bollywood blockbuster 3 Idiots, has developed an eco-friendly solar heated tent that Army personnel can use in extremely cold places like Siachen and Galwan valley in the Ladakh region. 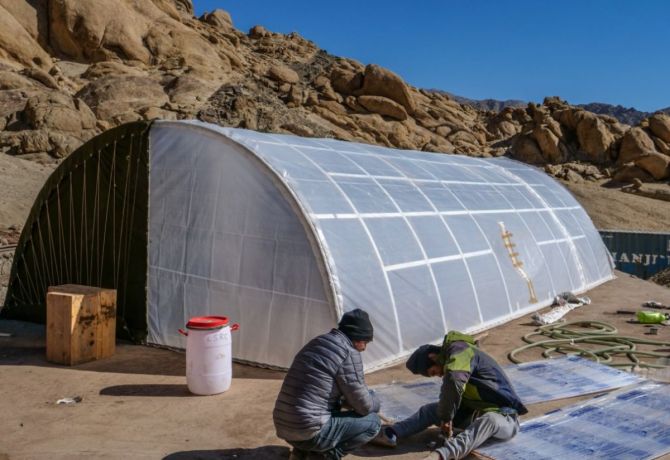 Wangchuk, who has many environment friendly innovations to his name, said the solar heated military tent, besides saving on use of fossil fuel and its ill effects on environment, increases the safety of the military personnel.

"This tent uses the solar energy trapped during day time to keep the soldiers' sleeping chamber warm during night. Since there is no use of fossil fuel, it saves on money and also is emission free," he said.

The innovator said the temperature inside the sleeping chamber of the military tent can be increased or decreased by corresponding increase or decrease in insulation layers.

"The sleeping chamber has four layers of insulation and it gave a temperature of 15 degrees Celsius at a time when outside temperature was minus 14 degrees Celsius. The number of layers can be reduced for warmer places," he added.

Wangchuk said the temperature inside the tent should not be too cozy as the soldiers have to be ready to fight the enemy in the open where temperature can be as low as minus 30 degrees Celsius in places like Galwan valley.

While Wangchuk extensively referred to last year's India-China stand off in Ladakh, he said he had made an earlier version of solar heated tent 15 years ago for shepherds who were engaged in rearing of Pashmina goats which produce high quality Cashmere wool. Referring to new prototype, Wangchuk said the tent is portable and can accommodate 10 soldiers.

"No component of the tent weighs more than 30 kg which makes it easily portable. The tent is disassembled into 30 to 40 components," he said.

Wangchuk said the weight of components can be brought down to 20 kg each by using superlight aluminium material.

"That version will be more expensive that the current prototype," he said.

He acknowledged the support provided by the Army in developing the solar heated tent, saying 'it has been designed keeping in mind the requirements of the Army'.

The innovator said it took his team at Himalayan Institute of Alternatives Ladakh (HIAL) one month to make the prototype of the solar heated tent.

The tent has been designed keeping in mind the places like Siachen glacier and Black Top Hill, the 55-year-old innovator said.

"It will save 500 tonnes of carbon dioxide and crores annually," he said while asking his one million subscribers on YouTube channel to 'stay tuned for the video'.