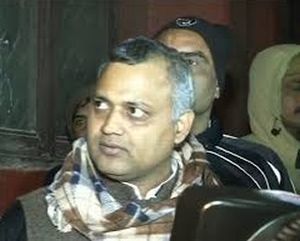 Former Delhi Law minister Somnath Bharti broke down during questioning by investigators, who on Wednesday took him to his Dwarka residence where he came face to face with his wife in connection with the dowry harassment and attempt to murder case.

The police also added Section 212 of IPC (harbouring offender) in the FIR registered against Bharti, and said that so far they have identified five persons who allegedly sheltered the legislator while he was on the run.

"We have added Section 212 of the Indian Penal Code in the existing first information report and shall ask the court for an extension of Bharti's police custody at least by a day.

"We need to take him to all those places where he had taken shelter during the run and make him confront all the persons who had harboured him," said Joint Commissioner of Police (Southwest) Dependra Pathak.

Meanwhile, an official privy to the investigation said that Bharti broke down during his interrogation last night when he was asked specific details about how he used to assault his wife and why he did so.

The police also asked him to clarify the allegation of unleashing his pet dog on his wife, Lipika Mitra. They also asked him about a particular derogatory word which, Mitra had claimed, compelled her to report her ordeal to the police.

Bharti was also confronted with the driver of a Faridabad-based businessman, whose car he had borrowed and later fled from Delhi, said the official. The driver has recognised Bharti but the former law minister has so far claimed that he had never seen the driver.

In the wee hours, the policemen took Bharti, 41, to Dwarka apartment where he lived with his wife, to reconstruct events as and when they happened, said the official.

Mitra was present when Bharti was taken there. However, no conversation took place between them during the visit which lasted between 30 to 40 minutes, said the official.

Earlier, the police took Bharti to his office at Malviya Nagar and his mother's residence at Vasant Kunj, where his brother Loknath Bharti also lives. Lipika had alleged that she was also assaulted in that house.

However, the police have so far not been able to recover the knife with which Bharti allegedly tried to slit his wife's wrist, said a senior official. The accused member of Legislative Assembly has also not yet been able to produce any of the documents or records -- including a series of text messages -- which he claimed to have possessed in his defence.

In the evening, the policemen took Bharti's pet dog to a veterinary hospital in south Delhi where the Labrador Retriever is to be examined by an expert in the presence of its master.

"The objective is to examine whether the dog is capable of inflicting the kind of wounds visible near the victim's abdomen. It is also to be checked whether and to what extent it follows its master's command," said the senior official.

The senior official further said that the policemen will also preserve the dental impression of the dog, taking into consideration natural changes in the pattern which naturally occurs in a period of four years, which is again to be ascertained by the expert.