Some people at Jamia protest came prepared for arson: Police

Delhi Police on Sunday alleged that some people who were part of the agitation against the amended citizenship law came prepared for arson and torched vehicles. 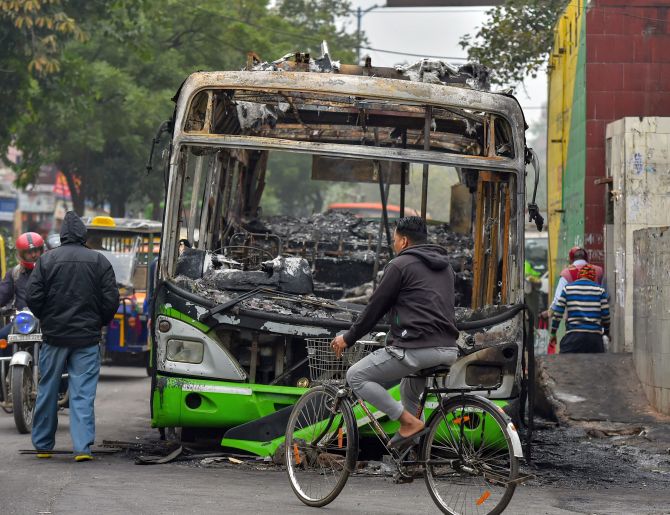 IMAGE: A charred bus is seen on a roadside in New Delhi during a strike against the Citizenship Amendment Act. Photograph: Kamal Kishore/PTI Photo

Deputy Commissioner of Police (Southeast) Chinmoy Biswal said nearly 1,500 people had begun a protest-march from Jamia university area around 3 pm but police stopped them near New Friends Colony and requested them to return and protest peacefully.

The protestors tried to block roads despite the force's request, according to police.

"Some groups in the mob came prepared for arson," he claimed.

Anti-social elements involved in the violence are being identified, he said, adding that Delhi Police had urged people to cooperate and maintain peace.

"Stones were pelted from inside the varsity at police personnel, forcing them to use teargas to disperse the "violent mob"," he said.

Police personnel entered the university campus to only control the situation, after protesters indulged in violence near New Friends' Colony area in south Delhi on Sunday afternoon, they said.

"The campus of Jamia university is a very undefined. It is located on both sides of the road. While the violent mob was going towards the university, they were throwing stones from inside.

"We entered the campus only to check these places from where stones were being pelted," Biswal said.

Police sources said no involvement of the local AAP MLA Amanatullah Khan has been found in the violence so far.

Police said no shots were fired, dismissing rumours and reports in this regard. They urged people to not trust rumours and speculations being circulated on social media.

They said strict action will taken against those who were involved in the violence.

"We are yet to check the identity of the people involved in the violence. The violent mob was throwing stones at police. If it was a peaceful protest, they would have dispersed peacefully. The protest was going on for the entire day. It has caused damaged to public property. It has caused arson and motorcycles were set on fire," Biswal said.

"Our only interest is to push them back so that they could be dispersed and the normalcy is restored in the area. We have no issue with the university students," he said.

In the violence and stone pelting by unruly violent agitators, several policemen have been injured including senior policemen have been injured including senior officers like southeast district DCP, Additional Deputy Commissioner of police (South), two Assistant Commissioner of Police, five Station House Officers, inspectors and other police personnel, he said.

Among them Head Constable Maqsool Ahmad is admitted in ICU with severe head injuries, he added.

Soon after the violence, Jamia Millia Islamia Chief Proctor Waseem Ahmed Khan claimed the Delhi Police entered the campus forcibly without permission and beat up staffers and students, who were forced to leave the campus.

Several states in the northeast and West Bengal have been rocked by violent protests over the Act. 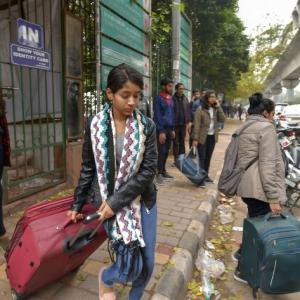 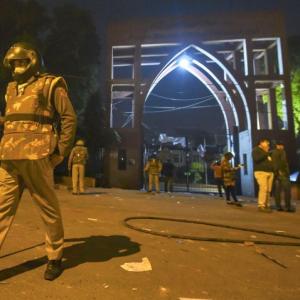