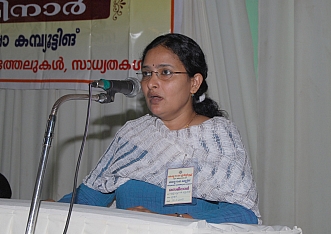 A young girl of 16 was transported across Kerala and sexually abused and raped by 42 men over a period of more than a month between January 16 and February 26, 1996. Subsequently, the court acquitted all, but one of the 39 accused. It was 17 years ago in 1996 that the infamous Suryanelli case exploded in Kerala.

Rediff.com's Shobha Warrier speaks to Suja Susan George who has been relentlessly fighting for justice for the victim and her family for the last 17 years.

In 1999, for the first time in Kerala, a fast track special court was set up to handle the case and it convicted 35 people for raping her in September 2000. In January 2005, the Kerala high court reversed the decision of the Special Court, and it acquitted all but one accused.

With this verdict started the isolation and ostracism of the family. The girl's family and the state prosecutor appealed to the Supreme Court in 2005 against the high court's verdict.

Last year in February, she was suspended from her job at the sales tax department as a peon for an alleged misappropriation of funds. After eight months, she was reinstated.

After the gang-rape in Delhi, there was a furore across the country against rapes and molestations, and as a result, on the January 3, the Chief Justice of India announced that the hearings on the Suryanelli rape case would begin within three weeks.

This has given hope to the girl's family that has been denied justice through the years that have passed.

One person who has been closely associated with the girl is Suja Susan George, a college professor turned left-activist. She also contested the last assembly elections against the present Chief Minister, Oommen Chandy.

In this telephonic interview from Kottayam, Suja Susan George talks about the case and the girl.

When did you first get involved in the Suryanelli case?

On January 16, it will be 17 years since the incident occurred and the girl disappeared. I got involved from that time onwards as a part of the organisations that took up the case to give justice to the girl and the family.

It was after the girl's family moved to Kottayam and she got entangled in an alleged financial fraud case that I got fully involved with the family.

What was her condition when you first saw her as a 16-year-old?

Her condition was pathetic. I was seeing her for the first time then. She looked bloated and far older than a 16-year-old but her neighbours and parents told us then that she was an innocent, skinny teenager before she was abducted. The girl who came back after 40 days was totally different both physically and mentally, all of them said.

At that time, she was severely injured in her private parts and had lacerations on her body. It was a horrifying sight. Mentally, she was so scared that she refused to meet anyone. So frightened was she of strangers that whenever someone came to her house, she hid behind a door.

I would say that her mental state has not changed much even today; she doesn't have the courage to face anyone. She is still in a depressed state, even after 17 years. Though we had taken her to psychologists and other counsellors, there is not much change in her as what happened to her was that horrifying.

The Kerala high court in its verdict after acquitting all men, was critical of the girl and asked why she remained there for 40 days and why she didn't escape from the custody.

That verdict was insulting not only to the girl, but to the entire womanhood.

It was for the first time in Kerala that a fast track court was set up to take up a case. Within a year, the verdict was out and 39 out of 42 men who were identified were given life sentence.

An appeal against the verdict to the high court and its judgement mocked at not only women but the entire human race.

Imagine she was only a 9th standard student and was known to be a little dull. And the court knew she was such a girl, yet some of the observations were extremely cruel; such as, why she didn't escape, why she didn't shout when she was taken to different places, etc. They went to the extent of saying she was enjoying sex all the time. There were many such cruel comments in the judgement.

It was against this judgement and the observations of the court that an appeal was made in the Supreme Court and 7 years have passed since then.

Once again the case has come to the light in the backdrop of what happened after the gang-rape in Delhi.

I feel the case went to the back burner and the girl never got justice because those involved in the case were highly placed; the moneyed and the political class.

What did you observe about the family when you first met them?

They were the typical middle class Christian family who lived a quiet life minding their own business. Both the parents are reasonably educated, and the father worked in the P&T department and the mother was a nurse. The eldest daughter was studying to be a nurse.

In their quiet anonymous life, a tragedy of this magnitude happens when the girl is abducted from the bus stand. Everything changes from that day for the entire family.

What made this middle class family stand apart was, though they followed true middle class values, they wanted to tell the world what happened to their young daughter.

It needed a lot of courage to let the world know this. Even the police advised them not to reveal this to anyone saying it would bring a bad name to the family, but they did not want such a horrible fate to befall any other girl.

It was then that the All India Democratic Women's Association came to know of this case and took it up.

When truth came out in the open, they had to run away from the small town they lived.

Was it because they were ostracised by those around them?

They were ostracised only later. First, the entire neighbourhood supported the girl and the family. When they were threatened, pressurised and even offered compensation so that the names of those involved did not come out in the open, all the people around them supported them wholeheartedly.

Why is it then that they had to flee the place?

That is the specialty of our society. It all happened after the high court let all the accused free and made such damning observations. Everything changed after that. Even the people of the village who supported them started turning their back on the family. Even the political parties that supported the girl until then, changed their attitude.

Could you meet them after the high court judgement?

They were totally shattered and on the verge of committing mass suicide when I met them. When the then government appealed against the verdict, and All India Democratic Women's Association and Ajitha also appealed, they became a little more hopeful.

Their social exclusion started then. Even their own friends and family also ostracised them. For example, when the girl's grandmother passed away, her father was not even informed by the family.

None of their relatives wanted the family to be seen with them. It is one family that 'brought shame' to everyone. They were not invited to any of the weddings in the family. They were isolated completely from everyone.

The last straw was when someone started a college near their house and every day, when the college bus passed in front of the house, it slowed down and the students heckled the family. Unable to bear this insult, one night, they just fled the place selling their property.

Fortunately, when they came to live in Kottayam, nobody knew who they were. So they could continue their lives rather anonymously.

The government gave the girl the job of a peon at Changanassery near Kottayam. But some powerful people were hell-bent on harassing the girl. The alleged money embezzlement was as a result of that.

How did you get personally involved with them after the incident?

When the news of the money misappropriation and suspension came in the papers, some of my activist friends asked me to find out the truth. By then, I was also active in politics.

When I went and met the family, I saw what a miserable life they were leading. The case shattered them even more.

Under threat from officials, they pawned all the jewellery they had and deposited all the money back. They thought with that, the harassment would end.

But on the February, 6, 2012, when she was waiting to board a bus, the crime branch police arrested her, in public. It was done to humiliate her. She had to be in remand for seven days and it was only on the 8th day that she was given bail. After that, she was suspended from her job. She was reinstated only after 8 months.

Was she affected badly by the case, or, was she indifferent to what was happening to her?

She is always in a depressed state and with this, she withdrew even more. I found that she always lay in a corner of the house, eyes closed, not talking to anyone.

Do you call her a person who has been denied justice by both law and society?

Definitely. Everyone in this society is responsible for what she suffers. Today, media is after me to get an interview with her but when the misappropriation case was clamped on her, I begged everyone including the most popular newspapers in Kerala to write about what she was going through. But nobody came forward.

The language used by the mainstream Malayalam papers describing her when she was arrested for money laundering was deplorable. They even wrote her name. I would say they showed no conscience.

How does she react now when the media wants to remind her of what happened to her 17 years ago? Is it not like reliving all those horrendous moments?

I am extremely close to her and her parents now, and I know how all of them feel. I find that she is indifferent to what is happening around her. When I ask her questions, she answers like a machine, and that too in very few words.

A few days ago, she telephoned me and said that after the sudden media interest, people have started recognising her in the neighbourhood. She was very upset with the cruel and rude comments she gets at the bus stop and other public places.

How much would you hold the Kerala society responsible for what this woman has been going through for the last 17 years?

I will hold this society wholly responsible and am also very critical of the way it behaved till now. I will criticise the people, the political parties and society as a whole for the way she is being treated.

This family stood for every woman in this society but what did they get in return? They could have remained silent like many others do but they didn't want this to happen to another girl. This society did not appreciate their courage but victimised them for being courageous.

When she was arrested again, this society should have risen up to support her but only the social media supported her.

Now that the Supreme Court has decided to take up the case again, do you feel though delayed, she would get justice?

Frankly, I am very anxious.

But when the news came out, I saw an indescribable energy in the family. They were down and out till now but this has given them renewed hope.  If something goes wrong, I do not know how the family would take it. That hopeful are they of getting justice... finally after 17 years.