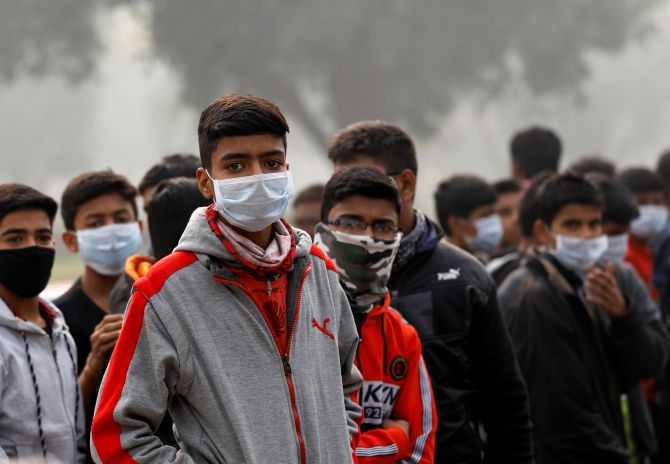 The noxious smog resulting from raging farm fires and unfavourable weather pushed pollution in Delhi-NCR towards the 'emergency' zone on Wednesday, prompting authorities to order closure of schools till November 15 -- a second time in two weeks.

With the Central Pollution Control Board fearing a similar situation will prevail over the next two days, Chief Minister Arvind Kejriwal said the odd-even road rationing scheme can be extended if needed.

The Environment Pollution (Prevention and Control) Authority (EPCA) also extended the restrictions on dirty-fuel based industries in Delhi-NCR, hot mix plants and stone crushers till the morning of November 15, as the MeT department said strong winds are expected from Friday, which will bring down the air pollution levels to the very poor category.

The schools in the national capital will be closed on Thursday and Friday, the Delhi government said.

On November 1, the Supreme Court-mandated panel EPCA declared a public health emergency as air pollution neared the emergency levels and the administration ordered closure of schools till November 5.

Rohini and Dwarka Sector-8 were the most-polluted areas with an AQI of 494, followed by Nehru Nagar (491) and Jahangirpuri (488).

According to weather experts, a fall in the temperature and wind speed led to the accumulation of pollutants. The problems were compounded by a cloud cover that blocked sunlight.

Incidents of stubble burning in Haryana and Punjab have increased and northwesterly winds have been bringing more farm fire plume to the Delhi-NCR region, they said.

However, they said, the situation is likely to improve on Friday with an increase in wind speed due to a fresh western disturbance and a dip in farm fires.

A large number of children were exposed to the harmful spike in pollution as schools remained opened on Wednesday.

Pictures of schoolchildren with their faces covered with anti-pollution masks and handkerchiefs were shared widely on social media.

Scores of people also posted pictures of open burning of garbage and heaps of construction waste and dirt lying uncovered in several areas across the city.

As the air quality neared the emergency levels for the third time in less than a fortnight, Kejriwal said the road rationing scheme could be extended beyond November 15.

Reacting to it, Union Environment Minister Prakash Javadekar said, "We have seen that within 10 days of the implementation of the odd-even scheme, it (AQI) reached 600 as well as 200. Therefore, I do not want go into what connection it has with odd-even."

The scheme, implemented from November 4, is to end on November 15. It resumed on Wednesday after a two-day hold on restrictions in view of the 550th birth anniversary of Sikhism founder Guru Nanak Dev.

Both Javadekar and Kejriwal blamed stubble burning for the repeated episodes of smog and harmful spike in pollution in Delhi-NCR.

Stubble burning accounted for 40 of the pollution in the national capital but 'blaming and cursing one another will not help', Javadekar said.

Kejriwal said smog in Delhi has hit its image worldwide.

He said continuous efforts of the people of Delhi brought the pollution down by 25 per cent but neighbouring states, especially Haryana and Punjab, continue to burn crop residue disregarding strict directions from the Supreme Court, negating all the gains made so far.

He reiterated that paddy straw can be used to produce compressed natural gas and coal which will also increase the income of farmers.

Perturbed by the depleting air quality, the Supreme Court also directed the Centre to explore the feasibility of a hydrogen-based technology as a permanent solution to the air pollution in the Delhi-NCR region and other parts of north India.

According to the government's air quality monitor SAFAR, the share of stubble burning in Delhi's pollution was 22 per cent on Wednesday. It was 25 per cent on Tuesday.

A pungent smog lingered over Delhi-NCR for around a week after Diwali as a result of emissions from firecrackers, stubble burning and unfavourable weather.

Last week, the apex court had pulled up the Centre and state governments for their inability to curb stubble burning in Punjab and Haryana and bring air pollution in Delhi under control.

It had also ordered that all farmers be given a Rs 100 per quintal incentive to prevent them from setting their fields on fire in preparation for the next crop, and provide them free machines to get rid of the agriculture residue.

The period between October 15 and November 15 is considered critical as maximum number of stubble burning incidents take place in this span in Punjab and adjoining states, which is one of the main reasons for alarming spike in pollution in Delhi-NCR.