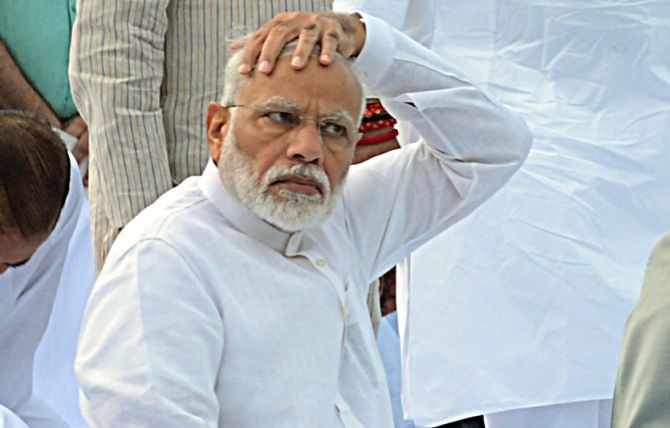 The Congress on Friday hit out at the government, saying the slump in gross domestic product (GDP) is a 'Modi-made disaster', and demanded that a financial emergency be declared in the country.

The truth can no longer be hidden despite 'headline management' by the ruling dispensation, the opposition party said.

Sharp deceleration in manufacturing output and subdued farm sector activity pulled down India's GDP growth to over six-year low of 5 per cent in the April-June quarter of 2019-20, according to official data released on Friday.

Global issues had no role play in the slump in GDP, the Congress claimed, adding that a white paper should be released on the 'shrinking economy and rising frauds'.

'GDP growth tanks to 5 pc. Demonetisation, hasty GST, and incompetence continue to show results. Slump is not due to global issues. It is a pure 'Modi-made' disaster,' Congress spokesperson Rajeev Gowda tweeted, using the hashtag 'ModiHaiToMandiHai'.

'Can economy get any worse and new distractions emerge? Keep your seat belts on,' he said.

The Congress said low GDP growth was expected and alleged that the Bharatiya Janata Party-led central government had single-handedly 'murdered' the Indian economy.

'Convenient time to hold a PC and attempt headline manipulation, but you can't hide from the truth Madam FM Nirmala Sitharaman,' it said

"The dismal and disappointing GDP data only reflects it."

"However, the malady is much bigger than what it appears to be. There is complete economic downturn, virtual shutting of manufacturing, lagging exports and surging imports, besides loss of millions of jobs in all sectors.

"The myopic BJP government is pre-occupied in shoddy headline management and cover up job, instead of addressing the structural issues ailing the economy. This is a classic case of quacks turning into surgeons. Naturally, patients will be dead before you even know," he said.

Congress leader Jaiveer Shergill said though the BJP is projecting that 'all is well' in the economy, the case was not such, and the GDP figures proved it.

"The GDP figures are testimony of fact that the BJP government has single handedly murdered the Indian economy by injecting a lethal dose of unemployment, industrial lockdown, tax terrorism and instead of saving economy from black hole they are selling propaganda of 5 trillion USD economy goal," he said.

"The BJP has been consistently projecting that 'all is well' with the economy but now official GDP figures prove beyond doubt that 'all-economy is in the well'," Shergill said.

The BJP should apologise and declare a national emergency, he said and accused the Centre of destroying the credibility of the economy and the banking system.

Shergill demanded it should declare the names of wilful defaulters, along with the details of their non-performing assets (NPAs).

"The Congress demands that a financial emergency should be declared in the country," he told a press conference here earlier.

"We reiterate that the BJP government release a white paper on the shrinking economy and rising frauds," Shergill said.

His party colleague and spokesperson RPN Singh said growth rate is falling continuously, but the government has no answers.

If the GST was implemented properly, such a situation would not have arisen, Singh said.

"This government seems to be diverting issues. There is a need to declare an economic emergency in the country. We are going down so fast and the government has no clue," he said.

Congress spokesperson Gaurav Vallabh said it is getting clearer by the day that the country is heading towards a major recessionary phase.

"This is a classic case of recession under expansionary trends, as whenever there are three continuous quarters of growth recession (reduction in growth quarter-on-quarter), the chances of slipping into a full-blown recession are significantly higher," he said.

Vallabh said once the June 2019 quarter numbers are announced, it will be clear that India is witnessing a reduction in growth for five consecutive quarters.

The problems this phenomenon has put forth are: natural recovery did not occur and the country had to solely rely on monetary policy actions, while the short-term stimulus remained short-term and only helped in assuaging wounds, he said.

Shergill said the BJP should come out of campaign mode and take a corrective mode to save the economy. The RBI has red-flagged that the economy is sinking, he claimed.

"Sinking economy, shrinking savings, closing businesses, evaporating jobs is a sad state of Indian economy but the BJP is refusing to acknowledge that," Shergill said.

The economy can be summarised in bank frauds that increased by 74 pc. The GDP has fallen at a five year low, industries are dissolving like 'biscuits in a tea cup' and jobs are evaporating faster than acetone, Shergill claimed

"But, the BJP is behaving like a thick-skinned government, completely insensitive, aloof to a fatal crash we are headed towards. BJP is depicting anti-national behavior by refusing to address the deepening, worsening economy crisis," Shergill said.