Covid and crematorium: Slum dwellers grapple with smoke, stench and fear of disease

The smoke hangs in an ash grey cloud over their homes and the acrid smell from more than 200 cremations a day doesn't leave, they say, permeating as it were their very pores. For the residents of Shaheed Bhagat Singh Camp, living next to a crematorium is as much a struggle as keeping COVID-19 at bay. IMAGE: A man carries a stretcher used for carrying bodies of victims who died due to the coronavirus, during a mass cremation at a crematorium ground in New Delhi. Photograph: Danish Siddiqui/Reuters

Being in such close proximity to a crematorium is never easy, say the residents of the slum colony in west Delhi. But when the number of bodies being burnt goes up from about three to four a day to about 200-250, it's about visitations of death and also the fear of the contagion looming large over every aspect of their lives.

They wake up to the smell of burning bodies and sleep to it at night, said Saroj, one of the 1,500 odd people living in the 900 shanties in the slum colony located just a few metres away from the Paschim Puri crematorium.

"It is a very scary situation. We keep seeing ambulances pass by and constantly there is smell and smoke, whether it is day or night,” the 38-year-old ragpicker said.

The fear of contracting COVID-19 is constant and the glowing fires from the crematorium that now operates 24X7 allows neither peace of mind nor sleep, she said.

On the night of April 14, a fire broke out in the slum cluster and Saroj and scores of her neighbours are still recovering from that. There were no casualties but 30 shanties were burnt.

Half of Saroj's house also got burnt in the fire. And just as she was recovering, came the weeklong lockdown aimed at breaking the chain of COVID-19 transmission.

"We have arranged for a truck and we will leave this place for our village in Maharajganj (in Uttar Pradesh). At least we will be spared this constant looming feeling of death," Kakoli said.

"Everyone is holed up inside the house. We don't even switch the fans on because we fear we will get corona through the air. The atmosphere has been particularly traumatic for children," said the widow with three children.

Many others, mostly from Uttar Pradesh and Bihar, are also planning to leave for their villages. Several people had left earlier as the second wave of COVID-19 gathered pace and those that are left fear their homes won't be livable for much longer given the continuous smell and stench.

Many residents said it was not so bad earlier because the cremations took place at the far end of the crematorium. Now with the numbers going up -- Delhi on Saturday recorded 357 deaths, its highest yet, and over 24,000 fresh cases -- the entire area is being used. When the residents protested, officials, they said, told them they have government orders to do so.

Saroj, who lives with seven family members, including three children, is also planning to go back to her village in Uttar Pradesh.

With the cases rising, she has lost her job as a ragpicker.

"Some days we just drink water, some days we get food through NGOs. The situation is terrible."

The stigma of living adjacent to a crematorium has also led to some people losing their jobs as domestic workers in the upscale Paschim Vihar colony nearby.

A 16-year-old girl, who worked as a part-time domestic help, said her employers asked her not to come to work because her house is close to a ‘shamshan ghat'.

"They fear we will carry corona with us so we are thinking of returning to our village. But even that costs money. We will need Rs 2,000-2,500. How can we afford it?” she asked.

Another 12-year-old said some have the option of returning to their villages but he doesn't have any place to go. This is where his family has lived for decades.

"Where do we go? If we leave, what will we earn? Already our earnings have drastically reduced in this corona pandemic," said the young boy who does part-time domestic chores in Paschim Vihar.

Vijay Kumar, a social worker at child rights NGO CHETNA, said many children are into substance abuse and are being roped in by crematorium workers to help in carrying the bodies.

"They are not given any protective gear and are being tempted with money - the more the number of bodies they carry, the more they money. It is very risky for them," he said.

Sanjay Gupta, director of CHETNA (Childhood Enhancement Through Training and Action), is worried about the long-term impact.

Children, already living in tough lives, are seeing corpses of Covid patients being burnt day and night in front of them. “This will leave a deep impression on their mental well-being and thinking,” he said.

“With this fear, the children are ready for migration along with their whole family as the people of the community are also involved in this cremation process which can be an active source of spreading corona,” Gupta added.

He said it is time for people to come forward and help children. Instead of cremating corpses inside cities, the government should make arrangements somewhere outside, maybe in border areas, he said. 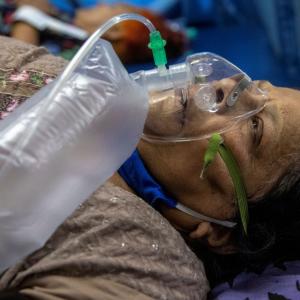