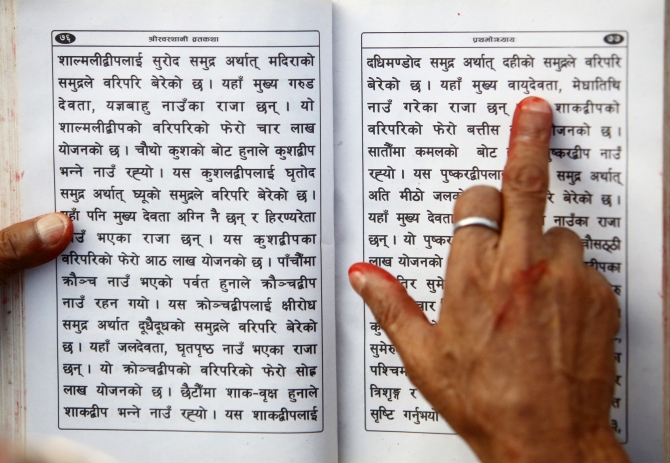 Image: A Hindu holy man holds the holy book on his hand as he recites verses
Photographs: Navesh Chitrakar/Reuters A K Bhattacharya

What is there in Wendy Doniger's book that has raised the hackles of the Hindu right wing? A K Bhattacharya explains

On the face of it, there appears to be no reason why Wendy Doniger's books on Hinduism should rile anybody, including even the right-wing Hindu nationalists. In interpreting and analysing Hindu scriptures in her books, she remains faithful to the original texts and offers her understanding of how the Hindu mind has evolved over time, refusing to be bracketed within the narrow confines of monolithic ideas.

You may disagree with some of those ideas and, indeed, she even confesses that what she writes is "a history, not the history of the Hindus".

But what you cannot simply ignore is Doniger's strong academic credentials and the ease with which she explains even the most complex of Hindu beliefs enunciated in the Vedas, Upanishads and many Tantric texts. Remember that she holds two doctorates -- one in Sanskrit and the other in Indian studies -- from Harvard and Oxford, and has taught at some of the world's best universities.

Yet, The Hindus: An Alternative History, which came out in 2009, is now in the eye of a storm in India, where its publishers have decided to pulp it. This brings to an end a four-year long legal case that had challenged some sections in the book which the petitioners argued had hurt the religious sentiments of the Hindus.

But there seems to be no end to the controversy over the book or its author. And if the petitioners are to be believed, a similar fate could await another of Doniger's books published in India last year - On Hinduism, a compilation of essays that she has written over the years.

It will, of course, be naïve to conclude that Doniger had no inkling of the kind of trouble she was courting by writing a book on the Hindus and their religious texts. The seeds of the book were sown during one of her lectures in England in 2003, where a Hindu fanatic had thrown an egg at her after she had explained the complex relationship between Sita and Lakshman, younger brother of her husband Ram. Mind you, the complex relationship was not cooked up by Doniger. 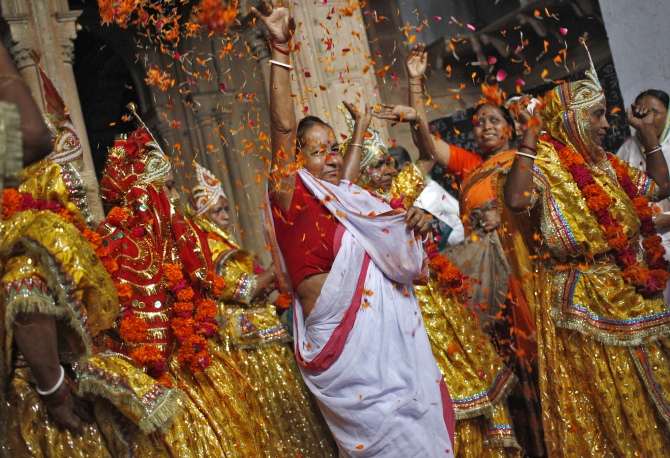 Doniger, therefore, was more than aware of the possibility of a strong pushback from the Hindu nationalist and made no bones about which sections of India could be upset by her book.

Outlining the rationale for writing The Hindus, she wrote: "Hindus nowadays are diverse in their attitude to their own diversity, which inspires pride in some, anxiety in others. In particular, it provokes anxiety in those Hindus who are called Hindu nationalists, or the Hindu right, or right-wing Hindus, or the Hindutva faction, or, more approximately, Hindu fundamentalists; they are against Muslims, Christians, and the Wrong Sort of Hindus.

The most powerful political organ is the Bharatiya Janata Party, with its militant branch, the Rashtriya Swayamsevak Sangh, but they are also involved in groups such as Hindu Human Rights, Vishwa Hindu Parishad, and the Akhil Bharatiya Vidyarthi Parishad. I will generally refer to them as the Hindutva faction or the Hindu right. This book is also alternative to the narrative of Hindu history that they tell."

Looking back at what happened in the last few days, it seems that Doniger's analysis of the right-wing Hindu mind was appropriate and the decision to pulp The Hindus was an unfortunate outcome of the rising anxiety among such Hindu nationalists, as feared by the author.

An indication of the anxiety of the Hindu right is evident from the kind of charges that have been levelled against Doniger's book. One such charge is that she is obsessed with presenting Hindu gods and goddesses in sexually provocative postures. The picture of the cover of her book, The Hindus, is cited as an example in support of such an allegation.

The cover picture is indeed provocative showing Krishna on the back of a horse strung around which are a large number of women who look like the cowherd women in love with him. Where is this cover picture from? It is a reproduction of a contemporary mural from Puri, in Odisha. 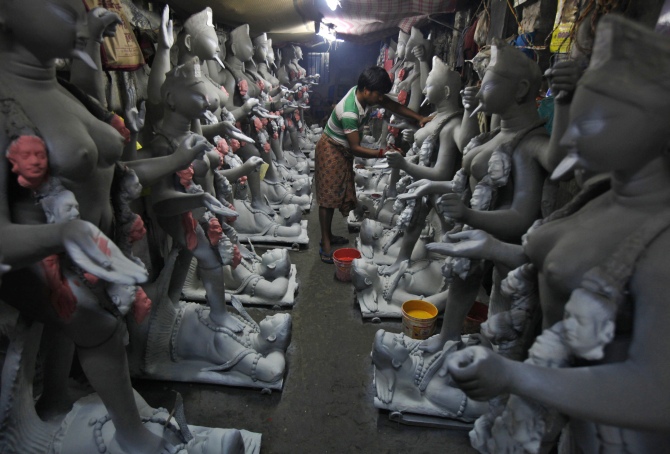 Image: An artist paints an idol of Kali at a workshop in Kolkata.
Photographs: Rupak De Chowdhuri/Reuters A K Bhattacharya

What does Doniger have to say about this?

Her explanation is worth recounting here: "It is an example of the contribution of a foreign culture to Hinduism, since composite animals of this type come from Persia and entered India with the Mughals, and an example of the intersection of court and village, as the image travelled from the Mughal court in Delhi to a village in the state of Orissa, the source of this contemporary example. It is an image of women, almost certainly painted by a man.

Depicting the god Krishna as the rider on the horse makes the Muslim image a Hindu image, and the rider on the horse is an enduring Hindu metaphor for the mind controlling the senses, in this case harnessing the sexual addiction excited by naked women. This multivocal masterpiece is, like Hinduism, a collage made of individual pieces that fit together to make something far more wonderful than any of them.

“To view the cover picture of the book only through a narrow religious prism would not only be unfair, but would do gross injustice to Doniger's highly creative and interpretative mind in imparting a new meaning to a contemporary painting.

Yes, to the conservative Hindu mind, Doniger's depiction of Durga, the goddess who embodies Shakti (source of all energy), could be disturbing. But then most conservative Hindus, perhaps the Hindu right as well, are not fully aware of the way Hindu gods and goddesses have been portrayed in many Puranas and Tantric texts. 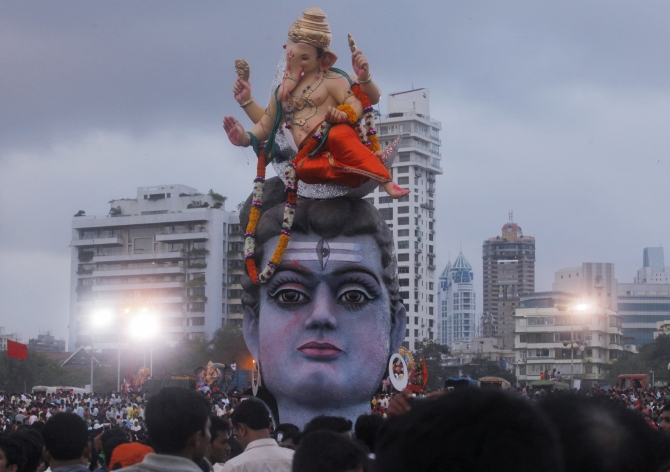 Image: Devotees watch idols of Ganesh, and Lord Shiva as they are placed on the seashore before immersion on the last day of Ganesh Chaturthi, in Mumbai.
Photographs: Danish Siddiqui/Reuters A K Bhattacharya

Should Doniger pay the price for bringing those references to light and present them in their true context? The story of Durga and Mahishasura is as well-known as the one of Kali standing on Shiva.

Many Hindus, whether they belong to the right or the left, are ignorant of what those deities stood for. But Doniger explains the background and significance of those postures in a manner that it enhances our understanding of the Hindu religion.

It is not even the narrative of Eklavya, the hunter who belonged to a backward community, or that of Satyakam, who was born out of wedlock, that could have upset the Hindu right.

Eklavya had to sacrifice his right thumb by chopping it off and paying the price to his Brahmin master, Dronacharya, who did not want a rival to his favourite disciple, Arjun. In contrast, Satyakam was accepted as a Brahmin and disciple by Gautam because the young boy had the courage of speaking out the truth about his dubious parentage.

Where Doniger may have upset the Hindu right more is not just by presenting these narratives to provide an alternative history of the Hindus, but by directly taking on the Hindu nationalists and challenging their narrow worldview. Consider her interpretation of what Madhav Sadashiv Golwalkar said about Hindu tolerance and intolerance in 1939.

"The statement by Golwalkar, a leader of the chauvinist Hindu organisation known as the RSS, in 1939, reflects a different sort of cultural schizophrenia from the creative dichotomies that have typified so much of Hinduism. The first half of his statement seems to me to express largely valid historical claims, while the political agenda of the second half contradicts those claims, paradoxically using the justifiable Hindu pride in religious tolerance to justify intolerance."

It seems the Hindu right was uncomfortable not just with Doniger's attempt at presenting an alternative history of the Hindus. They were perturbed by the direct attack she had launched against the Hindu nationalists, the BJP, the RSS and even its guiding spirit, Golwalkar.