Sign in  |  Create a Rediffmail account
Rediff.com  » News » 'Want death penalty for him... he has no guilt about killing my sister'

'Want death penalty for him... he has no guilt about killing my sister' 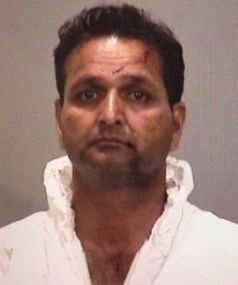 Confessed Balvir Singh, 42, who was charged with murdering his wife Anita Sindhu at their home in California, in court.  Hundreds of people, including Sindhu’s colleagues, community members and elected officials attended the service in Hayward, California on June 1. Ritu Jha reports

Balvir Singh, who came to the United States six weeks ago, confessed in the courtroom last week that he had killed his wife.

“I loved my wife and I killed her, mujhe phansi de do (hang me),” Singh, 42, who has been charged with one count of murder and booked at the Santa Rita jail, Dublin, California, said in court.

Singh has been accused of killing Anita Sidhu on May 25 at her home in Fremont and fleeing the scene with his passport. The police, after an extensive search, nabbed him in the neighbouring city in Milpitas and Singh confessed both to the Fremont police and in the Fremont superior court during arraignment that he had killed his wife.

The police report, physical and digital evidence, witness statements, a confession by the suspect and other evidence have all linked Singh to Sidhu’s death. His next hearing is on June 18.

Showing no signs of remorse in court, Singh denied any help from the Indian government, when the judge asked if he would like to be contacted by Indian officials in the consulate.

“I want the court to give him maximum punishment -- death penalty,” said Shiv. “Did you see the way he was talking to the judge? He has no guilt about killing my sister.”

Anita had been working for the past 15 years as a quality control inspector at Axygen Scientific, Inc in Union City.

She lived with her extended family on Royal Palm Drive, Fremont. Singh joined her from India six weeks ago.

Anita’s body was found May 25, inside the house. There were several members of the couple’s family in the home at the time, but nobody reported seeing the slaying occur, police spokeswoman Geneva Bosques said. Evidence at the scene linked Singh to his wife’s death, she added.


Image: Friends and family pay their last respects at Anita Sidhu's funeral at the Chapel of the Chimes in Hayward, California. (Below) The accused Balvir Singh who strangled his wife.

Anita’s funeral was held at the Chapel of the Chimes in Hayward, California on June 1. Hundreds of people, including her colleagues, community members and elected officials attended the service.

Her death brought into focus the issue of domestic violence in the Indian-American community.

Teresa Cox, running for California state assembly district 25, said she had met Anita a week before her death.

“Anita was strong and we were working together to make the community a better place. She was a victim of domestic violence and I stand with her in terms of helping other women and making sure women could be able to live life and live their legacy for other generations to be able to come together," she said.

“We cannot avoid this. The community has to do something to create awareness about such crimes against women,” he added.

Asha Sachdeva, who has known the family for 12 years, told Rediff.com, “Anita and Balvir knew each other since high school. This is very sad. They were married for seven years and he was not able to get a visa so she would often go to India to meet him.”

“This April her mother called me and told me that Anita’s husband was finally coming here. But he killed her. She is dead. She brought him here with so much hope and now he will experience America in jail,” Sachdeva added.


Image: Members of the community attend the Anita Sidhu's funeral service at Chapel of the Chimes in Hayward.