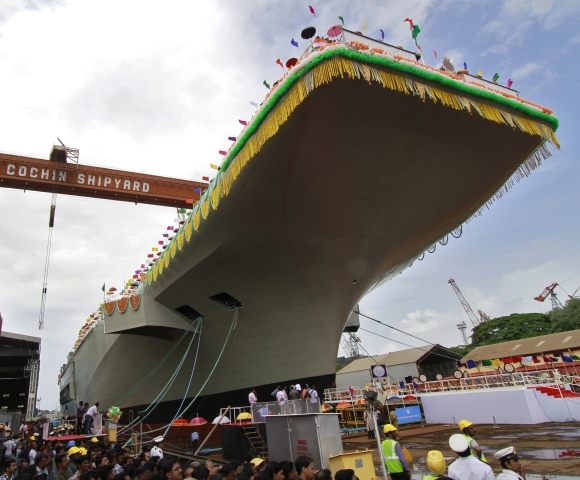 At Kochi, on Monday, a giant step was taken towards the rebirth of the Indian navy's iconic former flagship, the INS Vikrant.

On March 4, 1961, on a cold, blustery morning at Belfast, Northern Ireland, in the presence of the then Indian High Commissioner Vijaya Lakshmi Pandit, INS Vikrant was commissioned as the Indian navy's first aircraft carrier.

During the 1971 war, the Vikrant had imposed a blockade on Bangladesh, and its Seahawk fighters wreaked havoc on Pakistani forces and vessels in Chittagong and Cox's Bazaar. On January 31, 1997, the Vikrant was decommissioned; it is now a floating maritime museum, moored off Mumbai.

But good navies keep their battleships alive; and India's first aircraft carrier will be reborn as its first indigenously built carrier. At Cochin Shipyard Ltd on Monday, the reborn Vikrant was launched.

This signals the completion of its basic structure and the start of its next phase of "outfitting," in which internal machinery, wiring, piping, weapons and sensors will be fitted. This will boost the vessel from its current 18,500 tonnes -- already as much as the original Vikrant -- to a hefty 40,000 tonnes.

The planned weight of 37,500 tonnes will be overshot significantly, say naval designers, due to weight over-runs on several systems. That will not affect performance, they say. 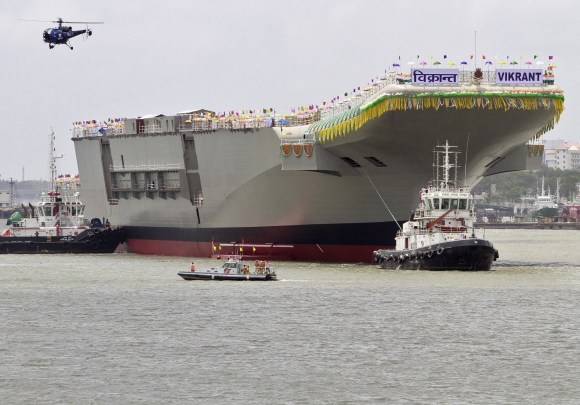 That weight will include 4,500 tonnes of engine fuel, 1,500 tonnes of aircraft fuel, 1,000 tonnes of fresh water and 500-1,000 tonnes of ammunition. A crew of 1,500-1,600 persons will operate the vessel, and there are facilities to carry a significant number of soldiers (or marines) for operations if required.

It will also include two squadrons (12 fighters each) of MiG-29K and Tejas Light Combat Aircraft (LCA). In addition, there would be about 10 helicopters, mainly for anti-submarine searches and to function as airborne command systems.

In nautical tradition, the Vikrant was launched by a lady -- Elizabeth Antony, wife of Defence Minister AK Antony. After an invocation to the Gods was sung, she smashed a coconut on the ship's bow, a first test for the indigenous SAIL-supplied steel that the Vikrant is built from. It passed comfortably.

The launch itself was not the spectacular entry into water of smaller warships, which transit dramatically on rollers from land into water, creating an enormous splash and debris bobbing in its wake.

The 260-metre-long Vikrant is simply too large for that. Instead, it was towed out of the dry dock sedately and berthed in the Vembanadu Channel outside. 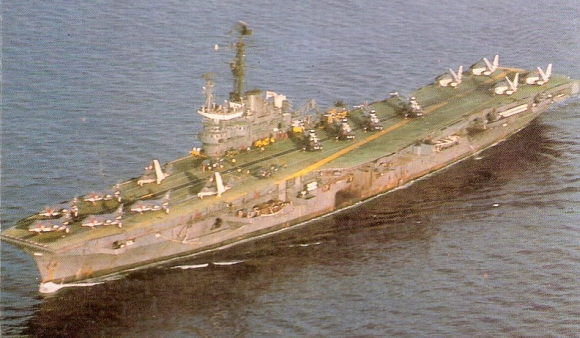 Over the next year or so, it will be outfitted and its superstructure built.

This five-story-high structure on the deck will contain the bridge, radars and the Russia-supplied aviation complex that will control flight operations. By 2015, with weapons and sensors in place, the Vikrant will commence an extensive process of sea trials and aviation trials. After that, it will join the naval fleet.

For the navy, which built its first warship, INS Ajay, in 1961, the Vikrant is the latest triumphant way stop in a gritty journey towards self-reliance.

India now builds sophisticated warships, such as the Kolkata-class destroyers in Mazagon Dock, Mumbai, but these have been under 7,000 tonnes. The Vikrant's sheer size makes its construction a capability leap.

Said Indian Navy chief Admiral D K Joshi on Monday, "The navy has always been conscious that designing and building warships is a core strategic capability for any nation." 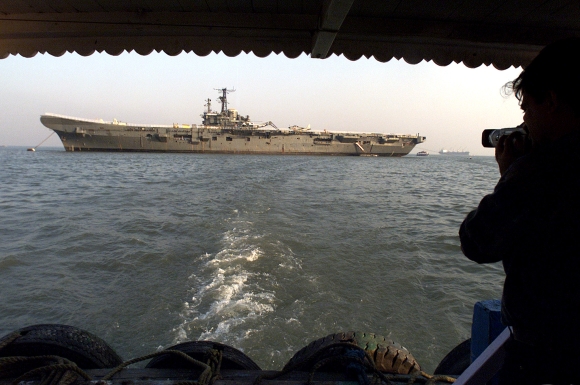 Image: A photographer shoots pictures of the Indian museum ship the Vikrant off the Mumbai coast
Photographs: Arko Dutta/Reuters

When commissioned in 2018, the Vikrant would be the navy's third aircraft carrier. INS Vikramaditya, formerly the Admiral Gorshkov, will arrive later this year, said Antony on Monday. Operating from the new naval base of Karwar, the Vikramaditya will be the flagship of the western fleet. The much older INS Viraat will spearhead the eastern fleet, operating from Visakhapatnam.

Vice Admiral K R Nair, the navy's Director General for Warship Acquisition & Production, says that the Viraat's recent life-cycle-extension refit will enable it to continue in service for the foreseeable future.

But the Vikrant's commissioning will achieve a longstanding naval ambition -- to have three in-service aircraft carriers, so that at least one is available for each of the two seaboards, western and eastern, even when one aircraft carrier is undergoing maintenance or life-cycle-extension. "The launch of an indigenous aircraft carrier is the first step in a long journey, but an important one," declared Antony on Monday.

Speculation continues over the size and capabilities of the next vessel, the so-called indigenous aircraft carrier 2 (IAC-2). Analysts have projected that it would be in the 65,000 tonne category, making it a significantly more capable vessel with many more aircraft.

But Vice Admiral Nair, the navy's top warship planner, insists that the navy has not reached any conclusions. Decisions to be taken are: how many aircraft the IAC-2 will carry and, therefore, its size and tonnage. While the Vikrant carries 34 aircraft, the navy might well choose greater punch, with 45-50 aircraft.

Size would determine the propulsion system; gas turbines are less complicated, but add 5-10,000 tonnes of fuel load. But a nuclear reactor comes with its own complications, such as a long refueling period during which the vessel is out of action.

Another key decision for IAC-2 relates to the launch system. As Business Standard has reported, US company, General Atomics, briefed the navy in May on the new-generation "electro-magnetic aircraft launch system" (EMALS) that will equip the next generation of US Navy aircraft carriers.