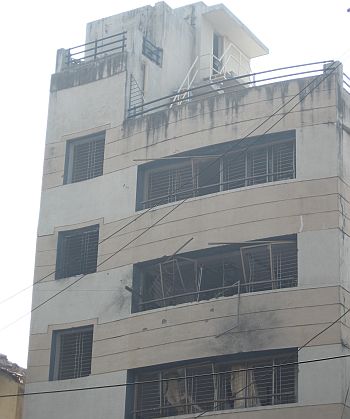 Three years after the Chabad House in south Mumbai was pulverised by terrorists, the Jewish Centre is yet to get a refurbished look and though the court case over renovating the site has been settled, the necessary permission from the civic body is still to come through.

Today, Chabad House, one of the targets during the November 2008 terror attacks, stands as a mute testimony to the three-day siege. The badly-damaged site is covered with bamboo-supported green cloth, awaiting a new look.

With security guards posted in the narrow lanes leading to the five-storey building, also called Nariman House, it is hard to miss the scars and silence that envelopes the centre which is otherwise located in a bustling area.

As one enters the building, the first floor, which had a kosher kitchen for preparing food for tourists, is now stacked with cement bags and construction materials, with contractors and labourers present around.

Walls of the second floor, housing a synagogue and a library, and the third floor, reserved for guests or tourists, are still riddled with bullet marks, a stark reminder of the havoc created by the heavily-armed terrorists.

The terror impact was even more pronounced on the fourth floor as almost every inch of the walls is pockmarked with bullets from both sides. The floorings have been removed.

On the fifth floor, official emissaries of the centre, the slain Rabbi Gavriel and his wife Rivka, lived. Their then two-year-on son, Baby Moshe, had a miraculous escape, thanks to his Indian nanny Sandra. 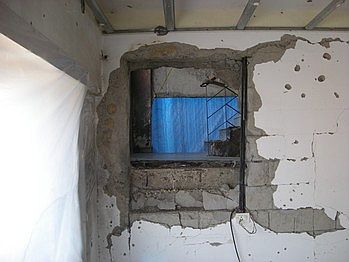 The marking of Moshe's height on the wall of his room by his mother, the drawings of birds and alphabets in Hebrew still remain the same. Furniture has been kept on this floor.

Soon after the court case was settled, plastering and repair work at the Chabad House, which had suffered extensive damage from gunfire and grenades, was to begin.

Following a dispute over renovation rights between officials linked to the centre, Brihanmumbai Municipal Corporation (BMC) disconnected electricity and water supply to the building.

"We are waiting for the final permits (from BMC) and we are preparing the site for renovations, which we hope will commence very soon," Rabbi Motti Seligson, who is connected with by the Chabad movement, told PTI.

"The court case has been settled but BMC has still not provided electricity and water. The consultants and the owner have applied for reconnection. Once the required permissions are in place, work would be completed within two-three months," a contractor, who was present at the house, said.

The new Rabbi and his wife have been appointed to manage the centre but they are not currently staying at the Chabad House. The couple has been reportedly staying at an undisclosed location nearby.

During the three-day terror siege beginning, November 26, 2008, two Pakistani terrorists entered the centre and killed six of its occupants, including Rabbi Gavriel and his wife Rivka, who was five-month pregnant.