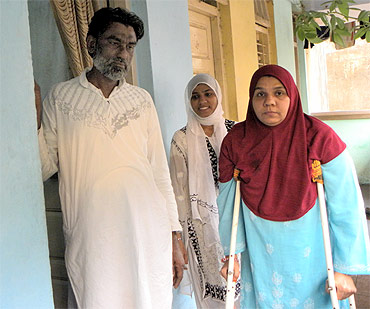 Sabira Khan was standing next to the taxi that exploded at Dockyard Road on November 26, 2008 -- the night 10 terrorists stormed Mumbai. After spending over Rs 6 lakh for treatment for which the family sold their shop and mortgaged their house, Khan still finds it difficult the walk. And her family of eight struggles to make ends meet.

Till three years ago, every evening Sabira Khan would walk some distance to a community hall near her house in the Mumbai Port Trust colony at Dockyard Road area to teach Muslim children Arabic, Urdu and preach Islam. Then, carrying her copy of the Koran, Khan would walk back home and after having their dinner and after prayers, the family of eight would call it a day.

On the night of November 26, 2008, Khan stood on the pavement across the street from her colony. She waited for a taxi that had pulled over to move on so she could cross the road.

The two ladies who got off the cab, haggled with the driver over some change and were walking away, while the driver was trying to get his due. Tired of waiting, Khan walked around the cab, rested her hand on its boot and stepped down from the pavement. Minutes later there was a loud sound and everything went dark.

Khan's son Hamid (23, then) who was with his friends across the road watched in horror as the taxi exploded and his mother was thrown almost 20 feet away. He ran towards her as she landed on the tar road with a thud. Briefly, he says, he fainted too.

He is not able to recollect how he recovered and rushed his mother to the nearby JJ Hospital. "My mother was the first 26/11 casualty at JJ," he said. "They refused to admit her; she was bleeding profusely. My friends, who accompanied me to the hospital, and I tried to tell them it was an emergency. But they refused to listen. They wanted a copy of the police complaint," he says.

'For 13 months, I kept going from one hospital to another' 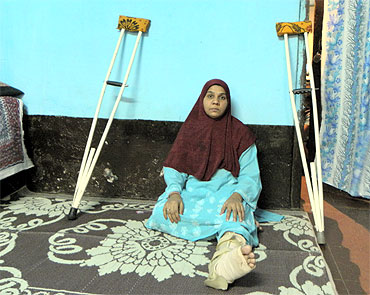 Hamid and his friends even got into a scuffle with hospital authorities and it was at least a few hours before the hospital admitted Khan.

Khan spent the 2009 New Year's Eve in the hospital, the Eids that followed in another and the next New Year's on yet another hospital bed.

"For 13 months, I kept going from one hospital to another," she recalls, trying to hold back her tears.

After having paid Rs 6 lakh for her treatment, Khan can barely walk. The nerves in her left leg have been damaged. It is still bandaged and "almost useless" as she puts it and her right leg is rather weak. She uses a pair of crutches to move around but does so with some difficulty.

Doctors tell her there is some hope, but with the family in heavy debts and cannot afford the treatment. They had to sell their cloth store in Mumbra and have mortgaged their apartment in Govandi to meet the medical expenses.

'Soniaji assured us we would be treated well but...' 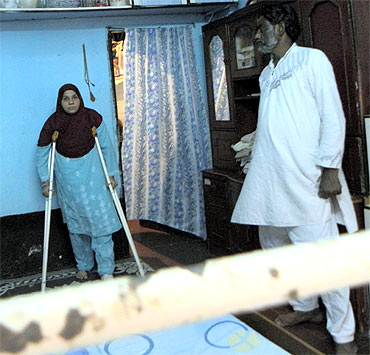 Image: After spending lakhs on treatment, the family now finds itself in debts
Photographs: Abhishek Mande/Rediff.com

Khan pulls out four bagfuls of documents, medical papers and letters addressed to politicians and goes on to narrate what seems to be a very sad but a scarily familiar story of a terror attack victim's attempt to seek compensation from the government.

At the JJ Hospital, where she was first admitted, she says, "I was treated shabbily."

Hamid adds, "I broke through security cordon and spoke to Sonia Gandhi about it. Soniaji assured us we would be treated well. She even gave us a telephone number and asked us to call up should there be a problem. A few weeks later the phone was disconnected."

While has rushing from pillar to post to get his mother treated, Hamid ignored his health. A piece of metal from the cab that exploded got lodged under his right eye and the wound worsened. A few days later, he too underwent a surgery. The wound has healed but the scars remain. 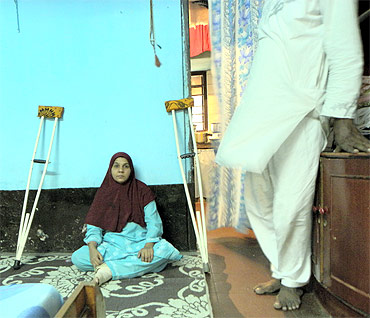 Khan's husband Abdul Majid -- an MbPT employee -- continues to be the primary wage earner in the family. The Taj Group had employed Hamid and his younger brother Khalid for a training period of a year.

Not the most entrepreneurial in the family, the two found themselves at sea after the training was over. Today, Hamid works in a private company and earns a small salary; Khalid also does some odd jobs. The other children -- Shaba, Shaheen, Shahid and Sajid -- are still students.

Khan has gone back to teaching. "I teach them are deeni baatein -- religious instructions -- on how to lead a good life as preached by Islam."

Referring to the 26/11 attack she said, "I am probably paying for whatever sins I may have committed."