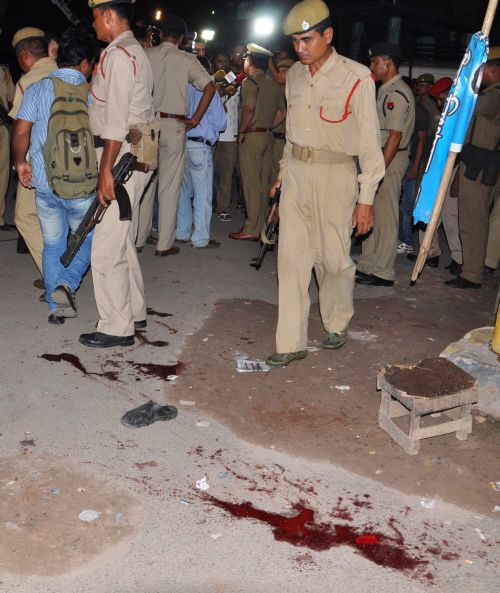 Image: Security personnel inspect the site of the grenade blast near the Guwahati railway station on Sunday
K Anurag in Guwahati

At least fifteen persons, including several police personnel, were injured when suspected militants belonging to the anti-talks faction of the United Liberation Front of Asom detonated a grenade blast near a police check-point in busy Paltan Bazar locality in the heart of Guwahati city at around 8 pm.

The suspected ultras apparently made a mockery of the high-alert sounded by the Assam government after ULFA cadres had triggered a series of grenade explosions in other parts of the state on July 23 and 24.

The condition of two injured cops was stated to be critical. 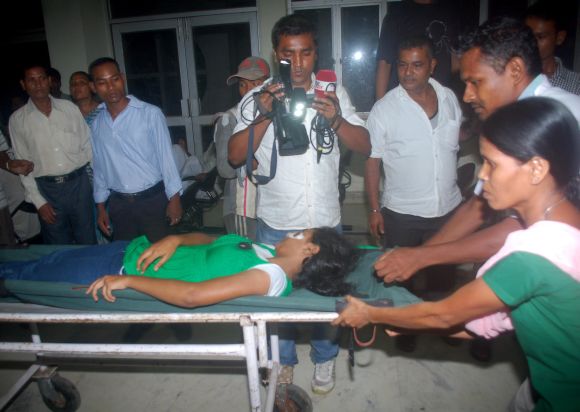 Image: A basket ball player from West Bengal, injured in the blast, being rushed to the Guwahati Medical College Hospital on Sunday evening

Police suspected that two motorcycle-borne militants hurled the grenade at a team of police-CRPF personnel on duty at the check point.

All the injured were rushed to Guwahati Medical College Hospital.

The three injured girls from the West Bengal basket ball team had arrived in Guwahati minutes before the grenade blast. They have been identified as Salma Banu, Jwala Jha and Priya Rai, according to initial  reports.

Police suspected hands of the anti-talks faction of the ULFA, or the ULFA (Independent) led by its fugitive commander Paresh Barua in the blast that was triggered in the busiest part of the city.

Senior police officials rushed to the spot after the blast in the busy area close to the high-security Guwahati railway station as well as Paltan Bazar police station.

Ruling Congress’ senior legislator Robin Bardoloi, who rushed to the blast site, stated that the area was not adequately lit though it was located in the busiest part of the city.

He also rued absence of CCTV cameras in the area. 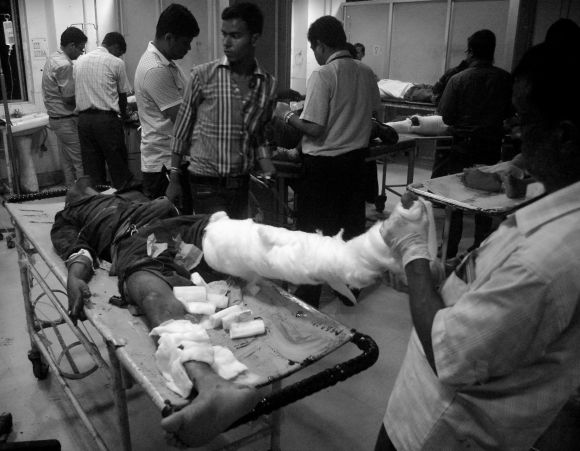 Image: A man injured in the grenade blast being treated at the Guwahati Medical College Hospital on Sunday

The blast occurred just a day after Assam Chief Minister Tarun Gogoi stated that the anti-talks faction of the ULFA was out to create disturbance in the state with the backing of “some foreign countries inimical to the country”.

Tarun Gogoi had condemned the incident and asked the district administration to identify the culprits and take necessary action.

The banned organisation had observed its annual 'Martyr's Day' on Saturday.