Image: The cover of Reema Abbasi's book, Historic Temples in Pakistan: A Call to Conscience

Hinglaj, Katas Raj, Kalka Cave temple, Panchmukhi Hanuman Mandir, Shivala Mandir... these are among the many ancient temples dating back to over 1,500 years in Pakistan chronicled by Karachi-based journalist and author Reema Abbasi in her book Historic Temples in Pakistan: A Call to Conscience.

Filled with her text together with vivid pictures shot by photographer Madiha Aijaz, the book sets out to 'ignite a discourse and the collective conscience of a nation numbed into silence, fear or false conviction of the supremacy of a singular religion – to institutionalise the fundamental right of will'.

According to Abbasi, her compilation makes a case for keeping ancient emblems of faith alive and for pluralism in a land of irony that has been home to multiple ancient faiths yet stands besieged by unpalatable extremism.

Excerpted from Historic Temples in Pakistan, A call to conscience by Reema Abbasi. with the kind courtesy of Niyogi Books, the publisher.

Please click NEXT to learn about five of the many ancient temples in Pakistan... 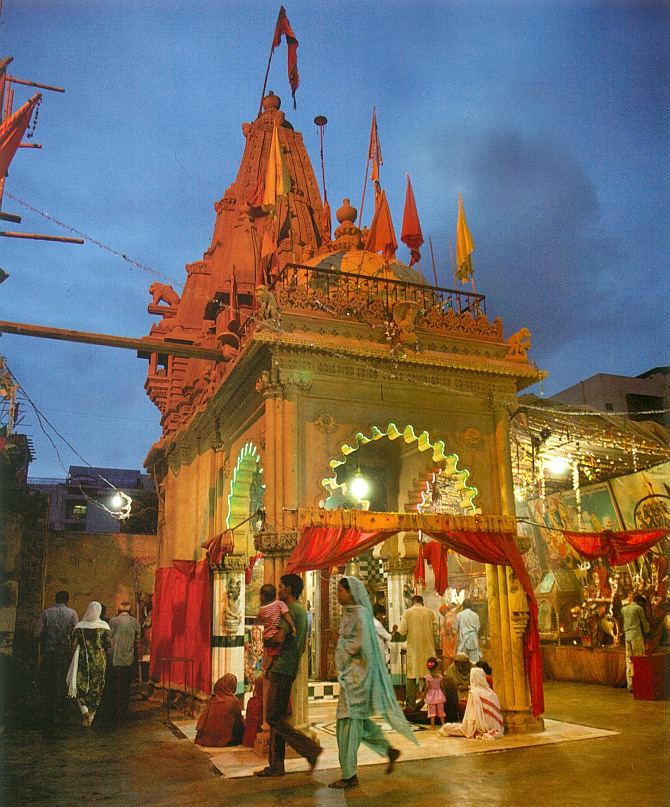 Reema Abbasi writes: “This temple is especially significant for Hindus, being perhaps the only shrine on the globe that houses a natural, non-manmade idol of Hanuman. The blue and white 8 ft statue was found many centuries ago at the place where the temple now stands; it bears all five aspects of the deity -- Hanuman, Narasimha, Adivaraha, Hayagriva and Garuda.

‘According to Ramnath Maharaj, the temple’s keeper, this is the sole temple, besides Shiva’s Katas Raj, that has a mention in Al-Baruni’s Kitab-ul-Hind. This was also the only Hindu site that remained untouched in the mayhem which followed the demolition of Babri Mosque in India.

‘In Hinduism, it is believed that such naturally-formed idols of deities possess exceptional power and appear to bless worshippers.

‘… Upon entering (the temple) one is struck by the intricately carved yellow stone structure in the middle of the temple premises -- an epicentre of lyrical buzz.

‘The small front porch has pillars of carved yellow stone on either side with a black and white marble floor; a wide passage for clockwise circumambulation (parikrama) runs around it. It is believed that completion of 108 rounds of the chambers cleanses all pain, evil and adversity, making this temple a citadel of healing for all castes and creed.’ 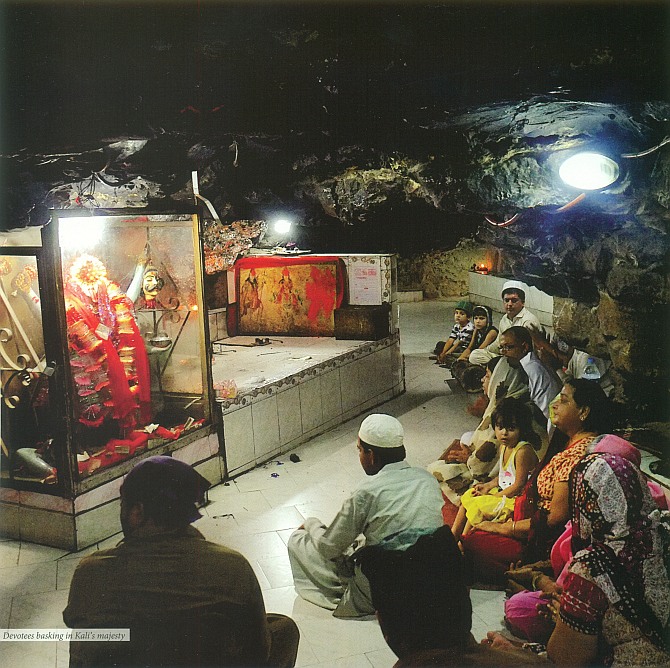 The author says: ‘Kalka Cave can be identified by a faint ancient imprint, believed to be an outline of south shasthi origin that signifies a goddess. At this door, it takes on the avatar of ‘Kalka’, meaning power. This is one of the holiest teeraths (pilgrimage site) in Hinduism as Hindus believe that Kali appeared here on her journey to Hinglaj (in Balochistan).

‘It attracts Hindus, Muslims and Christians from all over the subcontinent, who pay homage and participate in ceremonies. Most devotees come to Kalka on the night of the first Monday of each month and multitudes attend her annual festival in September.

‘Here, the age-old role of caves as crevices of immense sanctity for goddesses such as Kali becomes as apparent as an apparition. They are seen as reincarnations of the womb and are replicated in Hindu temples in the form of the womb chamber, wherein resides the primary deity.

‘There is a special aarti, the soup kitchen stays alive from 10 am to 8 pm as devotional songs ring out in her cavern, lit with diyas that cast shadows of pirouettes on stained surfaces, set to the beats of dhol and tabla. 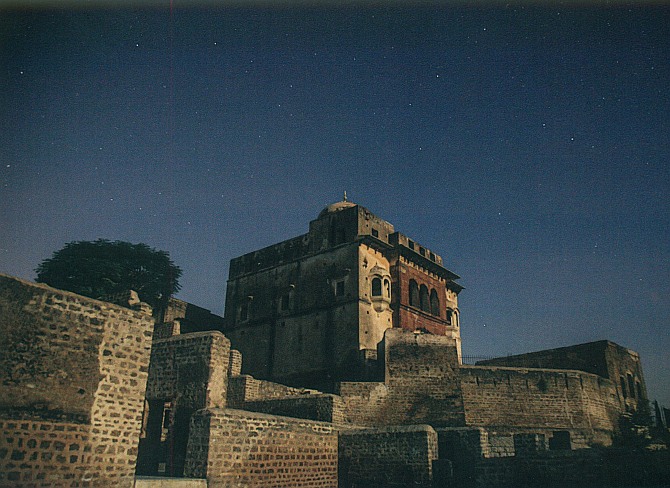 Image: The Katas site houses the Satgraha, a group of seven ancient temples, remains of a Buddhist stupa, a few medieval temples, havelis and some recently constructed temples, scattered around a pond considered holy by Hindus. Seen here are the Ramchandra and Hanuman temples surrounded by old plinths and ruins of Mahant Haveli.
Photographs: Courtesy Madiha Aijaz

The author says: ‘It takes a god to create Katas Raj -- an epochal epilogue of myth and antiquity that now disintegrates into an epitaph of its own glory. However, this sprawling elegy to sacredness has seen many Gaian (tyrannous) births, all imbued with marvel.

‘Earliest archaeological accounts record it as Ketaksha, Sanskrit for a ‘river of tears’. Hindus see it as Shiva’s land of birth where his beloved Sati breathed her last; the Mahabharata calls its stream ‘the pool of the universe’ and narrates that the inconsolable god wept here for his lost love, creating this vast pond and another in Pushkar, India.

‘Katas Raj is considered as one of the holiest sites in Hinduism for another reason -- it provided refuge to the Pandavas, the five heroes of Mahabharata, for four years of their exile.

‘Rig Veda, the oldest of Hindu scriptures, was put on paper here comprising 18 books, including the Mahabharata, which is the world’s lengthiest war poem and dates back to 300 BC; the time is contested by many scholars who say it was penned in 1300 BC.

‘… Katas Raj stands alone in majestic defiance of reason -- it is the closest one comes to believing that, perhaps, gods did walk the earth.' 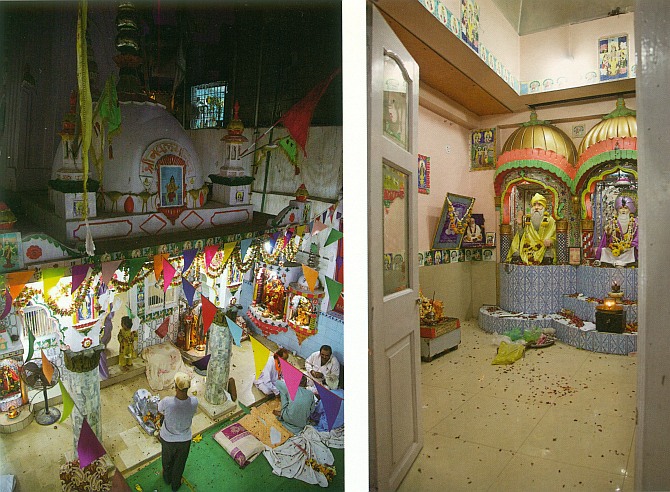 The author says: ‘Legend says that the shine brought the dead to life, cleansed hearts of hatred and homes and bodies of maligned spirits, was a shield for misdemeanours and led the wayward towards the virtue. At present, the temple is a refuge for travellers and the dispossessed.

‘Naval Mandir’s environs are Naval Para; its 200 sq yards have pale yellow stone walls, polished marble surfaces and clay statues of the foremost deities in niches and alcoves -- Santoshi Mata, Kali, Vishnu, Shiva, Ganesha, Hanuman, Guru Nanak and Rama Pir, with a white Nandi under a large brass bell in the centre of the small, pillared portico at the sanctum sanctorum.

‘Ranchore Lines transforms into another land during the festivals of Holi and Diwali. Its Holi ambience appears choreographed from the latest Bollywood blockbusters; all homes pour out into the streets in a vortex of songs, dance and colour.’ The author says: ‘Gor Khattree is a ‘Warrior’s Grave’; although there is not the faintest trace of a tombstone in its vicinity, its history of survival makes it a combatant at the very least. Perhaps the ultimate tribute to this citadel, now better known as the Gorakhnath Temple, came from Mughal Emperor Babur who mentions it in the first chapter of his renowned memoirs, Baburnama.

‘The present-day Gorakhnath Temple structure is admittedly one of the hardest to describe and also the most unusual of shrines. It is in the oldest and most elevated quarters of Peshawar, along an ancient trade corridor, as a square arrangement of rooms and chambers that can accommodate 500 people, a large rock well with a radious of five feet and two 600-year-old peepal trees.

‘Legend has it that Gorakhnath dove into the temple well for a bath and emerged from a pool at a distance of 15 kilometers called Gorakh Digi, now renamed Kushal Bagh.

‘The idol’s day is Tuesday when people gather in the evening for bhajans, recitation of the Gita, aarti and vegetable rice offerings. Devotees also offer sugar, flax seed, malt, mustard oil and milk to the sacred tree, tie threads and pray for removal of all hardship and unrest.’