Sign in  |  Create a Rediffmail account
Rediff.com  » News » One year on, Kedarnath yet to come to grips with tragedy

One year on, Kedarnath yet to come to grips with tragedy 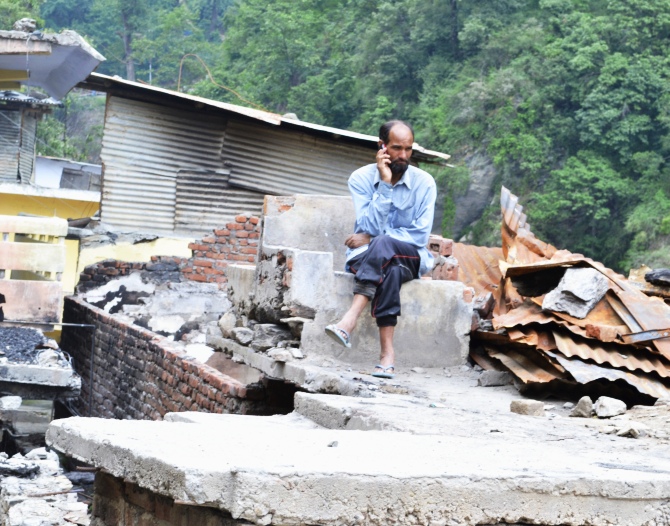 Image: A man sits at his damaged shop in Gauri Kund, the base camp for the trek to the Kedarnath temple in Uttarakhand
Photographs: Akash Bisht Akash Bisht in Kedarnath

A year since the flash floods laid waste to the region, Devbhoomi is still struggling with the aftershocks, reports Akash Bisht from Kedarnath.

It’s been a year since deadly flash floods struck the temple town of Kedarnath Valley in Uttarakhand and claimed thousands of lives and destroyed everything in their path. The locals are yet to recover from the tragedy that claimed their loved ones, and annihilated their only source of livelihood -- tourism. For the locals, this has been a year of mourning.

For now the locals in  Kedar Valley believe that the state government would take at least five years to restore the town to its old glory. But no one knows how long it would take before normalcy returns.

The fear of death lingers on in the air. Picturesque snow-clad mountains of Uttarakhand are no longer holiday or pilgrim destinations for the tourists who came in hordes to pay tribute to the venerated Hindu shrines spread across the region. The entire valley has turned into a cluster of ghost towns.

Every year, before the disaster, more than 20,000 devotees visited Kedarnath every day, and these very towns accommodated tourists, bringing jobs and prosperity in the region.

This year, though, these numbers have dwindled drastically (approximately only 500), leaving the economy in complete disarray. The markets are empty and reflect hopelessness and despair. Never before were the roads so quiet in this part of the region.

Not only tourists, locals too vow to never return to the temple town that saw such large scale destruction of life and property. This fear has created a huge existential crisis in the region, combined with the dip in the number of tourists, forcing them to look for other sources of income.

Kedarnath is crucial to the livelihood of the people from nearby villages who would earlier shift to the temple town during the peak tourist season to work as priests, hotel operators, mule owners or porters.

In Pithora village, a group of young boys, mostly unemployed, discuss work opportunities in the adjoining areas which they claim are few and hard to come by. They contemplate migrating to cities such as Dehradun and Delhi, like many others from adjoining villages have.

'Now I have no work, but I can't be sitting at home' 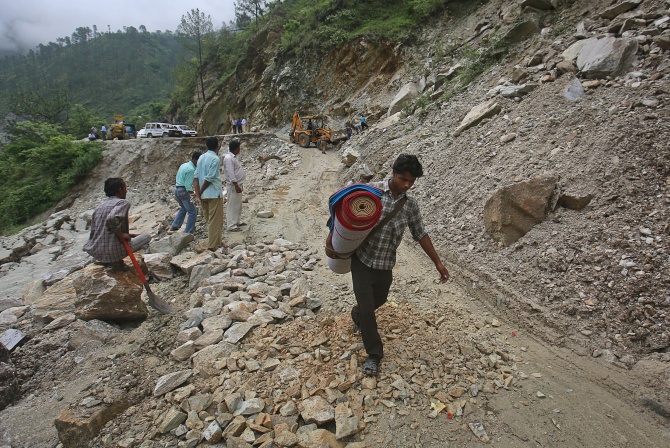 Image: A villager crosses a road damaged by a landslide due to heavy rainfall in Gauchar in Uttarakhand in this picture taken on June 25, 2013.
Photographs: Danish Siddiqui/Reuters

Until last year, these boys would carry devotees either on mules or on their backs to the temple to earn a living. The yatra season was enough to sustain their families for the rest of the year. With no work available, most of these boys sold off their mules at much lower prices to feed their families.

Consider this: three-fourth of the state population depends upon agriculture, which has registered a growth of a miniscule two per cent. The average landholding in the state is 0.68 hectare, which is extremely low for sustaining a family. Hence, tourism became the only viable option for the people to eke out a living.

Twenty-seven-year-old Rakesh Chandra from Pithora explains how crucial tourism is for their survival.

“I am a Bachelor of Arts graduate and also hold a degree in Bachelor of Education. When I couldn’t find a job, I carried people to Kedarnath, and the money was good. But now I have no work. I can’t be sitting at home; I will have to look at whatever options I have -- even migrate, like several of my other friends have,” he informs.

When asked what he thinks about going back to Kedarnath, he says, “If you had seen what we saw, you wouldn’t even ask such a question. I barely survived.”

According to him, people in the region were consumed by selfish desires and some of them even thought of themselves as gods. “There was a need to restore the balance,” he muses. He then points at a 2012 photograph of the Kedarnath shrine and shows how new buildings had almost concealed the temple.

“This was god’s way of ensuring that only the temple survives.” Many in the region believe the tragedy to be some form of divine intervention to stop the crass commercialisation and insatiable greed that has permeated through the lands of gods (Devbhoomi).

“The Devbhoomi has been reclaimed by the gods,” he adds.

'Lord Shiva has restored the order in Kedarnath' 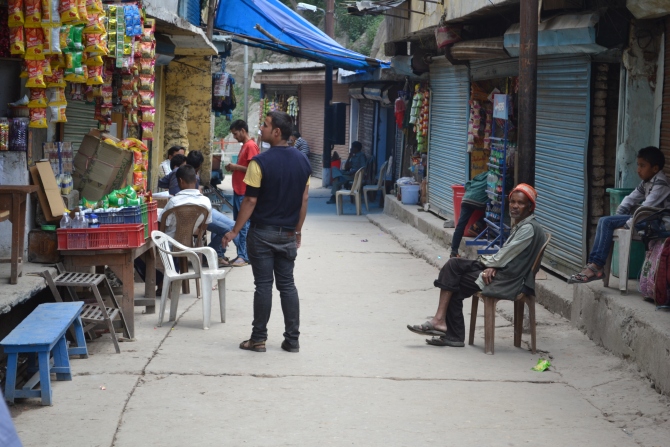 A priest who survived the deluge hiding inside the Kedarnath temple asks, “Everything else was washed away, but nothing happened to the temple. How is it even possible?”

For him, this was an act of Lord Shiva who symbolises destruction. He explains further, “Kedar Valley is Shiva’s abode and he is the god of destruction. If you remove the ‘i’, from Shiva, it becomes shav (a corpse). I always knew that a disaster was waiting to happen as the land of gods had turned into the land of greed. Shiva restored the order.”

Such theories may not hold much ground in a scientific discourse, of course.

“The region had never witnessed such rainfall and this triggered the flash floods that consumed most of the towns on the river bed,” says a geologist from the Wadia Institute of Geology, Dehradun. According to him, if the construction of hotels and lodges were done scientifically, the toll would have been much less.

“Last year 5.78 lakh tourists visited Kedarnath, which was five times higher than in 2003. This increasing tourist activity led to the mushrooming of hotels and lodges which eventually turned into death traps when the flash floods struck towns such as Rambada, Gaurikund and Sonprayag,” he claims.

A 2011 government figure puts the tourist numbers at a staggering 2.5 crore as opposed to the local population of just over one crore. With tourists now hard to find by, the locals are depending on the government to help them through this hour of crisis.

Though the government has been proactive in giving compensation to the families of the affected, it has proven ineffective in providing livelihood options for the locals. Even Uttarakhand Chief Minister Harish Rawat acknowledges that this is one area that needs to be looked at seriously and adds that until tourist activities are restored, there is no hope on the anvil.

He tells Rediff.com, “It is a major challenge before me and my government to restore the livelihood of the affected people. We will have to wait for the yatra to pick up pace; we have no alternative options.” 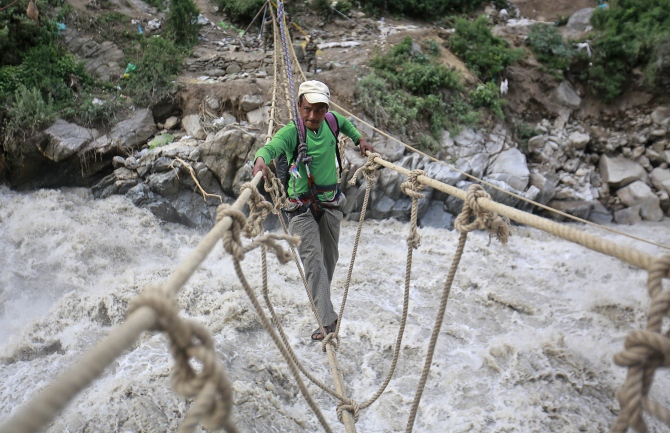 Image: A man crosses a rope bridge over the Alaknanda river during rescue operations in Govindghat in Uttarakhand in this photograph taken on June 23, 2013.
Photographs: Danish Siddiqui/Reuters

Since Rawat took over as the chief minister in February, the state has witnessed tremendous progress, and even the locals praise his efforts to restore normalcy and bring in a sense of safety for the tourists. Uttarakhand could be the only state in the country to see a revival of the Congress.

On the other hand, many villagers blame the government for making the reopening of these routes a prestige issue and not focussing on rehabilitating the affected. According to them, the focus had been on restoring connectivity rather than the people. Even top officials are of the opinion that undue haste was shown in making this area accessible to tourists.

“There are hundreds of highly-vulnerable landslide sites on these highways that are like ticking time-bombs waiting for the rains to unleash their fury. The risk factor is alarming, and yet it is all about keeping the routes open. One more tragedy and no one would ever visit the state again,” says a senior government official on the condition of anonymity.

The unprecedented rainfall last year led to massive landslides across the valley which further added to the misery of people affected. A continuous spell of heavy rains yet again can put the lives of tourists and others at risk, which the government has certainly overlooked. 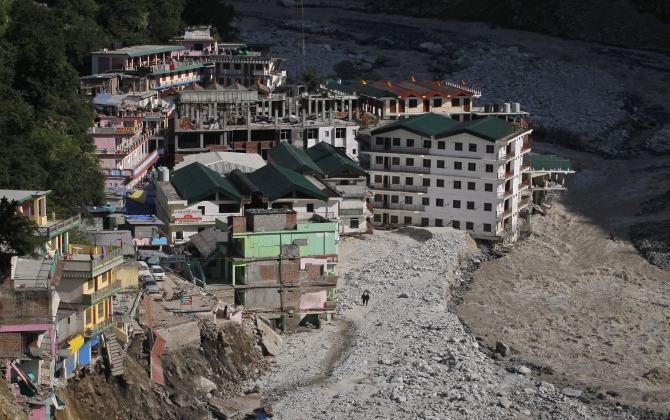 Image: Buildings destroyed during floods are seen next to the Alaknanda river in Govindghat in Uttarakhand in this photograph taken on June 22, 2013.
Photographs: Danish Siddiqui/Reuters

The Urgam Valley near Badrinath Valley is a case in point. After the flash floods last year, the valley was cut off from the rest of the region and it remained so for almost a year. The people had to take a longer and much treacherous route to reach the nearest town of Joshimath.

Every government official acknowledges their brave efforts in the hour of such tragedy. Apart from the relief, these agencies made interventions that were deeply appreciated by the locals. The worst-affected from this tragedy were children who lost their parents and saw the destruction of their homes and schools.

It was agencies such as Save the Children that set up child friendly spaces/ temporary learning centres in 118 villages, to ensure the safety and education of children. They even introduced a cash for work programme in several villages to provide a little monetary support to the community.

Despite support from the government and non-governmental organisations, the people in Kedar Valley are struggling to come to terms with the loss of lives and the devastation that followed. They are yet not certain of what the future holds for them.

The government has a difficult task at hand of ensuring harmony between scientific development and nature to avoid loss of lives of such magnitude again. If that happens, then man, rivers and gods can co-exist peacefully. If not, we are staring at yet another tragedy.