'India & Pak have done enough harm to each other' 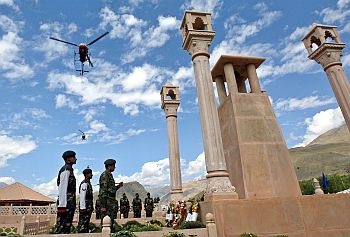 Pervez Musharraf, ex-military president of Pakistan, looks back on some high points such as Kargil and his own ouster in a talk with Karan Thapar on CNN-IBN's Devil's Advocate programme, to be telecast on Sunday. Edited excerpts:

In your memoirs, in the chapter on Kargil, in at least in two places you say that then Prime Minister Nawaz Sharif asked you for your advice whether he should declare a ceasefire, and on both the occasions you said to him that the decision was his. I quote what you write, "The military situation is favourable, the political decision has to be his". But if the military situation was genuinely favourable, then why didn't you say to him - "No Prime Minister, I am not for a ceasefire?"

I am a military commander and I gave the military picture entirely.

But you also said to him that it was his decision to decide on the ceasefire.

The military situation certainly was very favourable. Indians had moved all their forces against Kargil and there was weakness elsewhere. We knew what the Indian forces are capable (of) and what we are capable (of). I gave all that impression.

Assuming that's correct, why didn't you say to him, instead, "Look I have a very favourable military position, I am the army chief and my advice to you as my Prime Minister is, No, there shouldn't be a ceasefire". Why didn't you put it categorically?

Well, I put it very, very categorically and very clearly what the military position is, that it is favourable and there is no problem, in Kargil or in Kashmir or on the entire border. And that we were very capable of responding to any Indian action.

Reading that chapter, I get the impression of an army chief, who claims he has a favourable military position, who can achieve his targets and goals, and yet when the Prime Minister says he's considering a ceasefire, the army chief says, "Well, it's your decision, go ahead." That is like plucking defeat out of the jaws of victory.

Not at all. One is the ground military position, the other is there is a lot happening internationally. Internationally, there was the United States element - putting pressure on the government to stop or whatever. So, there was international pressure, US pressure and then the political situation. Whether the political situation was good enough to sustain that pressure...I therefore decided only to talk about the military (situation). That is all.

Kargil made India talk about Kashmir 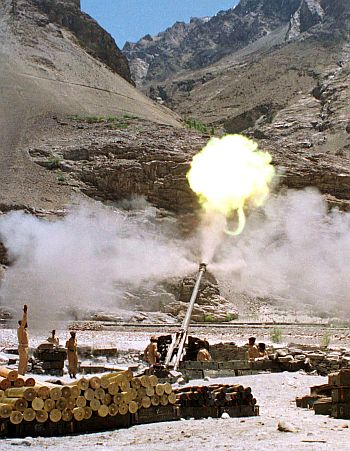 How did we start discussing the Kashmir dispute? How was it that the Indians came, that we will discuss Kashmir and there must be a negotiated settlement? Before this, there was no such thing at all. Kashmir couldn't be spoken. Kashmir must not be mentioned even in United Nation speeches by our leaders. This was the Indian stand. How did India come on the negotiating table on Kashmir?

So, Kargil changed the Indian attitude and response?

Yes, many things (did). Kargil, the Mujahideen activity, the Indo-Pakistan confrontation every time - all that, yes. All that compounded and I think the Indian leadership then perceived that Pakistan is beyond coercion. And, therefore, there has to be some political negotiated settlement of the dispute.

If you could relive 1999, knowing that Kargil ended up raising question marks about you personally, about your country, and perhaps Kargil represented one of the most serious downturns in India -Pakistan relations at that point, would you still repeat Kargil?

What happened when India came into Siachen, where was the downturn then? We don't think of that. What happened in 1971, when India was supporting Mukti Bahini in East Pakistan and made Bangladesh? So, lets close this chapter. We have to understand that Pakistan and India have all along been on a confrontationist course. We fought wars and we fought several actions. Our intelligence organisations are always confronting each other and do harm to each other.

We have to stop maligning each other. We have done enough harm to each other. If we want to go on the course of peace, we need to resolve disputes. Now that is where we stand and Pakistan has its own honour and dignity to be guarded. Where does the centre of power lie in Pakistan today - with the Presidency or Army Headquarters?

Centre of power is always with the government. It's a misperception that army keeps dictating terms to the government. The army does everything that the government tells them to do. It's only when Pakistan is at stake and Pakistan is suffering, then only (the) army comes in and tries to moderate or improve the situation.

At this moment, politically, indeed yes.

To what extent is his position weakened or diminished by the fact that increasingly people in Pakistan see the Prime Minister as a rival centre of power?

I would not like to comment on it. They have the Prime Minister and the President from the same party and I am not involved in their private differences.

What about the rivalry between Asif Zardari and Nawaz Sharif? Given that Pakistan's democracy is still fledgeling, is this a sign of health or is this rivalry a cause of concern?

And they are pulling in different directions? Is it de-stabilising the situation in Pakistan?

At this moment, Yes, because the focus ought to be on fighting terrorism and extremism and that requires total political will and political co-operation and co-operation between the federal government, the provincial government and the army.

'I don't run away from realities' 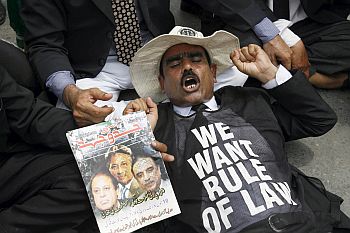 In this situation where the political parties clearly aren't together and their rivalry is destabilising the country, what are the chances of another military takeover?

Are you ruling it out?

That's a very interesting answer. I specifically asked, are you ruling it out, and you don't want to say that you are ruling it out!

No, no. Army has to ensure the integrity - territorial integrity and security of Pakistan. So, its entirely the army's decision and the Chief's decision. But (so far) they go along with the government. And I wouldn't like to comment. These are sensitive issues

When you resigned as President in August 2008, did you step down voluntarily or was there a sense in which you were pushed or eased out?

Well, a combination. The environment had become such that remaining a rubber stamp President, with nothing to do - literally - was absolutely counterproductive and the political situation was evolving in a manner that my continuation was amiss, was purposeless.

Now the chief justice you removed is back in the saddle. Doesn't that worry you?

One has to face realities on ground, and I'll face them.

So, you are aware that there could be trouble ahead, but you are going to face it?

Yeah. I am not a man who runs away from realities.

'Handling of the Chief Justice was shabby' 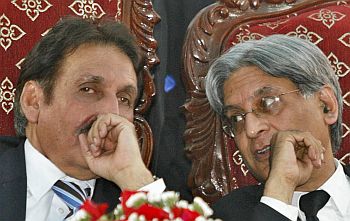 Two questions that always intrigue people. When one looks back at the cascading events that lead to your resignation, they all seem to have begun with the decision to dismiss the Chief Justice. Do you think in hindsight that was a mistake?

What happened after that was bad and that led to lot of turmoil in Pakistan, certainly. But if you say whether that was a mistake? No. I took action which was absolutely constitutional and legal. A reference coming to me through the ministry of law, through the Prime Minister - the President constitutionally is obliged to take action on it. And I took absolutely legal and constitutional action, when I forwarded it to the Supreme Judicial Council.

So, you stand by the decision to dismiss the Chief Justice?

Do you think even if the decision itself was correct, it could have been handled better?

Yes, the handling I would say was shabby. Handling of the Chief Justice was shabby.

Do you blame yourself?

No, I don't blame myself because I don't get into the nitty gritty of which Deputy Superintendent of Police was rude to him, some cars were taken or something of that sort. I am not passing such orders at all.

'There was an understanding with Benazir' 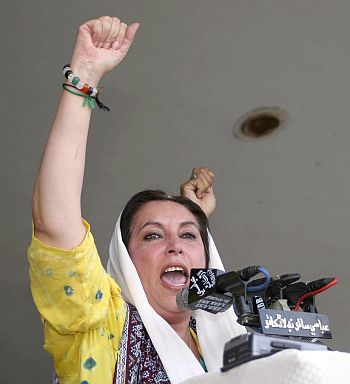 You think others should have handled it better, (that) the people who worked under you let you down?

A second question that intrigues people is, was there any understanding or agreement between you and Benazir Bhutto that facilitated her return in October 2007?

There was an understanding...I talked to her, yes. I had been talking with her twice. She was not supposed to come back before the elections.

If she had not broken that understanding and had fulfilled whatever terms and agreement you are hinting at you had with her, she would have lived?

I think so, absolutely.

If Benazir had lived to become Prime Minister again, would General Pervez Musharaf still be President of Pakistan?

I would have been, yes.