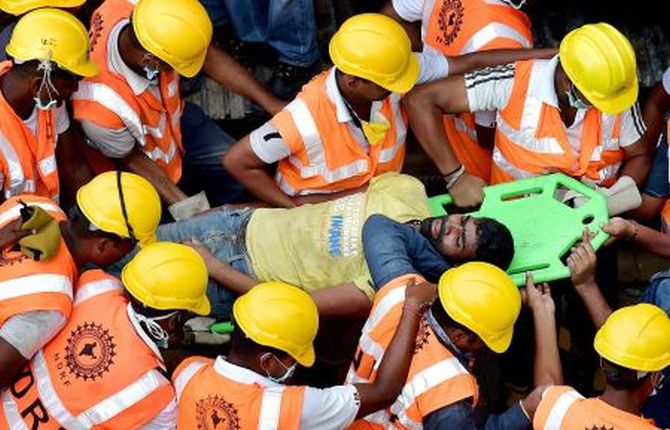 Image: NDRF authorities rescue a man from the debris of the building in Chennai
Photographs: PTI photo

A 28-year-old labourer from Odisha’s Kendrapara district had a providential escape from the claws of death in the Chennai building collapse, which claimed 61 lives.

The 11-storey housing complex in the Moulivakkam area in the suburbs of Chennai collapsed on Saturday.

Prakash Rout from Rajnagar area of the district escaped the clutches of death, but only after going through the nightmare of being trapped under the debris for 72 hours.

He was presumed dead in the building collapse and his relatives were plunged into mourning after being sent a body recovered from the site of the tragedy which was mistaken as being that of Prakash’s. They were about to cremate the body, which was badly mutilated, before the good news of Prakash’s survival came in. 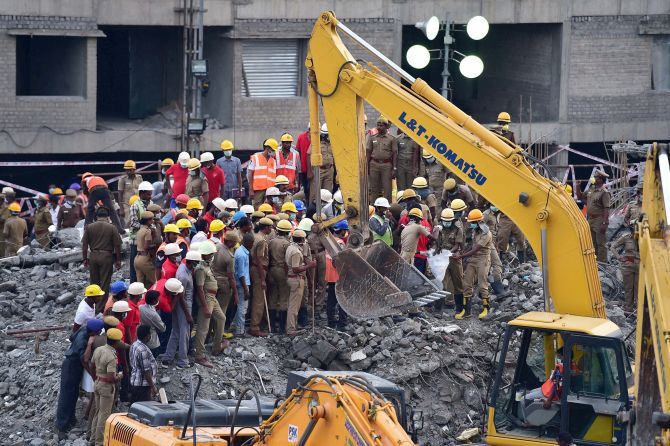 Rescue workers pulled out Prakash alive from the debris of the under-construction building a full 72 hours after its collapse.

Sukadev Rout, Prakash’s father, said, “I got a call on Sunday afternoon that my son was killed in the building collapse incident in Chennai. We were about to cremate the mutilated body which was handed over to us... We were about to put the body on the pyre at Swargadwar in Puri when Prakash made a call, much to our joy and ecstasy.”

Khirod Kumar Jena, chief of the Utkal association of Madras, said over phone that “A team of National Disaster Response Force rescued Prakash from the debris on Wednesday afternoon.” 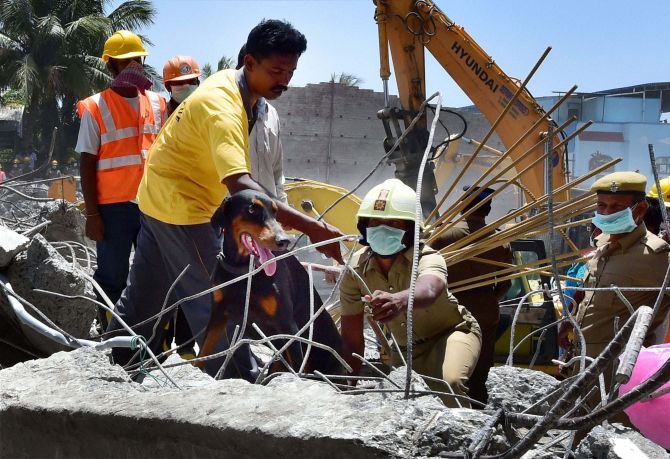 The NDRF team was alerted about Prakash trapped under the debris after sniffer dogs were pressed into the rescue effort. The team located the survivor and could get him out from under the debris, Jena said, adding that, “Prakash is fine. He will be returning to his village soon.”

Tapas Kumar Sahoo, Sarpanch of Balisahipatana Gram Panchayat, said, “Our joy knows no bounds after learning that Prakash is alive (but) we grieve for the death of another village youth, Amar Rout.”

Prakash, Gobind Dongri of Nawarangpur district and Pappa Rao of Gajapati district are now undergoing treatment in a hospital in Chennai, added Jena.

Tags: Sarpanch of Balisahipatana Gram Panchayat , Jena , NDRF , Pappa Rao of Gajapati , Kumar Sahoo
More
© Copyright 2022 PTI. All rights reserved. Republication or redistribution of PTI content, including by framing or similar means, is expressly prohibited without the prior written consent.
Print this
article