Sign in  |  Create a Rediffmail account
Rediff.com  » News » Why Jagan may give parties a run for their money in Andhra 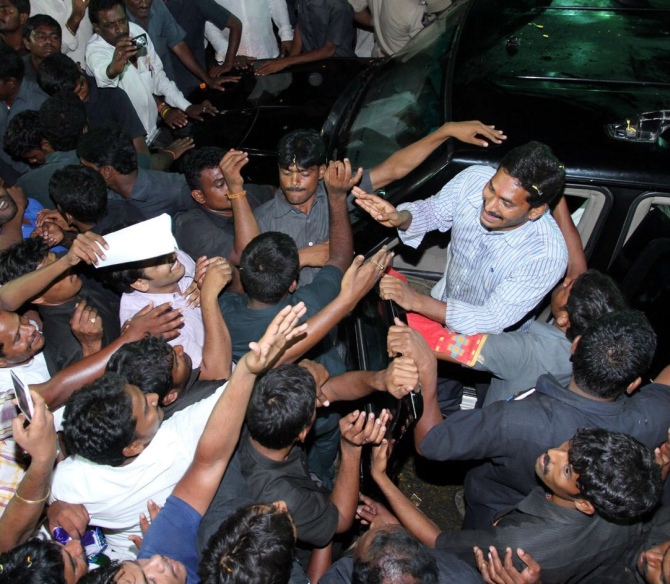 YSR Congress chief Jaganmohan Reddy is on a blazing campaign trail, much to the delight of the adulating crowds. There is a Jagan wave, but will he make the cut, asks Vicky Nanjappa

Many feel that he will be the first chief minister of Seemandhra and hence there is a keen interest in the region which only ensures that his rallies are jam-packed.

Jagan campaigns for more than 10 hours a day, giving the indication that he is a man on a mission.

Jagan launched his party after he fell out with Congress president Sonia Gandhi, following the death of his father, the late chief minister of Andhra Pradesh, Y Rajasekara Reddy. The Congress was shocked at the adulation the crowds gave him. The Congress was clearly losing ground in Andhra, and in a bid to safeguard at least one region in the state, it is alleged that the decision to carve out Telangana was taken.

Jagan has made the division of the state a major issue and makes a three-pronged attack during his rallies and interaction with the public. He speaks about the need for a united Andhra and narrates how the Congress treated him after his father’s death.

According to observers, he has everything going for him and his corruption cases are hardly an issue for the voter, as they all believe that he was targeted for not obeying Sonia.

To an observer, it is obvious that the people who come out to watch him compare him to his father who too was popular among the people. YSR was aggressive when he spoke and was extremely confident of everything that he said. 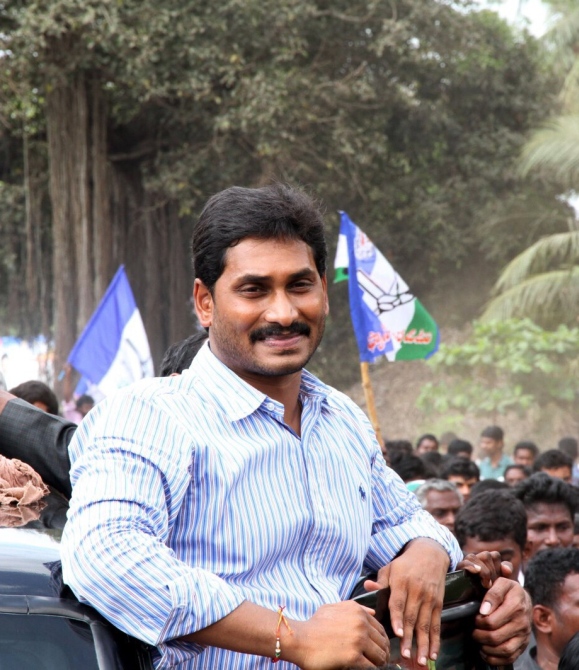 Such was his confidence that once when asked why it did not rain in Andhra, he famously said, “The rains will come don’t worry.” And it did. To another question as to why the Congress had not fielded any stars such as the rest of the parties, he had said, “Am I not enough? I am the star for the Congress.”

YSR addressed more rallies from open top vans or stages due to security concerns in 2009. However Jagan mingles more with the people. He is seen hugging, kissing and shaking hands with the crowd. He comes across as a very soft person when he is with the public, but then that is just public perception.

He is shrewd and has a dictatorial style of functioning and there is no word beyond his in party affairs, according to an insider. In fact, this is what many top officials from Seemandhra fear that in case he becomes the chief minister, he will want things done his way.

There have been several complaints within the party that he does not listen to anyone. The only other two persons who he does listen to are Vijayamma, his mother, and sister Sharmila, who are also campaigning extensively.

However, his party workers prefer living in fear over speaking up and quitting. This is largely to do with the fact that Jagan is a brand name. His candidates rely on him to win the elections. He reminds them of his father who would just pick up a bunch of candidates out of nowhere and ensure that they won the elections.

The number of first-time winners in the previous Congress government was quite large. Jagan, according to his party workers is capable of that and that somewhat explains the extreme level of obedience. 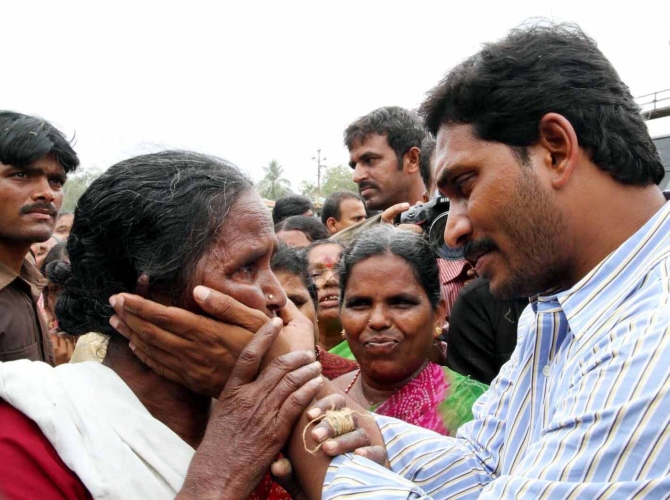 According to a source, it is rare to see him smile or crack a joke, when he is in office. However, he has a different avatar in public. He puts up a meek and docile face, which strikes a chord with the voter. He makes very humble appeals and tells the people, “I have inherited everything from my father. The most important thing that I have inherited from him is his credibility,” he emphasises.

He draws a lot of sympathy when he speaks about YSR. He tells the people how he was wronged by a party which his father had toiled for. He reminds the people that his mother and sister are also campaigning only for the people.

“Anna, why are you out here? WE will come to you!” the crowd immediately responds.

Jagan may have known all along that Andhra would be bifurcated. However according to the general perception, he did his best to prevent that, and Sonia is the ‘culprit’. Surprisingly enough, he still speaks at his rallies about a unified Andhra, and claims that the bifurcation can still be prevented.

Despite knowing fully well that he has no vote bank in Telangana, he still proposes to hold a rally there. His proposed rally at Kammam in Telangana would be more to show that he is speaking for a unified AP.

During his rallies in Seemandhra. he makes it a point to target Chandrababu Naidu and his Telegu Desam Party. He says that Naidu is not being realistic and should realise that he is out of the race already. 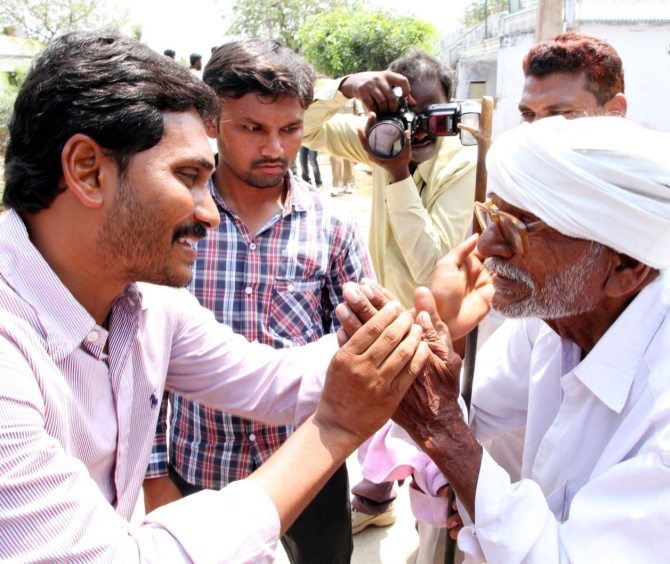 Jagan feels that the TDP may win just one seat and manage around 10 in the assembly segment. He is confident that his party will win more than 30 seats in the parliamentary segment and attain a thumping majority in the assembly elections.

Jagan relies a lot on the Reddys, the minorities and the Christians in Seemandhra. While he has his sympathy tactics to woo this section of the voters, he tells the middle-class voter about his fight for a united AP.

Jagan’s main focus would not only be the assembly elections. The results in the Lok Sabha segment are extremely important to him since he would want to be part of any government that is formed. He has praised the Bharatiya Janata Party’s prime ministerial candidate Narendra Modi; and he has met with Jayalalithaa and Mamata Banerjee.

Some would even indicate that in case the Congress were to come to power, there is a good chance of him giving support to them too, although this is not something he speaks about in the open. For Jagan, being part of the Central government is crucial as many would say that it would make easier for him get his numerous cases quashed.

However, Jagan would ideally prefer to be part of a Third Front government, as it would suit him the most. He portrays a secular image and this could be lost if he goes with the BJP. In case he supports the Congress, then it would be seen as a betrayal to the voter. Being part of a Third Front would solve both these problems for him.

At present, Jagan has everything going for him. His promises such as fee reimbursement to students, increased old age pension and four per cent reservation for minorities are all a hit with the public.

So will he be the first chief minister of Seema-Andhra and will he have a say at the Centre?

Currently all the odds are in his favour.