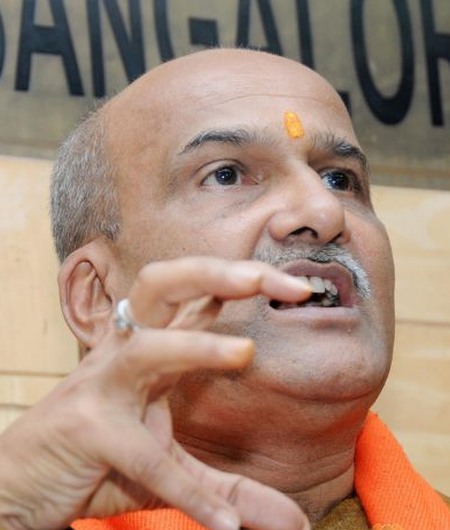 It was a drama that played out for five hours. In this duration, Pramod Muthalik, controversial leader of the right-wing outfit Sri Ram Sena, -- linked with the attack on women at a pub in Mangalore in 2009 -- was in and out of the Bharatiya Janata Party.

At around 11 am on Sunday, a message from the BJP sent out to journalists read, ‘Pramod Muthalik will join the BJP in the presence of (state party president) Prahlad Joshi and (former chief minister) Jagadish Shettar.’

The event went through and Muthalik along with Joshi, Shettar and K S Eshwarappa exchanged sweets while posing for the press.

This led to a major outburst on the social media. On social networking website Twitter, several messages were marked directly to BJP’s prime ministerial candidate Narendra Modi requesting him to intervene and cancel Muthalik’s membership.

Then around 6 pm, the BJP issued another statement.

It read, ‘Due to various reasons induction of Pramod Muthalik has been set aside under the central party direction by state president Prahlad Joshi.’

This brings us to the question as to who exactly was behind the decision to induct Muthalik? 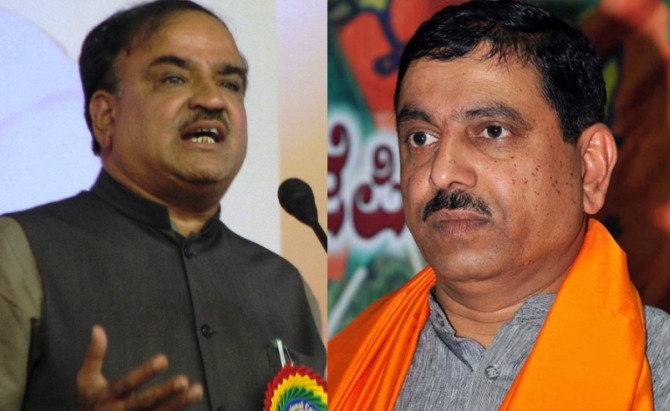 The Karnataka unit of BJP usually does not induct members into the party without the approval of the central leadership. In Muthalik’s case, they would have taken extra precaution considering how controversial the Sri Ram Sene chief is.

Speaking to a cross section of BJP members, rediff.com has learnt that in Muthalik’s case, the state unit chose not to consult the central leadership.

BJP sources say that Prahlad Joshi took the decision in consultation with Bangalore South MP and national general secretary Ananth Kumar. However, the Ananth Kumar camp was quick to deny this.

The real reason, BJP sources say, is that Muthalik was threatening to eat into the vote share of Prahlad Joshi in the Hubli-Dharwad region.

Joshi, the sitting MP from this region, is relying a lot on the Hindu votes and Muthalik had threatened to contest against him.

Muthalik had announced publicly that the he would teach the BJP a lesson for going soft on the Hindutva issue. At first he had sought a BJP ticket from Belgaum North, but was denied the same. He then decided to contest alone from Hubli-Dharwad and chant the Hindutva card and there was a good chance that he would have earned some votes.

A worried Joshi thought that the best option was to have Muthalik in the party and ensure that he campaigns for him, the sources say. 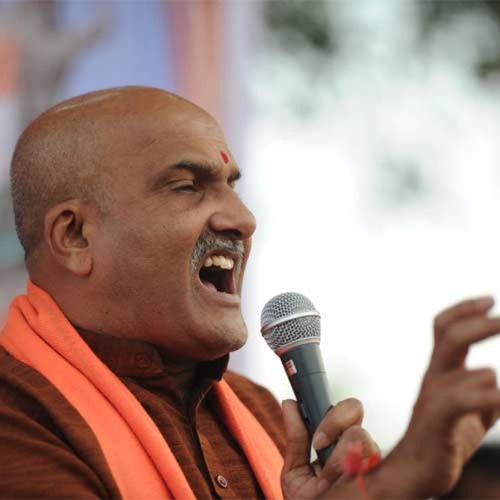 Sources add that the state unit felt that they were just inducting Muthalik into the party and not handing out a ticket. This, they felt, would be accepted by the central leadership, but things did not work out for a few in the BJP’s state unit.

There are also rumours that this could have well been a ploy to embarrass the party’s prime ministerial candidate.

Bringing in Muthalik would mean communalising the election scene and this would go diagonally opposite to Modi’s development mantra during his election campaign, party sources say.

The state BJP, however, rubbishes this allegation.

Meanwhile, the Muthalik camp has been mum on the issue.