Hope in the time of Modi in Ayodhya 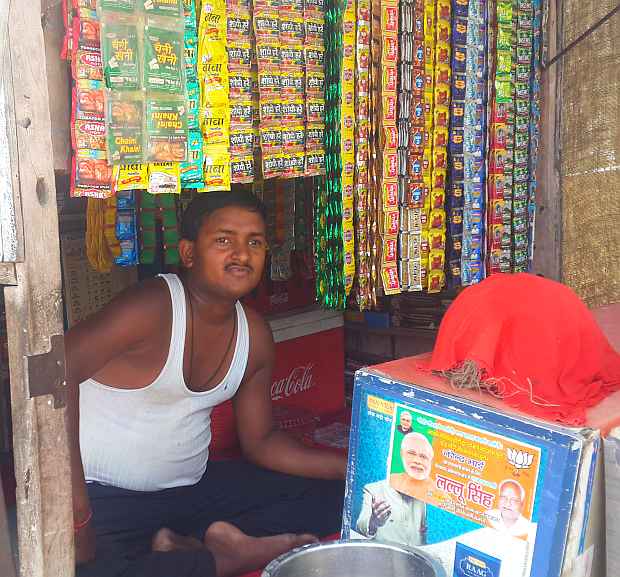 The realities at the nerve centre of the Ram Janambhoomi movement are lack of development, rampant unemployment and 12 hour-long power cuts. Most residents hope Narendra Modi will change the situation in Ayodhya.

Badal Kumar Soni, 23, is busy attending to customers at his paan shop on the banks of the Sarayu river in Ayodhya. A poster of Narendra Modi in his shop makes it anybody's guess where his support lies in this election.

"I am jobless," Badal says, "I am a BSc and had to become a paanwallah to support my family."

He is very optimistic that his life will change if Modi becomes prime minister.

"I was very optimistic about Akhilesh Yadav, but he did nothing for Uttar Pradesh after becoming chief minister. He is just not bothered about the youth. I am hopeful about Modiji, that he will change my life."

After his graduation two years ago, Badal applied for a job to almost every government department, in vain.

'In UP every youngster applies for a job, but nobody gets a reply' 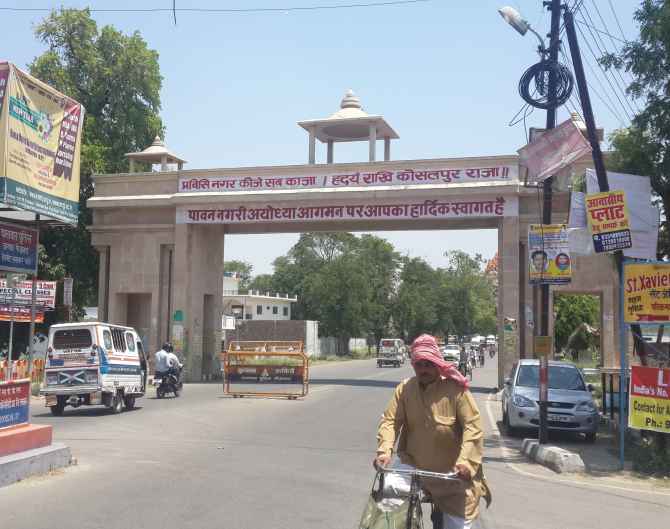 "In UP," says Badal, "every youngster applies for a job, but nobody gets reply to their applications. The ministers and babus (bureaucrats) corner the jobs for their candidates as soon as it is available. They issue advertisements in the newspapers as a formality. I expect these things to change once Modi comes to power."

"I help my father to run this shop. We earn around Rs 150 per day. I don't know what do if I don't work as a paanwallah because there are no jobs available," he says.

"There are no factories in Ayodhya. I have no option, but to sell paan. I feel my situation will change when Modi comes to power."

Badal is the eldest among four siblings and feels it is his duty as the eldest son to take care of the family.

"Modiji will create jobs by building factories," Badal says when I ask if he is not overtly optimistic that Modi will usher in such sweeping change, "and I will be employed somewhere. Till that time I am not even getting married. I am standing on one leg today. The day I get a job in one of the factories I will stand on both legs and then get married."

'There's no point distributing laptops when there's no electricity' 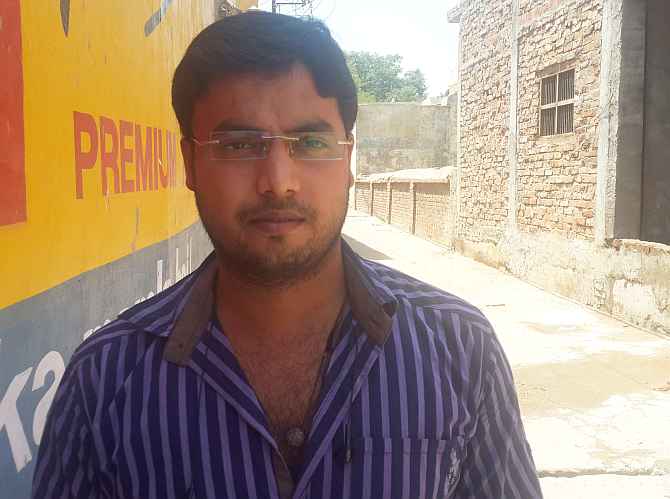 Image: Amit Kashyap feels the Samajwadi Party government should give jobs to the youth instead of laptops.
Photographs: Asif Ansari Syed Firdaus Ashraf/Rediff.com

Five hundred metres away from Soni's paan shop lies the Ramjanambhoomi site. A group of youngsters are chatting at a small shop selling cell phones.

Like Badal, they have one grudge against the establishment -- no jobs. "Apply Apply, no Reply," they say.

Amit Kashyap, 23, works in a private firm after completing his Bachelor's in Business Administration and earns Rs 5,000 a month. He is a hardcore supporter of Narendra Modi.

How will your condition change once Modi comes to power, I ask Amit, to which he replies sharply, "Aane ke baad? Woh aa chuke hain, woh Bharat ke pradhan mantri ban chuke hain.. ab toh sirf formalities baaki hain. (What do you mean after he comes to power? He has already come to power. It is only a formality that he has to be sworn in as prime minister)."

"You just wait and see, he will change the face of India like no one has done ever before," declares Amit.

Amit is disillusioned with the Akhilesh Yadav government on whom he was banking big time when he was voted to power in May 2012.

"Akhilesh is distributing free laptops to students. What is the point in distributing laptops when there is no electricity? There is a 12 hour power cut in Ayodhya daily. I want to tell Akhilesh give youngster jobs instead and they will buy their own laptops."

The Samajwadi Party has distributed 500,000 laptops across Uttar Pradesh so far at a cost of Rs 900 crore (Rs 9 billion).

'Modiji will build the Ram temple in 24 hours' 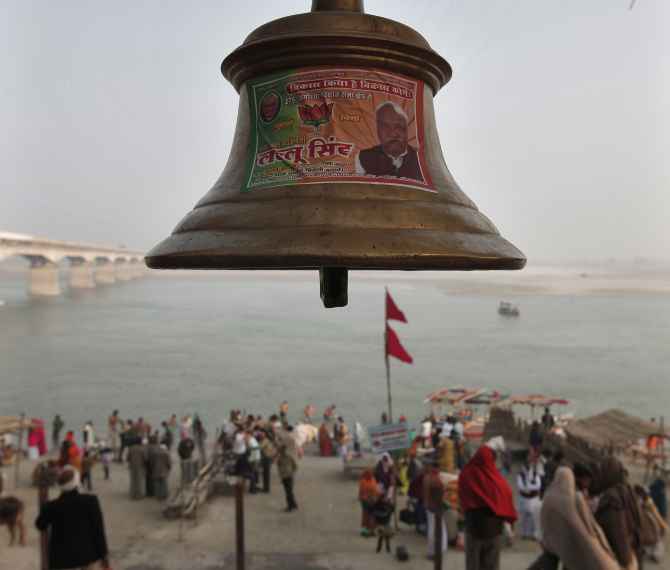 Image: A temple bell pasted with a pamphlet of the BJP candidate is seen on the banks of the Sarayu in Ayodhya.
Photographs: Adnan Abidi/Reuters Syed Firdaus Ashraf/Rediff.com

"He is the only one who can find a solution to the Ram Janambhoomi-Babri Masjid issue," feels Rishabh.

Abhay Raj Singh intervenes in the conversation, saying "Modiji will build a Ram temple in 24 hours from the time he gets an absolute majority in Parliament."

Asked how Modi would achieve that, Abhay responds, "When Kalyan Singh (the BJP chief minister on December 6, 1992 when the Babri Masjid in Ayodhya was demolished) can destroy the Babri Masjid in 24 hours, why can't Narendra Modi construct the Ram temple in 24 hours? He will cordon off this place with the army and police and people will construct it."

The Ram Janambhoomi issue revived the BJP's electoral fortunes after it was reduced to just 2 Lok Sabha seats in the 1984 Lok Sabha election.

The BJP won the Faizabad Lok Sabha seat -- under which Ayodhya falls -- thrice after the 1989 general election. The constituency was won by the Samajwadi Party's Mitrasen Yadav in 1998 and 2004.

After 20 years, in the 2009 election, Congress candidate Nirmal Khatri won back the seat, defeating Mitrasen Yadav by 54,228 votes.

The BJP candidate did not even come second.

Khatri's 2014 rivals are Lallu Singh of the BJP, Mitrasen Yadav of the Samajwadi Party and Jitendra Kumar Singh of the Bahujan Samaj Party.

'Ayodhya is a place for poor people' 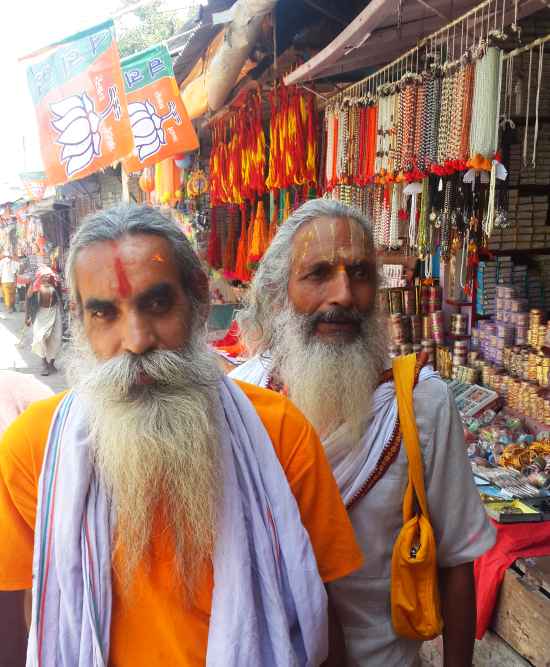 Poor children run after visitors offering their services as tour guides. They offer their knowledge of the holy town for Rs 10, but will halve the rate soon enough. The kids guide you to the Ram idol and also tell you about the history of different akharas in Ayodhya.

Asked why Ayodhya is so unclean, Shyam Babu, a sweet-maker, says, "Ayodhya is not like the Vatican. It can never reach those standards of cleanliness. People pay lakhs to travel to the Vatican, but you can visit Ayodhya with just Rs 100 in your pocket and stay in any of the dharamshalas. Ayodhya is for poor people."

"Unfortunately," he adds, "hundreds of crores of rupees were collected in the name of the Ram Janambhoomi, but nothing reached Ayodhya and none of the locals benefited from the movement."

"We find ourselves in trouble whenever outsiders hold a rally in Ayodhya. Nobody supplies any goods to Ayodhya because they always fear that there will be a riot. We go through very difficult times when the political situation in the country is unstable because of Ayodhya," adds Shyam.

"Gandhiji liberated India from the British. He was a Gujarati. In the same way," says Harinarayan Das, a sadhu, "Narendra Modi, a Gujarati, will take India to greater heights once he comes to power."