IMAGES: Kashmir's forgotten other half 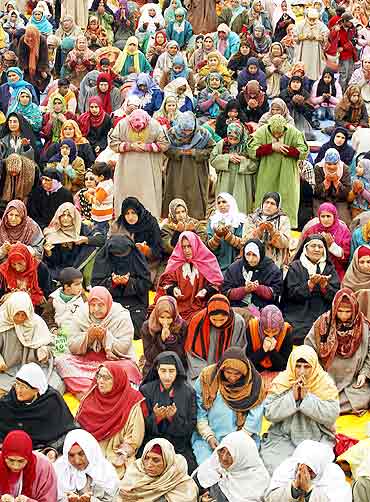 Many aspects of normal civilian life are compromised in Kashmir, as in any area of conflict.  But in Kashmir, there is an overlay of this reality with another one; of women being treated with insensitivity, and in extreme cases -- violence.

There is an inherited tapestry of Kashmir's societal norms which are discriminatory, that are then exacerbated by the over two decades of conflict.

The problem is deep-rooted and pervasive.  Social prejudices reinforce the woman's identity as being subordinate to the male.  Domestic violence is more widespread than is reported. Dowry is an ugly reality with ceaseless demands leading to a high degree of stress. 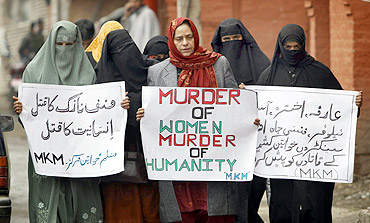 According to Dr Mushtaq Margoob, a well-known psychiatrist in the Valley, "Women's physical and mental health is often permanently damaged or impaired. In some cases there can be fatal consequences as in the case of dowry deaths."

The Kashmir region has witnessed tremendous changes with the processes of industrialisation and modernisation ushering in enhanced levels of economic prosperity and education.

The traditional role of women in society has also changed but it has also brought about new areas of stress within the old mould.

It is not always easy to discern how the existing patterns of societal norms and attitudes towards women reach a point of conflagration but they feed each other.  A woman who has been abused either at home or has been a victim of attack, molestation or rape by any of the players operating in the conflict zone finds it difficult to register her complaint with the authorities. 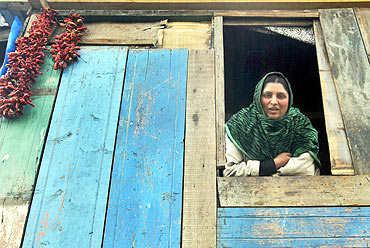 Image: A Kashmiri woman at the window of her makeshift home on the banks of Jhelum river in Srinagar
Photographs: Fayaz Kabli/Reuters

She finds very little support from the family or society and often carries a stigma for a wrong that has been done to her.

Minister for Social Welfare Sakina Itoo agrees with this view and holds the police accountable for negligence in registering their complaints.

"Hundreds of women have informed me that the police refuse to register their complaints of domestic violence," states Itoo.

The environment for women in Kashmir is far from conducive and the fall-out of the conflict has taken a huge toll not only on the physical security of women but their psychological well-being and mental peace. 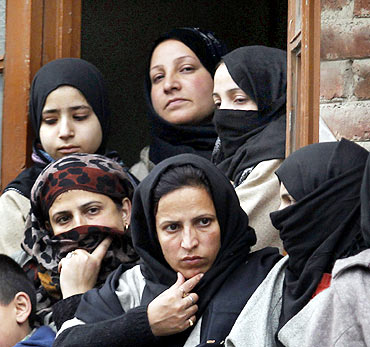 People anywhere in the world exposed to benumbing violence in any situation of armed conflict are prone to developing psychological disorders and this is equally true for Kashmir where the incidence of Post Traumatic Stress Disorders has grown.

According to Dr Margoob, "Women constitute more than 55 per cent of the patients seeking treatment at Kashmir's only mental health hospital in Srinagar.  Most are suffering from PTSD."

Margoob says women are more prone to PTSD than men. Whether this is a reflection of the odds stacked against them or their coping mechanisms can be debated but there are no simple answers.

'They continue to suffer silently' 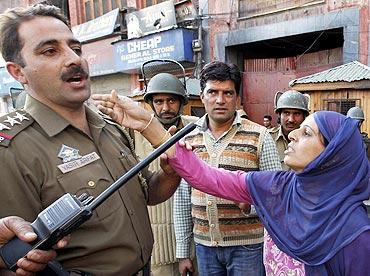 Image: A Kashmiri woman pleads with a police officer to release her relative detained during an anti-India protest in Srinagar
Photographs: Fayaz Kabli/Reuters

The atmosphere of conflict pervades all of society. Within that, what do women endure, what are the points of breakdown, what are the underlying and immediately provocative factors which lead to their suffering and their marginalisation? The answers need to be urgently sought.

Margoob believes that hundreds of women do not approach medical help because of illiteracy and social taboos attached to the mental health hospitals. "They continue to suffer silently," he says.

Abdul Rashid Hanjoora, a committed social activist, says, "Women are often caught in a vicious circle of economic dependence, a sense of insecurity, a lack of awareness about their rights"

'Degradation of women should be stopped' 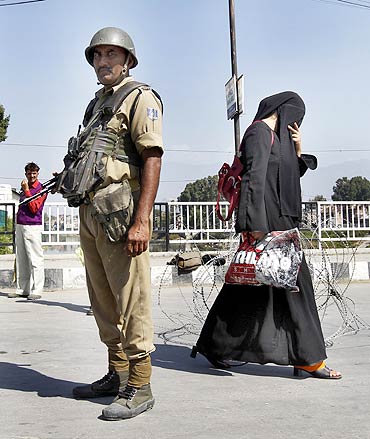 Image: A Kashmiri woman walks past a policeman standing guard at a barricade during a curfew in Srinagar
Photographs: Fayaz Kabli/Reuters

These factors effectively keep a woman trapped in circumstances that maybe harmful to her physical or mental health but the shroud of privacy or so-called sanctity of a home often stops outside agencies from knowing,  let alone acting upon her problem.

Hanjoora also reiterates the belief that social stigma prevents many cases of domestic violence being reported thus giving a false picture of the situation.

He says "We need to ponder on how the degradation of women can be stopped. It needs support from all quarters, be it government, NGOs and women themselves."

Violence against women gets least attention 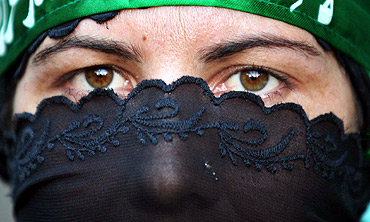 A sign of hope is that the police acknowledge that violence against women gets 'least' attention and are trying to correct its image by taking firm action.

According to Jammu and Kashmir police chief Khuldeep Khoda "We are aware about most cases not getting registered in police stations, not only because our administration mechanism is weak but other reasons as well."

"In order to control crime against women, we have established two women police stations -- one in Jammu and another in Kashmir, exclusively headed by women officers. These have helped police a lot in controlling the crimes against women. Our target is to establish women's police stations at all district headquarters of J&K," says Khoda.