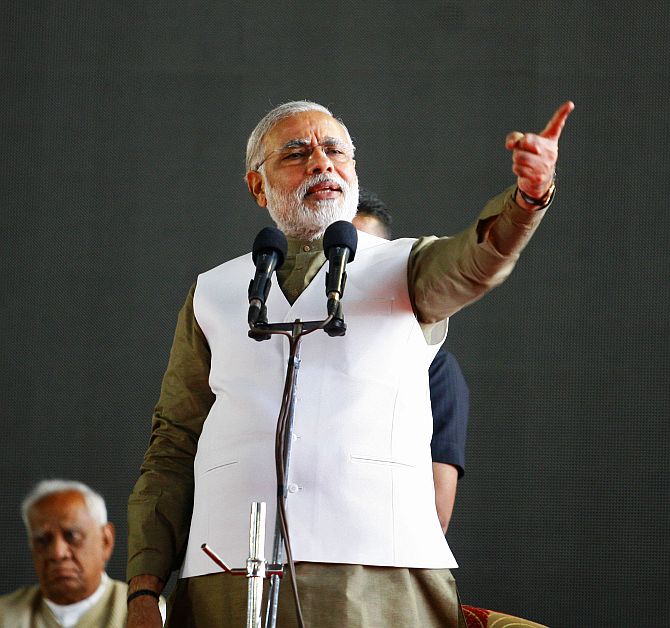 ‘Who set fire to the Sabarmati Express?

‘The Modi ‘action reaction’ interview that was never given.

‘The truth about the interview in CM’s residence”.

I was invited on January 4 to Pune for the launch of the Marathi edition of the book "Modinama” written by Madhu Purnima Kishwar, an academic and activist. Madhu has never been a Bharatiya Janata Party supporter. If at all I remember her as a critic of the party on several occasions in the past.

The English and Hindi edition of the book are yet to be released. The Marathi edition has been printed by Vineet Kuber of Pune. The book is based on several months of research by the author.

In relation to the 2002 riots she has recorded interviews of several people and has based the book on the factual impressions that she got. While speaking at the launch function, I referred to several steps taken towards a sustained campaign (or conspiracy) to implicate Narendra Modi in the 2002 riots. I further explained some of these attempts which collapsed because they were based on falsehood.

I refer to three important facts that I mentioned in my speech.

Firstly, who set fire to the Sabarmati Express? 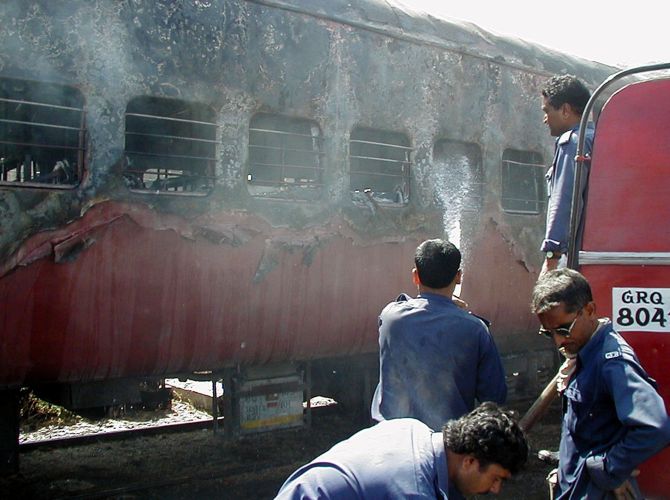 Image: A fraudulent attempt was made to allege that nobody set the fire on Sabarmati Express from outside; that the fire started inside the compartment, notes Jaitely
Photographs: Amit Dave/Reuters

It was clear from day one that a misguided mob at the Godhra railway station, of members belonging to one community had set the Sabarmati Express compartment No S-6 on fire. The case was initially investigated by the Gujarat Police and subsequently transferred by the Supreme Court to the Special Investigation Team.

The trial was completed based on the SIT’s investigation which established that a meeting was held in Godhra a day prior to the incident. Fuel was transported in vehicles to the railway station. The doors of compartment S-6 were bolted from outside so that nobody could come out and the mob armed with weapons had set the compartment on fire.

A fraudulent attempt was made by a section of the media and certain NGOs to allege that nobody set the fire from outside; that the fire started inside the compartment. The trial upon completion resulted in conviction of a large number of people against whom the charge of conspiracy, rioting and murder was held.

The appeals of the convicted persons are pending. Notwithstanding this voluminous evidence, UPA-I through its Railway Minister Lalu Yadav appointed a committee under the railway ministry headed by a retired judge, Justice U C Banerjee.

The committee came out with a scandalous report alleging that the fire could have started inside the compartment. This report carried no credibility with the people and has been consigned to the dustbin. The judicial verdict proved every fact of this report to be false.

The motivation of this false campaign was established that the Hindu community had set the compartment on fire so that the provocation could lead to riots in Gujarat.

Secondly, the Modi interview of action-reaction which was never given 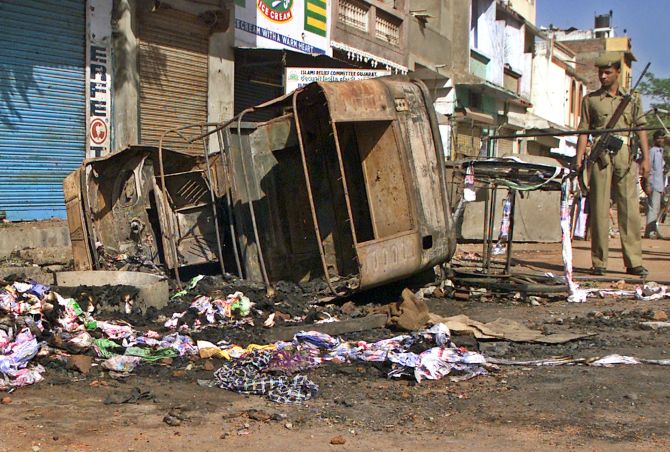 Image: A paramilitary trooper stands near a damaged a vehicle during the post Godhra riots, in Ahmedabad
Photographs: Amit Dave/Reuters

In order to establish that Narendra Modi was rationalising the violence taking place in Gujarat, a leading national newspaper in the first week of March 2002 published an alleged ‘interview’ of Modi. The said interview quoted Modi as saying that every action has a reaction and therefore the post-Godhra violence was justified as a reaction.

Narendra Modi maintained that he had not given any such interview. In fact no reporter from the newspaper had ever met him for the interview. It was therefore surprising that the interview could appear in Question-Answer form and create an impression that Modi had justified the violence.

The Gujarat government wrote to the newspaper alleging that no such interview had been given since nobody from the newspaper had ever met the chief minister. The statement was not published in the next 20 days. Thereafter, it appeared as a letter in the Letters to Editor column with a clarification that in fact no reporter had met Modi or had interviewed him and the interview was ‘created’ on basis of comments and replies of the chief minister which had appeared on certain electronic channel.

Thirdly, the meeting at chief minister's house on February 27, 2002 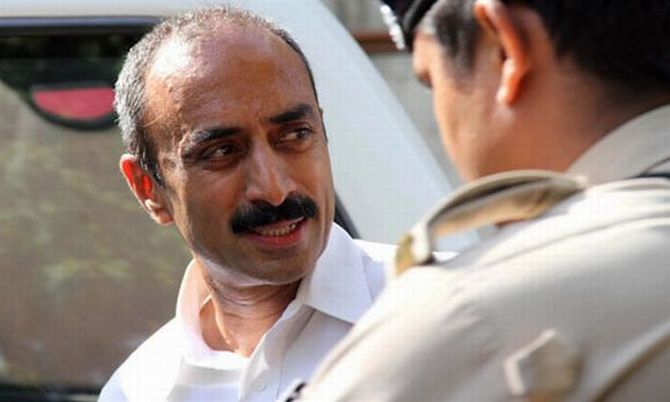 Image: The SIT concluded that Sanjeev Bhat was not present in the meeting, notes Jaitley
Photographs: Amit Dave/Reuters

This was the third limb of the falsehood on basis of which the allegation against Narendra Modi was made. A meeting attended by the then chief secretary, the DGP, the principal secretary (home), etc and other senior officers was held at the CM’s residence. There were eight senior-most officers of the state government and the police. There was no occasion for a SP level officer Sanjeev Bhat to be present in the meeting.

For the first time in 2006, the complainant Zakia Jaffrey, alleged that in the said meeting Narendra Modi had told the officers that the Hindu community must be allowed to exhaust its anger. The CM denied that he had made any such statement.

On the contrary, stringent steps were planned to ensure that no violence takes place. Contemporaneous statements appealing for peace and against any form of retaliatory violence were also issued by the chief minister. Eight years after the alleged meeting Sanjeev Bhat alleged that he was present in the meeting where such a provocative statement was made.

These included the call data records which could establish the movement of a person. Further evidence was available of how NGOs, activists and even the Pradesh Congress Committee persons were being consulted on the draft affidavit to be presented in support of the allegation and a conspiracy to destabilise the state government was being undertaken.

The above three steps had subverted the media debate for almost a decade. It certainly calls for introspection of those who either perpetuated this falsehood or became victims of this propaganda.

I have always believed that falsehood falls apart and truth holds together. There can hardly be a better illustration to substantiate this belief than what is stated above.