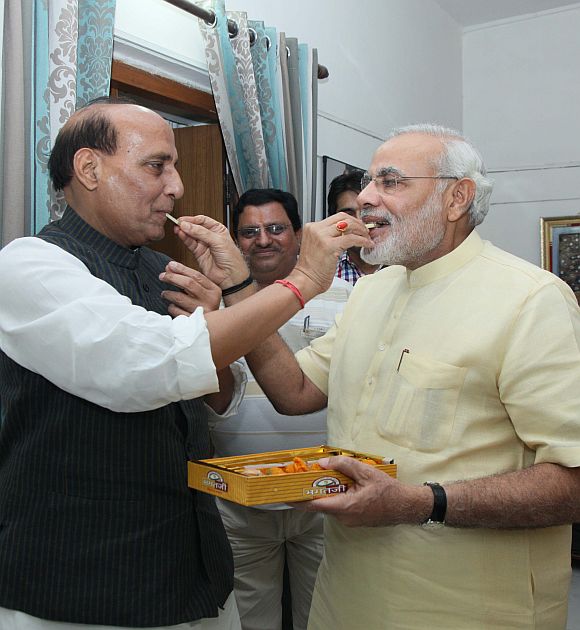 Brushing aside reservations of patriarch L K Advani and some other senior leaders, the Bharatiya Janata Party on Sunday anointed Narendra Modi as chairman of its election campaign committee for the 2914 polls, a move considered just short of making him the prime ministerial candidate.

"I want to give you significant information. I have announced (at the National Executive) that Gujarat Chief Minister Narendra Modi as chairman of the BJP election campaign Committee, keeping in mind the challenge of the 2014 Lok Sabha elections and to achieve victory in the polls," party President Rajnath Singh told the media at the conclusion of its 2-day deliberations.

The announcement was made in a terse statement by Singh who was flanked by Leaders of Opposition in Parliament Sushma Swaraj and Arun Jaitley, former President M Venkaiah Naidu, General Secretary Ananth Kumar among others.

No questions were taken at the media interaction. 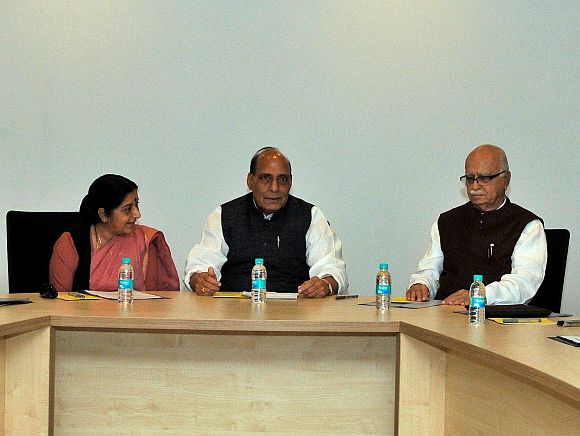 "Whatever has happened has happened on the basis of consensus," Singh said without elaborating.  The decision to appoint 63-year-old Modi came against the backdrop of Advani, who is said to be strongly opposed to the elevation of Modi, keeping away from the meeting.

Several other leaders including Jaswant Singh, Yashwant Sinha, Uma Bharati and Shatrughan Sinha, who are also said to be reportedly having reservations on Modi's elevation, also kept away from the Executive meeting.

After two days of deliberations and dilemma, the party appears to have taken the plunge by plumping for Modi in a crucial role, ignoring reservations from leaders like Advani, the tallest leader after Atal Bihari Vajpayee.

"We are absolutely sure that the Congress-led UPA government has lost the confidence of the people and are confident that the BJP will be voted to power in the 2014 elections," he said. 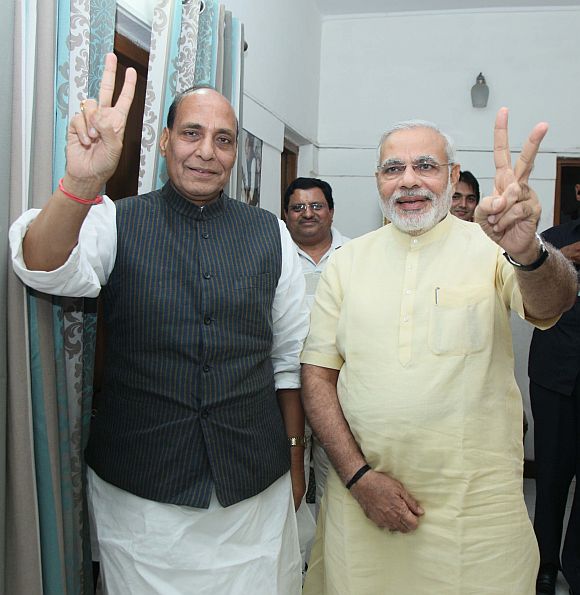 Modi, considered a polarising figure in the country's politics after the 2002 post-Godhra riots which his detractors alleged had happened with his sanction as chief minister, said in a tweet that Advani has given his "blessings" to him after Singh's announcement.

"Senior leaders have reposed faith in me. We will leave no stone unturned for Congress-mukht bharat nirman (building India free of Congress).  Thanks for support and blessings," he said in another tweet message.

Sunday's decision of BJP could be seen as a gamble to perk up the party's prospects after its defeat in two consecutive Lok Sabha elections.

The announcement of Modi's elevation towards the end of Singh's valedictory address at the National Executive session was received with cheers and standing ovation.

One of the delegates said there was clapping for five minutes as a signal of acceptance of the decision on Modi.