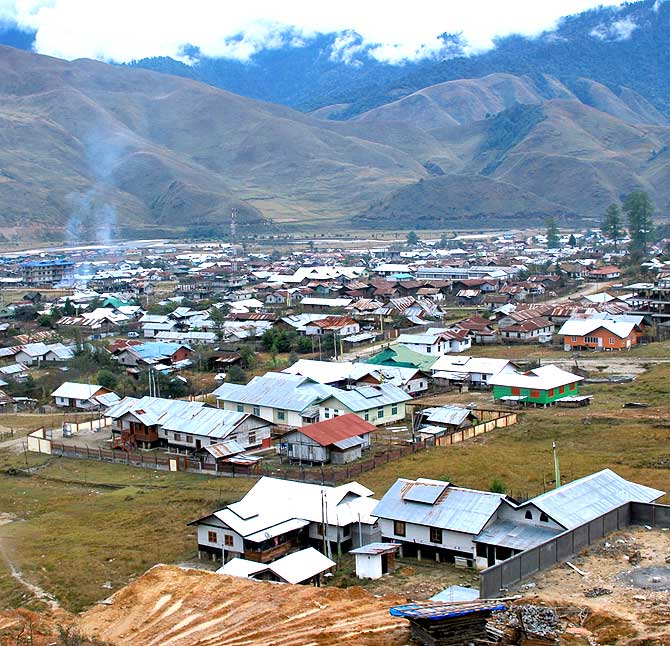 'There is still no road on the last 37 km between the McMahon Line and Menchuka in Arunachal Pradesh. Ironically, during my visit, Beijing announced the opening of a 117- km highway linking Metok, located just north of the McMahon Line.'

'My local friends kept saying with some envy in their voices, "The Chinese are very much in advance on us".' Claude Arpi on a recent visit to the last large village before the McMahon Line that divides India and China.

India should take a lesson from what China thinks and does, as there is no doubt that the Chinese are better planners than Indians.

Already when he was heir apparent, Xi Jinping stated: 'We must implement Mao's strategic concept of the 'unity between soldiers and civilians" and both the army and regional civilian authorities should assiduously pool our resources in the preparation for military struggle.'

What does it mean?

It signifies that the civil administration as well as the private sector should participate in the nation's preparedness to defend its borders.

Chairman Mao was an ardent advocate of 'The synthesis between the requirements of peacetime and war.' In other words, civilian infrastructure projects like airports, roads and railways should be designed to serve both peace and war needs.

It is not that Indians are unable to think far ahead. Sardar Patel had a far-sighted vision about Indian border issues.

On November 7, 1950 (just five weeks before he passed away), he wrote to Nehru on the following requirements:

It is sad that nothing was done then, or later, on the issue of border development, even after the tragic events of October-November 1962.

'The Chinese are very much in advance on us' 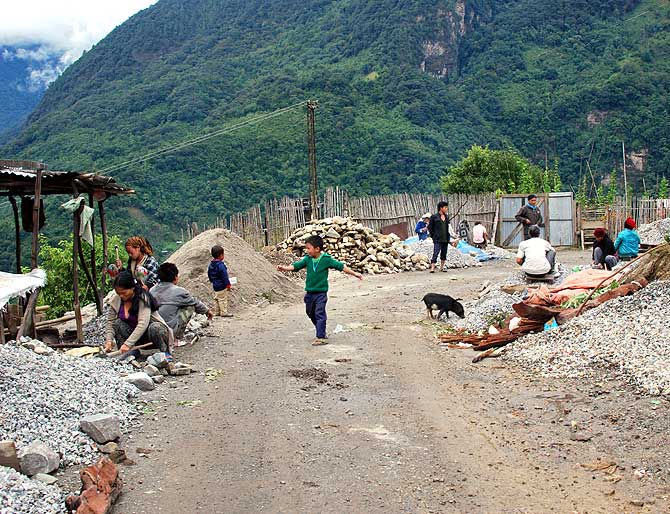 I recently visited Menchuka, the last large village before the McMahon Line dividing India and China in West Siang district of Arunachal Pradesh.

The area, located some 50 km from the Line of Actual Control (McMahon Line), was invaded by China in 1962. I was told by old people that the People's Liberation Army stayed for nearly one month in the area; despite this, the local Membas and Adis (known as Lobas in Tibet) have always remained loyal to India.

Today, there is still no road on the last 37 km between the McMahon Line and Menchuka (though I was told the construction may start soon). The situation is much worse in the adjoining sub-division of Manigong.

From Tato, another sub-divisional headquarters, to Manigong, it takes some 7, 8 hours to cover 67 km, and then, there is no road going onward to the border.

Ironically, during my visit to Menchuka, Beijing announced the opening of a highway linking Metok, located just north of the McMahon Line with neighboring Bomi town.

The Communist Party said the 117-km highway, costing $155 million will make the border town accessible for 8 to 9 months a year.

My local friends kept saying with some envy in their voices, 'The Chinese are very much in advance on us.'

China knows good infrastructure can be used during conflict with India 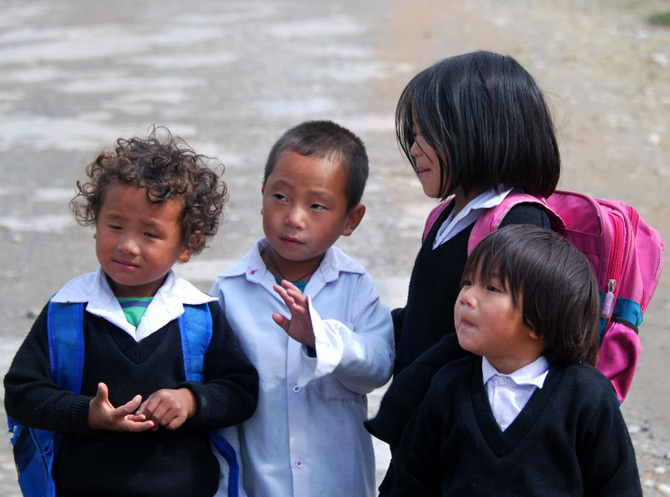 Long ago, Beijing constructed a good quality Regional Highway S-306 in Nyingchi Prefecture. It runs parallel to the LAC (the McMahon Line) following the Yarlung Tsangpo river (known as Siang in Arunachal and Brahmaputra in Assam).

This road joins the 5,476 kilometres National Highway G-318 which runs from Shanghai to Zhangmu on the China-Nepal border.

For the leaders in Beijing, it is clear that 'peacetime investment' in infrastructure and communication can also be used in case of conflict with India. So China is prepared.

In 2009, Xinhua announced that 'Air China will cooperate with the Tourism Bureau of Nyingchi Prefecture to explore the tourist resources in the prefecture and promote the local tourism industry.'

The area is marketed as 'The most Beautiful Nyingchi', 'The Switzerland of China'. Domestic travel agencies, Air China's marketing centres, tourist spots, hotels and restaurants collaborated with the government to build the infrastructure. Guangdong province alone is said to have invested $63 million in Nyingchi's tourism industry.

One million Chinese tourists are expected to visit the region this year.

For India, the new road's closeness to the McMahon Line cannot be ignored 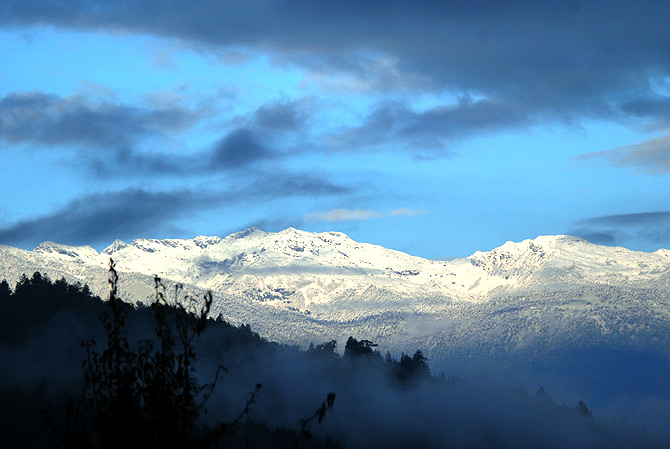 According to official statistics, from January to June of 2013, some $350 million have been invested in the key projects of Nyingchi prefecture, mainly linked with tourism. It represents a year-on-year growth of 115 per cent.

One of the projects is the development of the Grand Canyon area. The 505-kilometre-long canyon, one of the deepest in the world, bends around Namcha Barwa peak and cuts its way towards the Upper Siang district of Arunachal.

The new road to Metok serves the Grand Canyon region.

Xinhua says: 'Mountain paths connecting villages and towns were once the only travel routes in Metok, situated near Tibet's border with India...'

The building of the new road was approved by the State Council, China's cabinet, in 2008 and work officially began in April 2009.

It makes the populations on our side of the border envious: Only four years to open a road in such difficult terrain, with one of the longest tunnels in Tibet! For India, the road's closeness to the McMahon Line cannot (and should not) be ignored.

The local population suffers from the lack of infrastructure 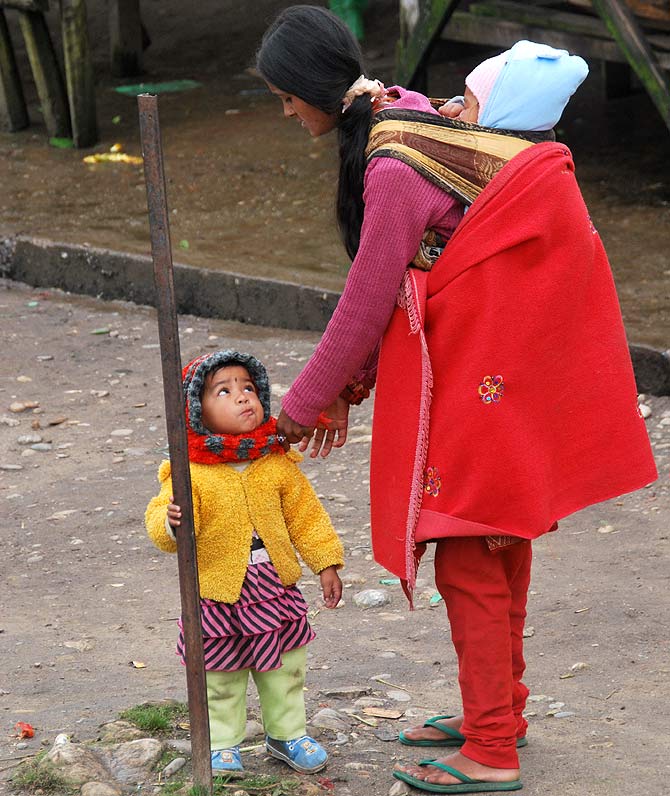 In Menchuka, one hears only regrets. But the situation is even worse in the neighbouring Manigong valley.

One remembers that in August, former BJP MP Tapir Gao had claimed that the People's Liberation Army had intruded at least 30 to 40 km into Indian territory after over-running at least six of the nine Indian check posts in the Chaglagam sector of Anjaw's district.

In most cases, the local population is the first to suffer from the lack of infrastructure, even though the Chinese have treated the indigenous tribes well, telling them: 'You are our people,' in other words, 'Chinese.'

Does not China still call the entire state of Arunachal, 'Southern Tibet'?

The Border Defence Cooperation Agreement signed during the prime minister's visit to China in October speaks of taking 'consequent measures conducive to the maintenance of peace, stability and tranquility along the LAC in the India-China border areas.'

Though assistance 'in locating personnel, livestock, means of transport and aerial vehicles that may have crossed or are possibly in the process of crossing the LAC,' is mentioned, the BDCA mostly deals with 'military' measures.

It does not go further than speaking of 'designated places along the LAC along the India-China border areas' where flag meetings between the two armies can be held.

What about 'flag meetings' between the people from both sides of the LAC who belong to the same communities (mainly Mempas and Adis in Menchuka)?

The opening of 'peeping' spots along the LAC will bring peace 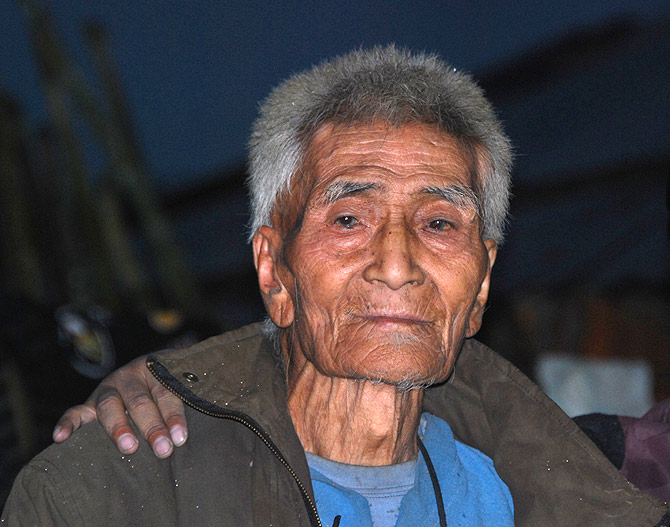 Menchuka, Manigong (West Siang) or Geling (Upper Siang) could be the ideal 'designated' spots. The LAC in these places has the advantage of not being disputed. Menchuka already has the longest Advance Landing Ground which could easily receive civilian aircraft.

As the opening of Nathu-la in Sikkim helped in stabilising the border which had witnessed skirmishes in 1967, and eventually provided thousands of jobs to local youth, likewise, the opening of designated 'peeping' spots along the LAC in Arunachal (and Ladakh) could only bring peace and prosperity in these remote areas.

Chinese tourists could also be invited to have a look at India from the Indian side from the border post.

On the last day of my stay in Menchuka, I met the oldest man of the area; he is 101 years old. He was already a gaon burah (village headman) when the Chinese came in 1962.

When I asked him his most cherished dream, he said: 'Tell the prime minister to reopen the border, I want to visit my relatives in Tibet and bring back yaks; the species has become extinct on this side of the border.'

It is something for the Planning Commission and the central government to think about, but it needs some will to implement.