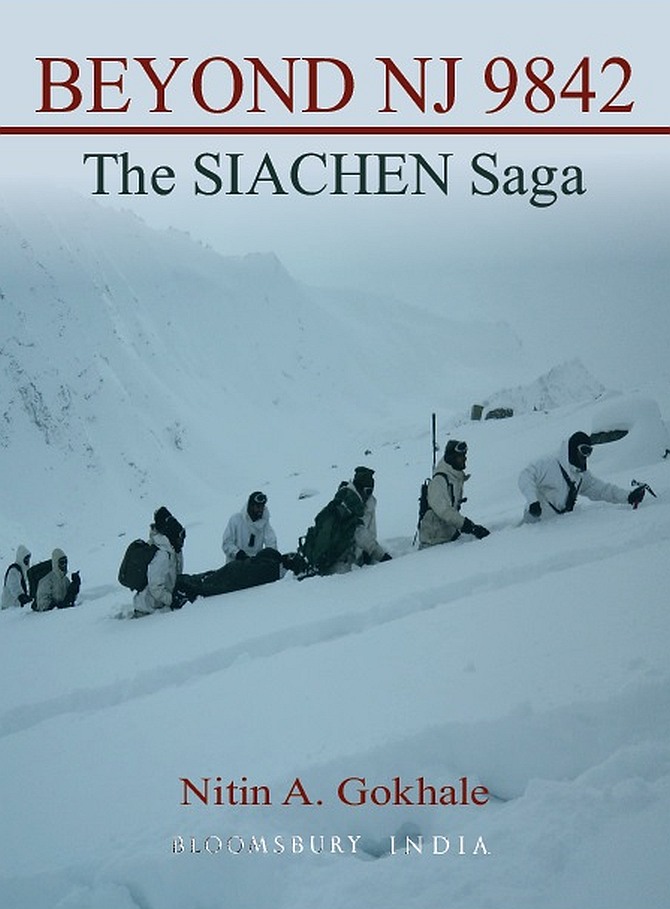 On April 13, 1984 the Indian Army launched a daring operation at Siachen, the world's highest battlefield, to gain control over the glacier in the eastern Karakoram range in the Himalayas.

In the days to follow, Operation Meghdoot -- named after Kalidas's Sanskrit masterpiece -- secured the glacier and adjoining heights from Pakistani aggression.

This operation has continued over the last 30 years with Pakistan making numerous failed attempts to dislodge the Indians from the Saltoro ridge along the western periphery of the glacier.

Nitin Gokhale's book, Beyond NJ 9842: The Siachen Saga is the first of its kind, narrating the history of Operation Meghdoot.

As January 1984 dawned, Northern Command and 15 Corps were furiously working towards launching assault teams atop the Saltoro ridge, the prominent watershed west of the Siachen glacier.

Fortunately for 15 Corps headquartered in Srinagar then-as now-insurgency in the Kashmir Valley was still some five years away.

Most of its deployment was along the LoC stretching from Poonch right up to NJ 9842, running through Drass, Kargil, Batalik, Chorbatla and Turtuk. Unlike today, 15 Corps was also responsible for the defence of Eastern Ladakh bordering Tibet.

Raising another Corps to look after Ladakh or induction of another Division -- the 8 Mountain Division in the Kargil-Drass-Batalik area -- was not even on the horizon in 1984.

The 3 Infantry Division with its HQ in Leh had two brigades (70 located at Kairi to hold south-eastern Ladakh, 114 to look after North-eastern Ladakh) and a Sector Headquarter (26, headquartered at Partapur for areas beyond Khardung La) under its command. The 3 Infantry Division was thus effectively in-charge of the area beyond Zoji La right up to Sasoma.

Two years after Operation Meghdoot was launched, the 3 Infantry Division was stretched to its limits in defending both the Pakistan and China fronts. So one more formation -- 28 Division -- was raised in 1986 at Nimu, not very far from Leh.

In a peculiar arrangement, 28 Division was given charge of the Kargil-based 121 (Independent) Infantry brigade and the Siachen area.

This arrangement continued till 1991 when 28 Division was shifted to Kupwara in North Kashmir after full-fledged insurgency gripped the Kashmir Valley starting 1989.

That is the time the Siachen Brigade reverted to 3 Infantry Division!

It was only after the 1999 Kargil conflict that the 8 Mountain Division was inducted into Kargil and 14 Corps was raised in Leh.

3 Infantry Division moved to Karu, an hour's drive from Leh and automatically came under the 14 Corps ORBAT (Order of Battle).

But more of that later. 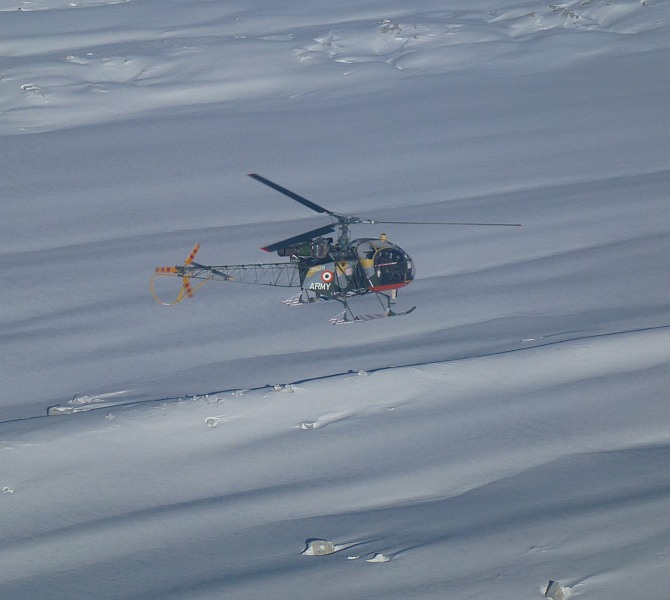 The focus was on occupying Indira Col, Sia La and Bilafond La, the most prominent passes on the Saltoro ridge, as early as possible.

As his Staff and Commanders on the ground prepared to launch operations, General Chibber wrote a detailed letter to the Army Chief, General A S Vaidya, in January 1984 seeking his approval for the operation.

One of the highlights of the plan was to designate 79 Mountain Brigade Group in 15 Corps as the 'Himalayan Brigade' for operations in the snow bound regions.

The force, according to the Northern Command plan, was to be equipped with specialised clothing and skiing equipment.

General Chibber's note to Army HQ suggested that the type of equipment for the proposed Himalayan Brigade had to be on the lines of the ones that were being procured from abroad for troops who were to be involved in Operation Meghdoot.

'Besides organising and tailoring a specialised task force, it is essential to provide it a dedicated helicopter unit equipped with Mi-8 and Cheetah helicopters. Fire support from armed helicopters and air photos for areas of interest is also recommended.'

'Logistics infrastructure in the form of air maintenance and road communications from Sasoma to base camp, construction of helipads at the Base Camp and Sasoma and construction of fibre glass shelters is also planned,' the Northern Command note recommended.

General Chibber followed up his letter to the Army Chief with detailed discussions of the plan with General Vaidya and the DGMO, Lieutenant General Somanna at Army HQ on February 9, 1984. 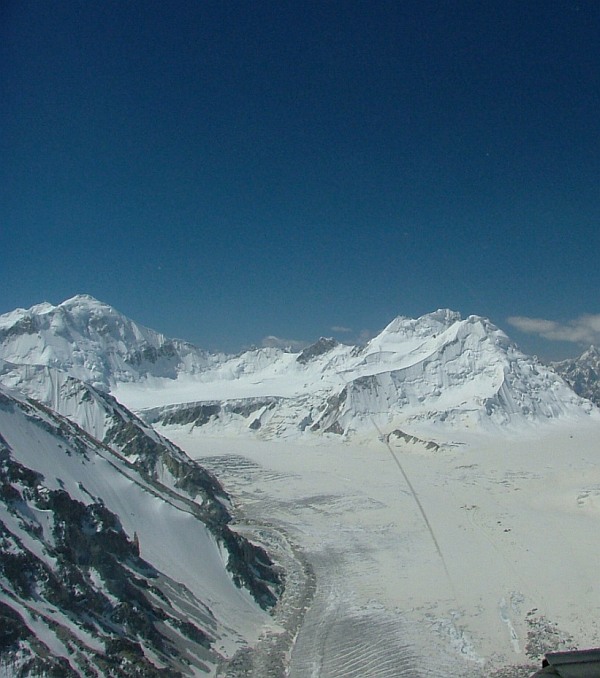 General Chibber returned to Northern Command HQ in Udhampur and called Lieutenant General Hoon to firm up plans for the operation.

These five officers pretty much comprised the top brass of Northern Command in 1984. After day-long deliberations, punctuated only by a working lunch, major operational decisions were finalised.

None of them would have anticipated that they were about to order a military action that would turn into India's longest running operation which had no precedent in military history!

Among the major decisions taken at the February 14 meeting in the Northern Command HQ was the proposed composition of the force for Operation Meghdoot.

The brass earmarked one company plus a platoon of the Ladakh Scouts and one company of 4 Kumaon with supporting elements as the basic force for the Operation.

Lieutenant Colonel Pushkar Chand, Commanding Officer of 1 Vikas, was appointed as the Task Force Commander for Operation Meghdoot. His location was to be at the Forward Logistics Base or FLB at about 16,000 feet. 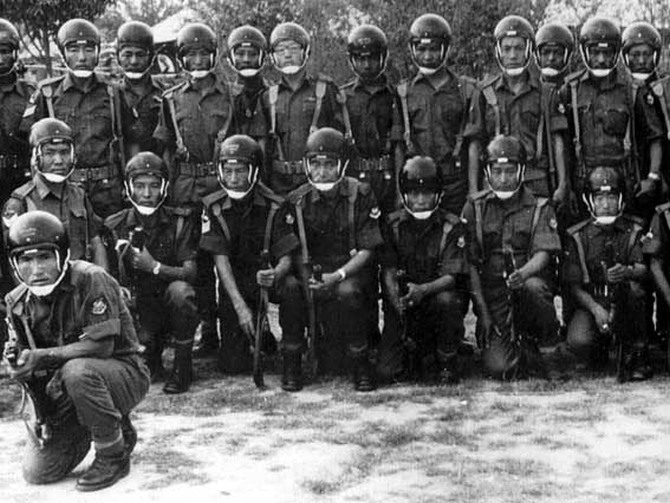 The Northern Command also designated a company of 19 Kumaon under its Commanding Officer to be located at Sasoma for any contingency.

There is an interesting aside here. The Vikas battalions -- in 1984, there were two of them under 3 Infantry Division in Ladakh -- are part of the ultra-secretive organisation now known as the Special Frontier Force.

Created in 1962 under code name 22 Establishment, the Special Frontier Force remains the subject of much speculation and little concrete information.

The SFF was supposed to keep an eye on Chinese military movements along the Indo-Tibet border and gather as much intelligence as possible.

In the event of war, operating in companies, the SFF was intended to be 'forward screens' for the Indian Army.

It is trained in special operations, has the skills of paratroopers, and according to insiders is able to conduct conventional airborne assaults ahead of ground forces in areas such as Aksai Chin.

The SFF recruits both ethnic Tibetans and Gorkhas.

While Tibetans can, and do become officers, regular Indian Army officers on deputation provide the leadership. The Inspector General, head of the organisation based at Chakrata near Mussorie, is usually a Major General rank officer of the Indian Army. 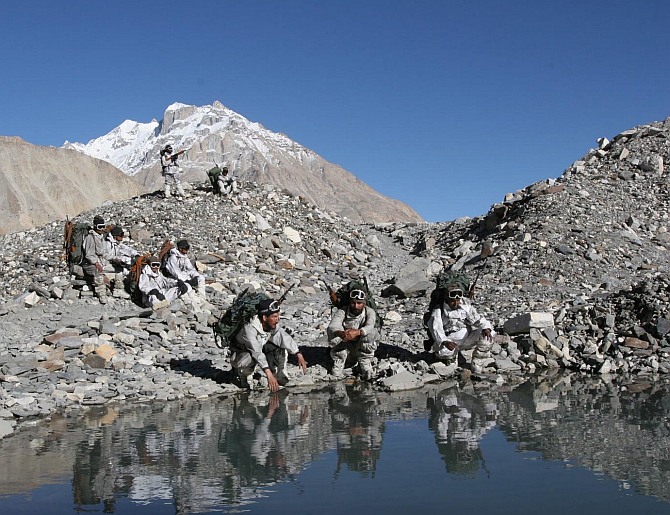 Currently, there are at least 2 Vikas battalions under the Leh-based 14 Corps deployed in Ladakh.

Lieutenant Colonel Pushkar Chand was commanding one of the two Vikas battalions in 1984 when he was designated Task Force Commander for Operation Meghdoot.

So, as the designated troops got down to training and equipping themselves for what looked like a formidable task, Army HQ gave its final go ahead for Operation Meghdoot vide letter No A/35501/XM03 of 31 Mar 84. Tasks listed out in the directive were:

From the directive it was clear that the Army HQ wasn't looking to launch any offensive against Pakistan, but was simply planning deployment to hold on to the heights on the Saltoro ridge. There were sound reasons for this directive.

The India of 1984 was much different from the country we see today. 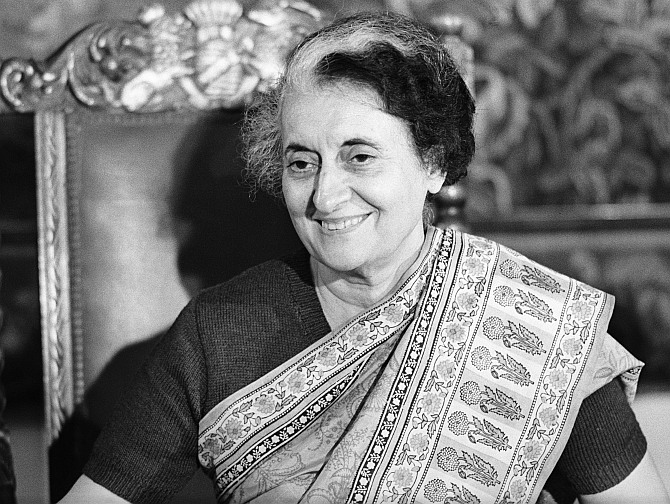 Mrs Indira Gandhi, after a spell out of power between 1977 and 1980 had once again become Prime Minister. Governing India has never been easy. But the 1980s were particularly bad.

Punjab was aflame with calls for a separate Khalistan; Assam was in turmoil because of the anti-foreigners agitation; insurgencies in Nagaland, Manipur and Mizoram were keeping a large number of Indian Army troops busy.

India could not afford another war with Pakistan.

So when Mrs Gandhi was briefed about Pakistani intentions beyond NJ 9842, her directive was simple: Secure Siachen, but prevent wider escalation with Pakistan.

Since the directive was limited, Northern Command too planned the operation on a limited scale.

The brass was clear that the key to success would be the Indian Army's ability to occupy Sia La and Bilafond La in particular before Pakistani columns could.

The planners were also fully convinced that troops for the initial deployment in these locations had to be heli-lifted and maintained by air.

Significantly, Northern Command records of the time show that the initial plan was to withdraw troops from those altitudes around August 31, 1984 unless the situation warranted otherwise.

Now we indeed know that the situation did warrant troops staying on in these passes not only for the duration of that winter, but round the year for the past three decades!

There is another school of thought, which, with the benefit of hindsight argues that India could have held on to three main passes on the Saltoro ridge instead of extending its deployment and widening the conflict.

Northern Command records of the time have complete details of how it became necessary to station troops on those murderous altitudes after Pakistan made it a prestige issue to try and wrest back the Saltoro.

As Northern Command and 3 Infantry Division mulled over the likely date of launching the Operation, the task force under Lieutenant Colonel Pushkar Chand was busy acclimatising.

It moved to Sasoma by March 28, 1984. The task force concentrated at base camp by April 3 and commenced ice training.

By that time, the infrastructure required for the launching of the operation was being steadily built, and high altitude huts to cater to essential accommodation at the base camp were nearing completion. 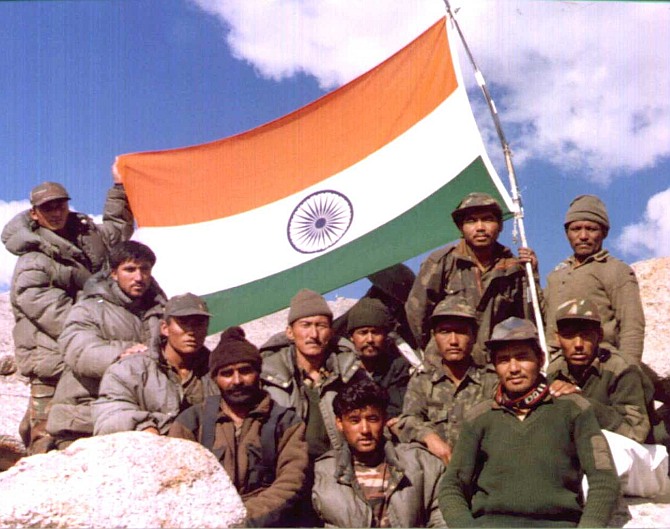 The helipad for Mi-8 helicopters was also being constructed. Dumping of aviation turbine fuel was among the top priorities since helicopters would play a major role in sustaining the deployment on the glacier.

According to records of the time, the Indian Air Force in the meantime was busy transporting supplies. It was tasked to lift 461 tonnes of material by fixed wing aircraft. Out of this, 73 tonnes was to be airlifted from Srinagar to Thoise between 19 March and 7 April.

The remaining 389 tonnes was planned to be lifted from Srinagar to the Dropping Zone during April to August 1984.

Mi-8 helicopters were entrusted to airlift 74 tonnes of goods and drop them to the base camp in the period between April and August 1984.

The lighter Cheetahs were made responsible for lifting 30 tonnes from Sasoma to FLB and 79 tonnes from base camp to assault camp.

The logistics were getting organised systematically. For an operation that had no precedent in the world, every small decision had to be weighed carefully before being implemented.

Supplies in place, everything seemed ready for Operation Meghdoot, except the specialised snow clothing for the first assault teams that were to be airdropped at Bilafond La and Sia La!