Ruling Bharatiya Janata Party and opposition Congress on Wednesday clashed in Lok Sabha over communal riots in the country with both parties accusing each other of pursuing a divisive agenda and questioning secular credentials.

Initiating the discussion on 'Need for more effective mechanisms to deal with communal violence', Leader of Congress in Lok Sabha Mallikarjun Kharge alleged that over 600 riots had taken place in various parts of the country in two months after Narendra Modi government came to power.

Amid strong protests by ruling benches, he suggested that BJP and its affiliates were trying to "divide the society" to retain power and warned that if it was not controlled, "we will repent".

Naming VHP and Bajrang Dal and referring to certain comments made by RSS chief Mohan Bhagwat, Kharge said the "communal forces" had got emboldened after BJP came to power as they feel that they have "political power" now and would be protected.

"We talk about uniting the society, you talk about dividing the society. You divide the society on the basis of religion and implant your principles on suppressed sections like minorities so that they remain away from power," the Congress leader told BJP.

He said while BJP was accusing Congress of indulging in "vote bank politics", the truth was the other way round. 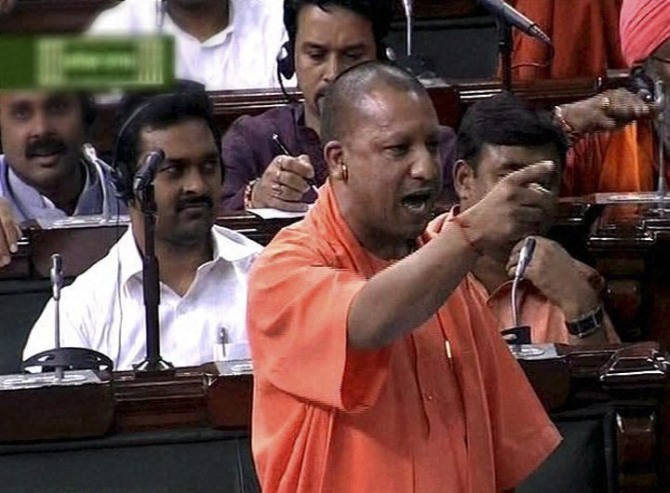 Hitting back at Congress, BJP leader Yogi Adityanath said, "You claim you are secular but the agenda you implement is communal."

The House took up a debate on the communal violence nearly a week after Congress Vice President Rahul Gandhi led his party members into the Well to demand urgent debate on the issue.

Adityanath said there have been thousands of riots during UPA rule and even before that 3.5 lakh Kashmiri Pandits were driven out of Kashmir but Congress remained silent.

The BJP leader also referred to communal violence in Assam and anti-Sikh riots of 1984 in Delhi to target Congress.

He suggested setting up a Special Investigative Team (SIT) headed by Supreme Court judge to probe all communal incidents to unravel who was behind these.

Asserting that Hindu philosophy is 'live and let live', Adityanath said in recent times, there have been conspiracies against Hindus.

There are more than 12 lakh sadhus and saints in the country but Imams were given allowances, he said and wondered "whether this is secular".

He also criticised the Uttar Pradesh government's efforts to withdraw criminal charges against "terrorists", a move which was eventually stopped by court.

He also said that Congress and the Left had joined hands and held a special sitting of assembly to demand release of the main accused in the Coimbatore bomb blast, evoking protests. 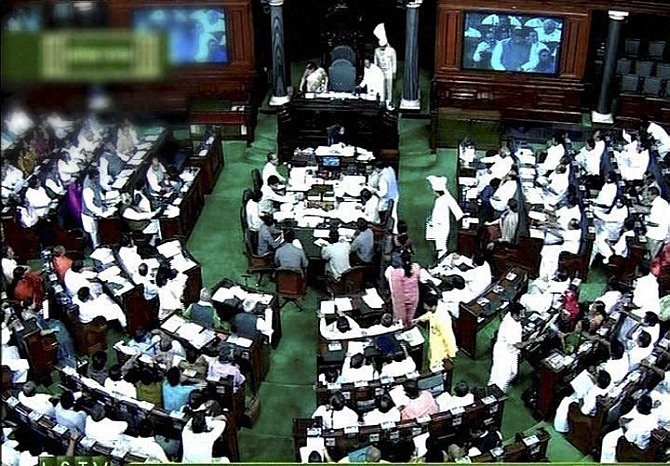 Taking offence to certain remarks made by Adityanath, Congress member K C Venugopal raised point of order. Deputy Speaker M Thambidurai assured the member that the matter would be looked into and if necessary those remarks would be expunged.

AIMIM member Asaduddin Owaisi also tried to raise point of order saying that figures of communal violence incidents mentioned by Adityanath were wrong but Thambidurai did not entertain the demand, saying he could speak on it when he gets the chance.

Earlier, Kharge said BJP should not claim to be "thekedar" (contractor) of any particular community as the country belongs to all religions, castes and creeds.

"Only because you got government does not mean that you will suppress others," he said, while alleging that BJP was indulging in "polarisation" for votes, including in Bihar.

When Adityanath suggested SIT probe into the riots, some Congress members were seen saying it should be done.

Even as BJP questioned his figure of 600 riots since Modi government came to power, Kharge accused the central government of ignoring the communal violence even while acknowledging that law and order is the responsibility of a state government.

He then quoted government figures and said 113 incidents had taken place in May and June in which 15 people were killed and 318 injured. He also cited some incidents with dates, including in Bhuj area of Gujarat. 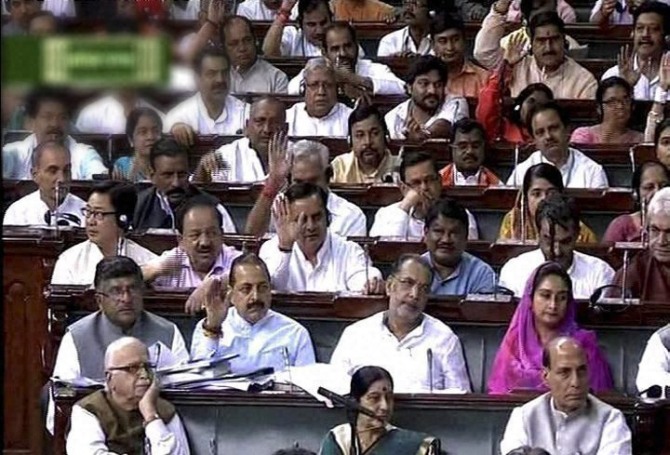 "Why are these incidents happening now? What is the reason? Who is behind these? These have increased in the last 2-3 months since the new government came. This is not a good sign," the Congress leader said while alleging that BJP did not want harmony in the society.

Suggesting the involvement of BJP, he said the riots were not taking place in states like Tamil Nadu, Andhra Pradesh and Kerala where "they don't have the strength".

He said there is no analysis as to why these incidents were taking place. He said the Centre should have convened a meeting of Chief Ministers of the states to discuss the issue.

"I am not saying that you (BJP) directly did it (riots). But why are these incidents happening only after you came to power? Don't divide the society," Kharge said.

Accusing the UPA government of having being failed "miserably" in enacting the Prevention of Communal Violence Bill, he said these days religion is being used as a weapon to fight with people.

He said people think they are "thekedar (contractor)" of a particular religion, but such feelings should not exist as it leads to intolerance.

Rahul, who was present during the discussion, went up to Salim and shook hands with him.

She said Muslims have become victims of state establishments as even after so many incidents of communal violence the state machinery is unable to find a solution to the problem.

The rise in instances of terrorism is because terrorists know that no step would be taken against them, she said, adding the system of the country should be people-friendly to include interest of minorities.

Talking about vote bank politics to appease minorities, Tariq Anwar (NCP) said no party can win election just on the basis of such type of minority politics.

He said the law makers are elected by the people and not to represent the religion.

Warning against playing with religious sentiments, Anwar said we should not take any step which will benefit the enemies of the country.