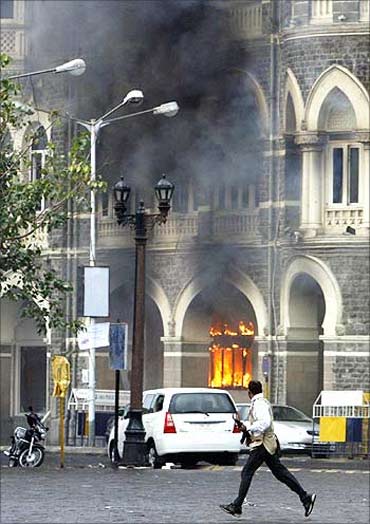 Image: The Taj Mahal Hotel in Mumbai during the 26/11 attack
B Raman

The United States charged four more Pakistani conspirators with carrying the 26/11 Mumbai terror attacks. The second superseding indictment filed by the federal prosecutors before a Chicago court on Monday, revealed how the attacks were planned since 2005. In a two part series, rediff.com explains in detail the meticulous 26/11 conspiracy.

In an indictment filed before a Chicago court on April 25, the Federal Bureau of Investigation has for the first time revealed the identities of four of the ringleaders of the Pakistan-based conspiracy for the planning and execution of the 26/11 terrorist strikes of 2008 in Mumbai.

In previous court documents including the indictments against David Coleman Headley and Tahawwur Hussain Rana of the Chicago cell of the Lashkar-e-Tayiba and the plea bargain statement of Headley, these four individuals had throughout been described as follows:

The previous court documents did not give their identifying particulars. The latest indictment of April 25 enables one to identify them as follows: 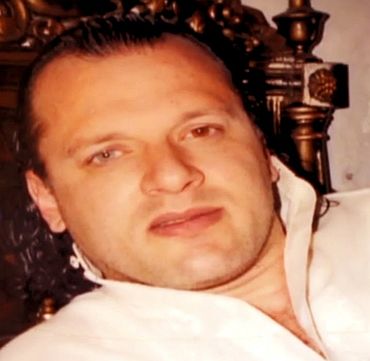 Connecting these names with the earlier narrative in the court documents, the following reconstruction is possible:

Between late 2005, and till his arrest on October 3, 2009, Headley conspired with Sajid Mir, Abu Qahafa, Mazhar Iqbal and Major Iqbal and "others known and unknown to the grand jury, to deliver, place, discharge and detonate explosives and other lethal devices in places of public use, state and government facilities, public transportation systems, and infrastructure facilities in India, with the intent to cause death and serious bodily injury, and with the intent to cause extensive destruction of such places and facilities and where such destruction would likely result in major economic loss."

Around late 2005, Sajid Mir, Qahafa and Major Iqbal told Headley that he should travel to India to carry out surveillance of potential targets for attack by the LeT and that he should take steps to conceal his association with Pakistan and his Muslim religion during his travels in India.

In February 2006, in Philadelphia, Pennsylvania, Headley changed his original name of Daood Gilani to David Coleman Headley in order to facilitate his activities on behalf of the LeT by enabling him to present himself in India as an American who was neither Muslim nor Pakistani.

In the spring of 2006, Sajid Mir and Major Iqbal discussed with Headley the idea that he could open an immigration office in Mumbai, as a cover for his surveillance activities in India.

In June 2006, Headley traveled to Chicago, informed Rana of his assignment to perform surveillance for potential targets in India, and obtained Rana's approval for opening a First World office in Mumbai, as cover for these activities. Rana directed an individual associated with First World to prepare documents to support Headley's cover story. Rana also advised him on how to obtain a visa for travel to India. In applying for his visa for travel to India, Headley misrepresented his birth name, father's true name, and the purpose for his travel. 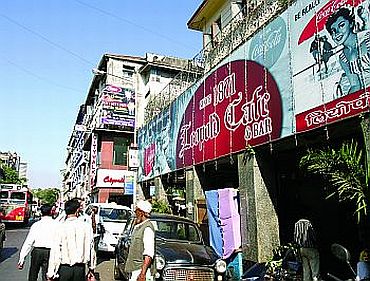 In July 2006, Person A provided Headley approximately $25,000 to, among other purposes, establish and operate the Mumbai office of First World and pay for living expenses while he  carried out his assignments for the LeT in India.

In September 2006, February 2007, September 2007, April 2008, and July 2008, Headley travelled to Mumbai for extended periods for conducting surveillance of possible targets of attacks by the LeT, using his association with First World as cover for his travels. Prior to his departure for each of these trips, Sajid Mir, Person A and others, instructed Headley regarding locations where he was to conduct video surveillance in and around Mumbai, as well as other locations in India.

After each trip, Headley travelled to Pakistan, where he met Sajid Mir, Person A and persons associated with the LeT to report on the results of his surveillance, and provided Sajid Mir and Person A with photographs and videos from the surveillance.

Prior to Headley's surveillance activities in India starting in September 2006, Sajid Mir and Person A instructed him settle in India by opening the business and obtaining an apartment, and to take photographs and make videos of various locations of public significance in India, including but not limited to the Taj Mahal Hotel in Mumbai. 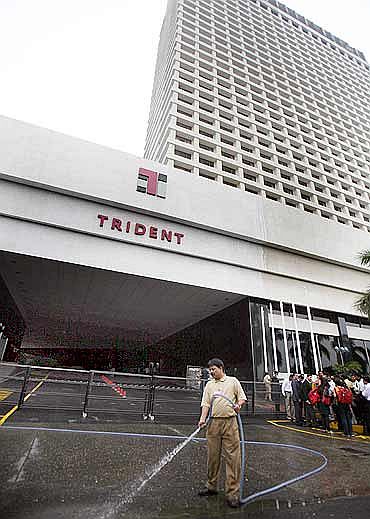 Prior to the surveillance activities in India starting in February 2007, Sajid Mir and Person A separately instructed him to conduct surveillance of the second floor of the Taj Mahal hotel in Mumbai, specifically including the conference rooms and ballrooms.

In February 2007, Headley conducted surveillance on behalf of the LeT, including taking pictures and making videotapes, of various targets in India, including but not limited to the Taj Mahal hotel (where he made detailed videos of the second floor conference rooms and ballrooms), and the Oberoi hotel, both in Mumbai.

Prior to the surveillance activities starting in September 2007, Sajid Mir and Person A separately instructed him to conduct further surveillance of the second floor of the Taj Mahal hotel, specifically including the conference rooms, and to obtain schedules of future conferences at the hotel.

Following these surveillance activities, he travelled to Pakistan, where he met with Sajid Mir and Person A, and provided them with accounts of his surveillance. During one the meetings with persons associated with the Lashkar, Sajid Mir displayed to Headley a styrofoam mockup of the Taj Mahal hotel. During a meeting with Person A, he was provided with approximately $2,000 worth of Indian currency for expenses in connection with activities in India. 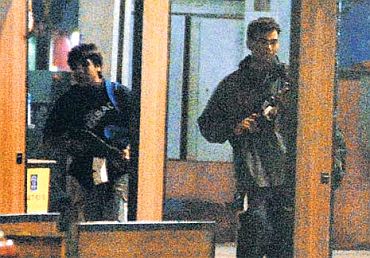 In March 2008, Headley met with Sajid Mir and Qahafa and other persons associated with Lashkar, and discussed potential landing sites for a team of attackers who would arrive in Mumbai by sea. Sajid Mir and other persons associated with the LeT instructed him to take boat trips in and around the Mumbai harbour and to take surveillance video of various locations. Sajid Mir also provided him with approximately $1000 worth of Indian currency to use for his expenses in Mumbai.

In March or April 2008, Sajid Mir and Qahafa provided Headley with a global positioning system device. They showed him how to enter locations into the GPS device and instructed him to use it to record the locations of possible landing sites.

Prior to Headley's surveillance activities in India starting in or about July 2008, Sajjid Mir instructed him to conduct further surveillance of various locations in Mumbai using the GPS device, which was returned to him. Sajid Mir and Qahafa discussed with him the need to do further surveillance of the Taj Mahal hotel and landing points for the attackers, including videotaping the route from a police station to the Taj Mahal hotel. Both Sajid Mir and Person A separately instructed Headley to conduct videotape surveillance of the Chabad House, a Jewish community center located in Mumbai.

In June 2008, Person A provided to Headley additional funds of approximately $1,500 worth of Indian currency to keep open the First World office in Mumbai, but approved closing that office in the future and opening a new business in Delhi,  to be used as cover for future activities.

In July 2008, Headley conducted surveillance, including taking pictures and making videotapes, of various targets, including but not limited to, the Taj Mahal hotel, the Chabad House, the Chhatarapati Shivaji Terminus train station, the Leopold Caf and various landing sites, and entered various locations into the GPS device. 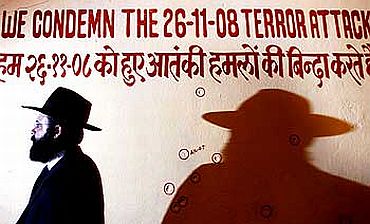 In July and August 2008, Qahafa and others were training a number of young men in Pakistan in various skills and tactics to be used in carrying out terrorist attacks in Mumbai, including combat tactics, room entry, hostage rescue, nautical training and swimming.

Following the November 2008 attacks, Person A advised Headley to avoid contact with him until further notice and to remove any incriminating materials from his home in Pakistan. In June 2008, Al Qaeda, through As Sahab Media, took credit for an attack on the Danish embassy in Islamabad and called for further attacks against Danish interests to avenge the publication and re-publication of the cartoons of the Prophet Mohamed.

In August 2008, Al Qaeda released a video (the Al Qaeda video) through As Sahab Media calling for further attacks in retaliation for the publication of the cartoons. Mustafa Abu al Yazid of Al Qaeda, among others, appeared on the video.

Ilyas Kashmiri was an influential leader of the Harkat-ul-Jihad-al-Islami. Beginning in 2007, Kashmiri based his operations in the Federally Administered Tribal Areas of Pakistan. He was in regular contact with Al Qaeda and in particular with Mustafa Abu al Yazid, aka Sheik Said al Masri.

Abdur Rehman Hashim Syed was a resident of Pakistan and former member of the Pakistani military who was associated with Kashmiri and Sajid Mir. Between October 2008, and October 3, 2009, Kashmiri, Syed, and Headley, conspired with each other, and others known and unknown to the grand jury, to commit acts outside the United States that would constitute the offenses of murder and maiming if committed in the special maritime and territorial jurisdiction of the United States, namely, murder and maiming in connection with an attack to be carried out against the facilities of the Jyllands-Posten newspaper, located in Denmark, and at least two of its employees.