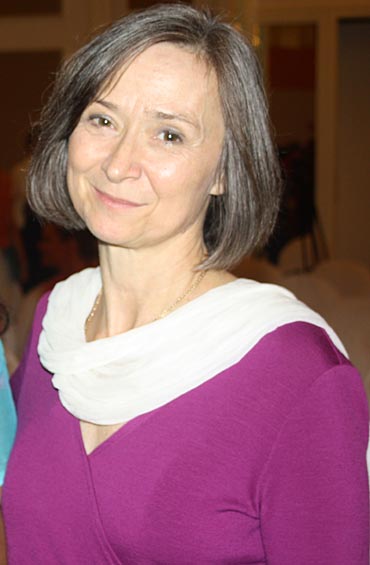 Last year's commemorations of 26/11 terror attacks, across Mumbai, on its first anniversary were often painfully sad. The ceremonies held all over the city brought one quickly to tears. Or they were full of anger. But the second anniversary of 26/11 seems to represent a more positive spirit.

As my colleague Reuben correctly says, "It is a new day."

It is a new day in India's calendar -- like Gandhi Jayanti or Republic Day -- that people are choosing in 2010 to mark in some special manner or another.

Many a Mumbaikars would not let 26/11 go by unmarked. But they chose their own ways to remember the day.

And most of them were very positive. Donate blood. Play music. Light a candle. Hold a peace march. Skate, attend a conference on peace. Pray. Visit the Gateway of India.

But the most positive celebration of all was held on Friday evening at the Trident Hotel, Nariman Point, the scene of death and despair two years ago.

It was hosted by a serene, brave ambassador of positivity -- Kia Scherr and her new foundation. 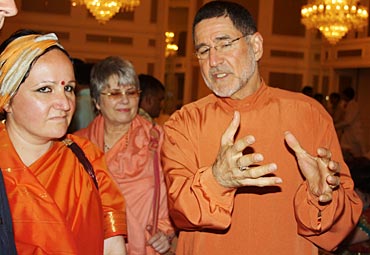 Kia Scherr is herself a double-victim of the 26/11 carnage. Two years ago Kia lost her 13-year-old daughter Naomi and her husband Alan Scherr on November 26.

Father and daughter had come to India in 2008 on a spiritual journey along with a group of other Americans and Canadians belonging to the Synchronicity Foundation, shepherded by modern meditation guru Master Charles Cannon. They both were shot dead in the Tiffin restaurant at the Trident.

Kia painstakingly picked up the shattered pieces of her life and glued them together, helplessly looking for a message. And out of that loss she found a new life, and a new meaning.

She discovered that though she had lost her husband and daughter her love for them lived on and was immortal and that could never be taken away. She also learned that nothing in life was more important than life itself, and felt she had to spread this message by launching her One Life Alliance on November 26, 2010.

Friday evening's celebration at the stylish Regal room of the Trident Hotel, after high tea with tiny delicate snacks -- attended by a cross section of city dignitaries, spiritual seekers, survivors, teachers and youth -- was a mix of religion, thought, patriotism, music and art.

Kia began the evening in a soft-spoken gentle voice, "This evening we come together in love but also sorrow. Great to see all your smiling faces. I have been here in Mumbai for two months now. I came to create this evening with many others so that we could create a positive outcome to a tragedy that cut deep into the heart of the city of Mumbai because we value life itself. We mourn the loss of those who lost their lives in the Mumbai terrorist attacks. "

"But yet the love that we feel for those lives on in our hearts. And it is out of that love that we honour the sacredness and oneness of life. Out of that an organisation was born to inspire that conversation and spread that message in as many ways as possible throughout the world. Something that I found very comforting strengthening. That I found very comforting. In the early days we had many conversations that there was indeed a message to share. Twelve of those survivors (of the trip to India in 2008 with Master Charles) are here with us now. They came back this week. They came back because they are also committed to creating a positive outcome. So that something good can come from this." 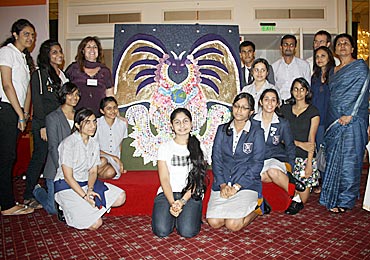 Kia's two months of work was reflected in the elegant choreography of the ceremony that spanned the range of human emotions -- except anger and revenge, of course, which were left outside the door uninvited -- allowing the audience to alternate between elation and thoughtful reverie.

Speeches. Verses from the Bhagwad Gita in song form. And the Koran. Songs. Prayers. The national anthem.

The vice chancellor of the University of Mumbai, Ranjan Welukar spoke first. "I am standing here to tell Kia and the survivors (of 26/11) who lost their dear ones that they are not alone. We all are with you." He appreciated Kia's and the One Life Alliance's positive energy and said his job was to accelerate that positive energy.

The principal of HR College of Commerce and Economics and the sheriff of Mumbai, Indu Shahani spoke about how she learnt the message of 26/11 from her students who began to use that sad date in the nation's history to go out and give back to society because 26/11 gave them the desperate urge and feeling to do something (rather than curse the tragedy).

HR student Jyotirmoy Chatterjee started a programme shortly after 26/11 to provide solar lights to villages without electricity. Chatterjee came to tell Shahani today that he had now, two years later, been able to supply light to 1,000 homes in 33 villages.

Another group of students invited her to participate in a blood collection drive on Saturday to mark 26/11. "The best way to remember this day is to forget the negativism, to forget there is something like terrorism in the world and to counteract it with a lot of positivism, with a lot of passion and a lot proactivity." 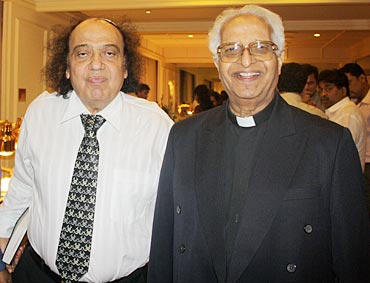 Religious leaders of the Hindus, Jews, Muslims and Christians added their words of wisdom. Swami Vishveshwaranand Giri Ji Maharaj of the Sanyas Ashram in Vile Parle, and of several ashrams in Haridwar, felt that 26/11 should be a set aside as a day dedicated to peace and non-violence.

American-born Swami Shankarananda, who established the Shiva School of Meditation and Yoga in Melbourne said that the teachings of Swami Muktananda Paramahansa have taught him that "The human heart is best used for love. Hatred is a perversion of the human heart. From great loss comes great love."

Moulana Muhammad Shoeb Koti, Islamic scholar and general secretary of the All India Tehrik e-Zakat movement, recited a verse from the Holy Koran that stated that if a man kills another man it is as if he has killed mankind entirely. Father Anthony D'Souza from St Xavier's College emphasised the importance of the "one great human family that God created Each of us should do the things god wanted us to do for this human family We today are called to be the voice of god to spread this message of peace, love, hope and joy."

Solomon Sopher, president of Bombay's Baghdadi Jew community sang a few Hebrew verses from the Old Testament and asked everyone to remember that God only made man but it was man who made religion.

He felt that 26/11 had been the worst day of his life. He also recalled the day, shortly after 26/11, when Moshe Holtzberg attended the funeral ceremony for his parents at the Knesset Eliyahoo Synagogue, Fort, south Mumbai and began to cry for his mother. "If a terrorist had been there he to would have (wept with all of us)." 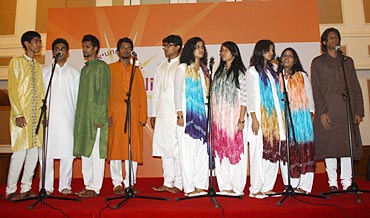 Master Charles spoke of the decade plus that he spent in India absorbing lessons of Hinduism under his guru in Ganeshpuri and how on one of his trips back to India he happened, by some stroke of karma, to be caught in 26/11.

When Master Charles returned to the US and spoke about his group's ordeal in Mumbai to the world media suddenly there was a special new interest in the Synchronicity Foundation and what it stood for and enquiries on how to become part of it. That led him, Kia and the survivors of the group to launch the One Life Alliance to emphasise the sacredness of life.

He said, "Hopefully we as a global humanity may (learn to deeply honour) the value of the life we all share. In these times, in this world, we must find our unity. The life that empowers me in this room also empowers each and one of you and every human being on this planet. And through our unity we may resolve our separation and conflict and create a more peaceful world Thank you so much for receiving us again into your country with great love."

Through short, emotional video clips, the survivors of 26/11 from Master Charles' Synchronicity group spoke about what life meant to them.

At the end author and illustrator of children's books Linda Ragsdale, a survivor of 26/11 (who now lives with a three foot scar) unveiled a tapestry of hearts drawn by Mumbai school children etched into the shape of a peace dragon with an image of a fertile green earth as its heart.

The students of Cathedral and John Connon School who helped Linda create the dragon were on hand to unveil the creation, along with their principal Meera Isaacs and art teacher Nanda Das. Ragsdale believes in "inspiring peace through global artworks."

The students of St Andrew's Choir, wearing ethnic outfits, sang like angels. Their soulful medley, rendered by young, vigorous voices, of It's A Wonderful life, Heal the World and We Are the World had the audience particularly moved.